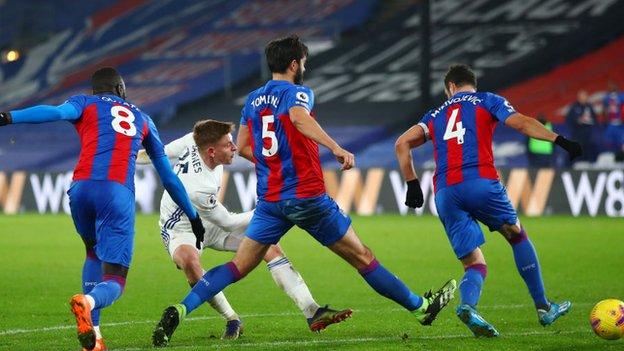 Harvey Barnes struck with seven minutes remaining to rescue a point for Leicester at Selhurst ParkCrystal Palace manager Roy Hodgson said it took an “apoplectic” half-time team talk from assistant boss Ray Lewington to spark them into life in Monday’s draw with Leicester.Coming after a 7-0 thrashing by Liverpool and a 3-0 loss to 10-man…

Coming after a 7-0 thrashing by Liverpool and a 3-0 loss to 10-man Aston Villa, Palace were second best throughout the first 45 minutes and only got to half-time goalless after Vicente Guaita saved Kelechi Iheanachi’s 19th-minute penalty.

“We were dumbfounded that we were as passive as we were,” Hodgson told Match of the Day.

“We were not at all happy with our first half. They were more aggressive than us and we were being pressured into mistakes.”

The hosts were much more combative after half-time, however, and took the lead when Wilfried Zaha finished superbly from Andros Townsend’s cross, only for Harvey Barnes’ second goal in as many games to rescue a point for the Foxes.

“It almost cost [Lewington] a heart attack to produce that energy,” Hodgson said in a separate interview with Amazon Prime. “That is what Crystal Palace want to be and we pressurised the ball so much better.

“We looked dangerous going forward but unfortunately we did not get the full three points because Barnes scored with a wonderful strike.”

Leicester, who made seven alterations to the team that drew with Manchester United on Saturday, registered 17 attempts but failed to test Guaita from open play until Barnes’ late goal.

The visitors’ only other effort on target was from Ayoze Perez, whose first-half free-kick was easily held by the Spanish goalkeeper.

The point lifts the visitors up to second in the Premier League table, while Palace move eight points clear of the bottom three.

A step in the right direction for Palace

Having watched his side lose to Aston Villa 48 hours previously, Hodgson may have welcomed the quick turnaround as an opportunity to make amends for that painful defeat.

After Guaita’s penalty save, former Foxes player Jeffrey Schlupp – making his 100th Premier League appearance for Palace – teed up Townsend on the edge of the six-yard box but the winger could only scuff his effort wide.

As has so often been the case this season, it was Zaha who provided the Eagles’ inspiration.

The 28-year-old connected superbly with Townsend’s in-swinging cross to power an unstoppable volley past Kasper Schmeichel for his eighth league goal of the season.

Hodgson will be frustrated at his team’s inability to hold on to their slender lead, but following those heavy defeats against Liverpool and Villa, this was certainly a step in the right direction.

Leicester boss Brendan Rodgers said his team showed the personality of a “huge club” against Manchester United, but he will be disappointed with his team’s profligacy in south-east London.

Jamie Vardy, James Maddison and Youri Tielemans were only named as substitutes, but the visitors created enough opportunities in the first half to establish a comfortable lead.

Iheanacho’s penalty was too close to Guaita, allowing the Spaniard to claw the ball to safety.

Dennis Praet blazed over from a tight angle after Perez’s deflected cross had struck the top of the crossbar, before Iheanacho sent a close-range header off target from the Belgian’s delivery.

The Foxes struggled to carve out meaningful opportunities in the second half until Barnes sidestepped several Palace defenders and drilled low past Guaita for his eighth goal of the season in all competitions.

Leicester could have claimed all three points deep into second-half stoppage time, but Perez’s wayward shot from James Justin’s pass encapsulated a frustrating afternoon for Rodgers and his players.

‘Much happier with the second half’ – what the managers said

Leicester boss Brendan Rodgers, speaking to Match of the Day: “If you get the goal from the penalty, it gives you a foothold in the game but we had good control and then we didn’t start the second half at all well.

“Palace were aggressive and we give away a bad goal from our point of view. But the reaction is what really pleases, some of our play and the speed of our game was really good. We end up frustrated not to win the game.

“You can’t play Jamie Vardy and some of these guys every single minute. Harvey Barnes is developing really well, it’s a great finish, the strike was fantastic. He’s been a real threat for us this season.”

Crystal Palace manager Roy Hodgson, speaking to Match of the Day: “We were much happier with the second half and we got our reward with the goal. Barnes’ strike was a good goal and then the last 10 minutes were tough for us but we saw it through.”

Eagles’ wait for clean sheet goes on – the stats

Crystal Palace welcome Sheffield United to Selhurst Park in their next league game on 2 January (kick-off 15:00 GMT), while Leicester travel to Newcastle a day later (14:15 GMT).