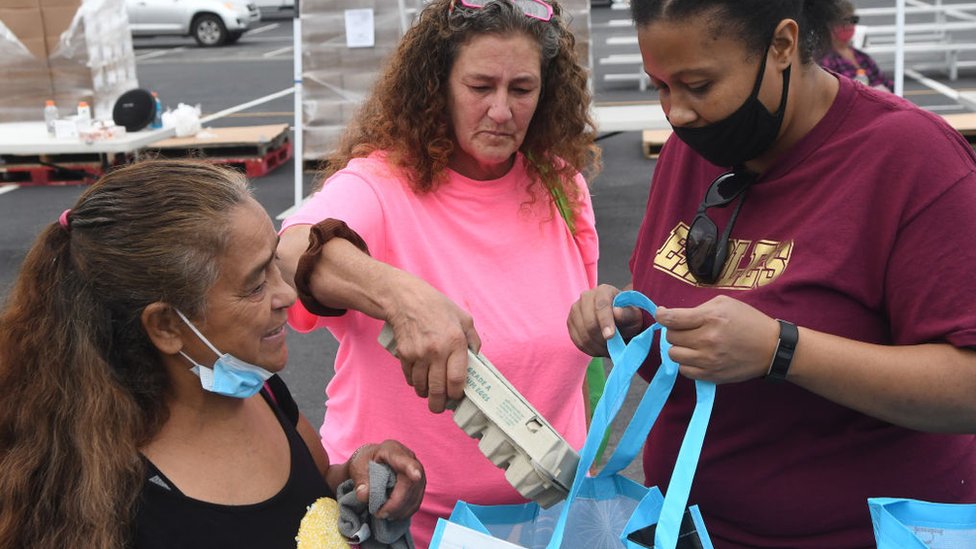 Publishedduration3 hours agoimage copyrightGetty Imagesimage captionThe pandemic has devastated the US economy and caused a surge in unemploymentThe US House of Representatives has voted in favour of increasing the aid sent to individuals under the new coronavirus stimulus package from $600 (£445) to $2,000.The Democratic-led House passed the bill with the support of more than…

The US House of Representatives has voted in favour of increasing the aid sent to individuals under the new coronavirus stimulus package from $600 (£445) to $2,000.

The Democratic-led House passed the bill with the support of more than 40 Republican members.

However, the bigger relief package is likely to struggle in the Republican-led Senate.

In another development on Monday, the House also voted to override President Trump’s veto of a $740bn defence bill that was passed by Congress earlier this month. That bill also now moves to the Senate.

Although Democrats have a narrow majority in the House, Monday’s votes both required two-thirds support to pass.

On boosting the stimulus cheques, Democratic House Speaker Nancy Pelosi said Republicans had a choice – “vote for this legislation, or vote to deny the American people the bigger paycheques that they need”.

But many Republicans were concerned about the financial burden of increased payments.

“For me, I worry that this whopping $463bn won’t do what’s needed – stimulate the economy, or get the jobless back to work,” said senior Republican Representative Kevin Brady.

The House finally voted 275-134 in favour of the higher payments.

But even as he put his name on the bill he called for the stimulus cheques to increase to $2,000, saying he wanted “far less wasteful spending and more money going to the American people”.

Republican and Democratic Party lawmakers had been pleading with him to sign it before a budget deadline of midnight on Monday. If he had not, about 14 million Americans faced a lapse in unemployment benefit payments and new stimulus cheques.

The House vote to override Mr Trump’s veto of the defence bill saw even more Republicans break with the president to see it pass by 322 to 87.

Republican Representative Mac Thornberry said he would “only ask that as members vote, they put the best interests of the country first”.

Mr Trump blocked the legislation despite it gaining strong bipartisan support. He complained it would limit troop withdrawals from Afghanistan and Europe and lead to the removal of Confederate leaders’ names from US military bases.

He called the 4,500-page act, which had been nearly a year in the making, a “gift to China and Russia”.

The Senate will vote on Tuesday and again a majority of two thirds will be required to reverse Mr Trump’s decision.

If Congress does not override Mr Trump’s veto in this case, it would be the first time in 60 years that the National Defense Authorization Act (NDAA) does not become law.