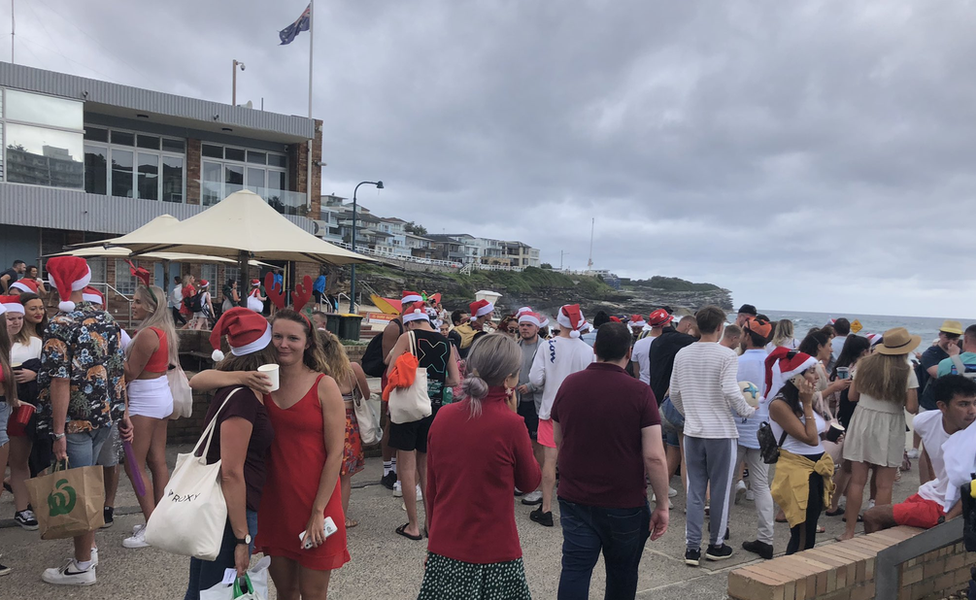 Publishedduration3 hours agoimage copyrightReutersimage captionLocals were shocked to see the partying crowds at Sydney’s Bronte Beach on ChristmasAustralia says it could deport backpackers who flout Covid rules, after hundreds were seen partying at a Sydney beach on Christmas Day.Videos of the gathering shared on social media showed hordes of young revellers singing and dancing at…

Australia says it could deport backpackers who flout Covid rules, after hundreds were seen partying at a Sydney beach on Christmas Day.

Videos of the gathering shared on social media showed hordes of young revellers singing and dancing at Bronte Beach in breach of regulations. Many are believed to be British.

The event sparked anger and officials called it “absolutely appalling”.

Sydney is battling a new outbreak after months of no local cases.

The virus’ re-appearance a week before Christmas sparked a swift re-introduction of restrictions in the city, including clampdowns on holiday gatherings and a lockdown of the worst-affected region, the Northern Beaches.

The outbreak has already grown to 129 cases.

On Tuesday, Australia’s Immigration Minister Alex Hawke said he had been “shocked” by the scenes at Bronte Beach. He issued a warning to other visitors.

“If somebody is threatening public safety or health, their visa can be cancelled and revoked,” he said.

However he did not specify how or if authorities would track down the partygoers – none of whom were fined or otherwise penalised according to New South Wales state police.

What happened at Bronte Beach?

On Christmas Day, hundreds of unmasked backpackers were seen drinking, dancing and singing in the park next to Bronte Beach, which neighbours the famous Bondi Beach in east Sydney.

Holiday parties among backpackers in the tourist hotspot have been a common occurrence in other years.

Witnesses told the BBC they believed the majority were from the UK or “not Australian”.

“You could hear lots of clearly English accents, and several people were wearing the white English football jerseys,” said Peter Hannam, a local journalist who had passed the crowds while on a walk with his family.

“We had to move through them on our path and the crowd was sort of pulsating… and well we thought we don’t really want to hang around here because it doesn’t look very safe.”

He said a police squad and helicopter later arrived at the scene. Video shared on social media showed lingering groups carrying on with their activities as police circulated and tried to disperse people.

NSW Police told the BBC that no penalties were issued to those at the gathering, although one man present was fined at a different gathering later in the day.

“It was an operational decision at the time, there being so many people to deal with,” said NSW Police spokesman Scott Willis. “It’s not always possible to take action against everyone there,” he added.

Police issued fines to other rule breakers on Christmas Day including guests at a house party in Bondi which was over-capacity, and to a woman who drove out of her locked-down suburb for a Christmas visit.

Reports of the gathering have sparked widespread community anger.

Many Australians vented frustrations online, deeming the behaviour “selfish” in contrast to those who endured lockdown restrictions, or were otherwise separated from family over Christmas.

“It is absolutely appalling to see what was clearly a group of people, a large gathering of people, who didn’t give a damn about the rest of Sydney,” he told reporters on Saturday.

Others have also criticised the police response, arguing the party goers had been let off far too easily, especially given how police have dealt with other transgressions.

During a heavily-policed lockdown earlier this year, NSW Police issued A$1,000 fines for violations such as people venturing out of their lockdown zones and lingering in parks. In one case, a man was fined for eating a kebab on a bench – in breach of a stay-at-home order.

Critics say the laws – which are applied with police discretion – have disproportionately affected poorer, marginalised communities.

NSW Police declined to comment on these allegations. Similar criticism was also levelled at Victoria Police during Melbourne’s lengthy lockdown.

Ahead of Sydney’s traditional New Years Eve fireworks celebrations, authorities have banned group gatherings at vantage points around the harbour.

Australia has recorded 909 deaths and about 28,300 cases since the pandemic began – a number far lower than many other developed nations.

Reporting by the BBC’s Frances Mao

Were you on Bronte beach on Christmas day? Or do you live or work in the area? Share your experiences by emailing haveyoursay@bbc.co.uk.