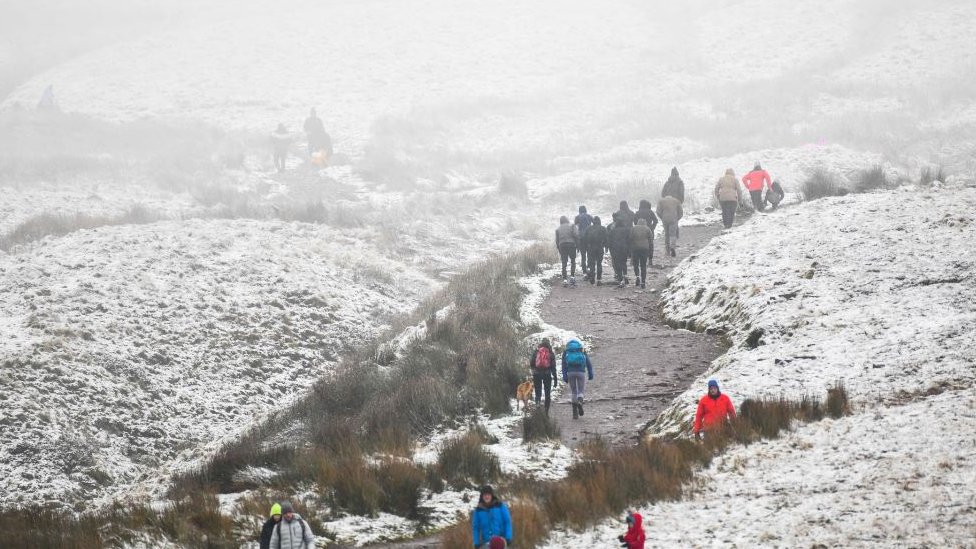 Publishedduration18 minutes agomedia captionCars filled a car park below Pen y FanPolice are turning away visitors to the Brecon Beacons from as far away as London.Wales is on alert level four so people must not travel into or out of the country and can only leave home for essential reasons.On Monday and Tuesday, cars filled…

Police are turning away visitors to the Brecon Beacons from as far away as London.

Wales is on alert level four so people must not travel into or out of the country and can only leave home for essential reasons.

On Monday and Tuesday, cars filled a car park below Pen y Fan, the highest mountain in southern Britain.

An intensive care consultant said the scenes were “very disappointing” as hospitals were under pressure.

Dr David Hepburn said he understands why people want to visit beauty spots but it was against the rules.

He said it was still unclear what impact Christmas had had on case numbers.

“All the hospitals across the health board are now very, very full,” said Dr Hepburn, who works as a consultant in the Royal Gwent Hospital in Newport.

He said while his intensive care unit was coping, he added: “We’ve still got quite a lot of time to go before this pandemic is under control, so really anything could happen over the next month or so.”

Police roadblocks were in place on Tuesday in the Brecon Beacons, with cars lining the A470 to gain access to the area.

Visitors to the national park on Tuesday also included people from London, currently under tier-four restrictions, a group of tourists from tier-three Cheltenham in Gloucestershire, as well as numerous visitors from Swansea, Cardiff and Newport.

Officers from South Wales Police have been turning away visitors and reminding those coming off the mountain of Wales’ lockdown rules, which include the fact that exercise must start and end at home.

Dyfed-Powys Police tweeted that they were “conducting high visibility patrols” in the Brecon Beacons and “officers are engaging and educating and where necessary will enforce restrictions”.

We are currently in Brecon conducting high visibility patrols. A large number of people are visiting the area to walk up Penyfan. This is not essential travel. Officers are engaging and educating and where necessary will enforce restrictions. #StayAtHome pic.twitter.com/G2IOKK27SC

Garry, a dog walker from the local area, said: “If you go into a shop there’s more people in the shop than there is on the mountain today and you’re closer in the shop than what you are here today, so it’s not too bad I don’t think.”

Another walker said: “I think it’s good for your mental health as well.

“Obviously that’s a priority, especially because the first lockdown was horrific. We’re keeping distance between everyone else so I think we’re ok.”

One couple from Pontypridd said: “It’s nice to be able to get out and do something for once. There’s not much else to do at the moment.

“All the pubs and restaurants are closed at the moment, cinemas, so this is about the only real thing we can get out and do really.

“Most people I know are staying quite local, within half-hour, an hour’s drive. No one is really going much further than that.”

Aled Davies, the deputy leader of Powys County Council and the leader of the Welsh Conservatives within the council, said that he was “not angry… just disappointed” to see people seemingly travelling to exercise in the Brecon Beacons.

Mr Davies said: “I can understand why people want to get out into the fresh air” but that “the rules are very, very clear around this.

“It is very clear and very simple and it is disappointing to see so many people travelling up to Pen Y Fan,” he told BBC Radio Wales.

What are the rules about travelling to exercise in Wales?

From 20 December, Wales has been in a nationwide level four lockdown.

Travelling is only allowed for essential purposes, such as for work and for caring responsibilities. International travel is also not allowed.

People are still allowed out of their homes to exercise, for unlimited times and periods each day, but must maintain social distancing, and not exercise with anyone outside their household.

Exercise should start and finish from your home, and the Welsh Government has urged people to avoid activities that involve a “significant degree of risk”, such as water sports and wild swimming.