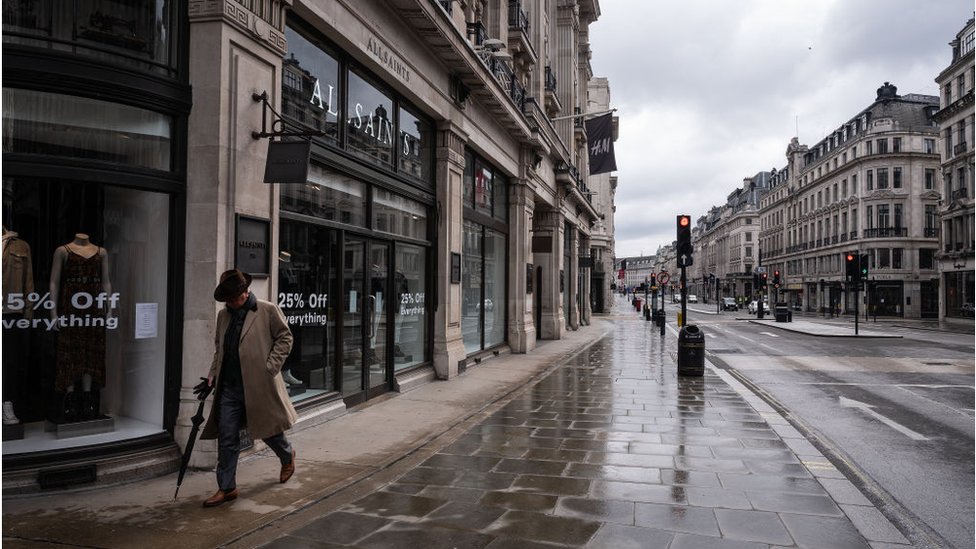 By Tom EspinerBusiness reporter, BBC NewsPublishedduration4 hours agoimage copyrightGetty Imagesimage captionRegent Street in London was deserted at the end of MarchThe impact of the coronavirus pandemic changed people’s lives around the world in 2020.Lockdowns and disruption hit hundreds of thousands of UK jobs, and the government pumped billions into support schemes. The health crisis soon…

The impact of the coronavirus pandemic changed people’s lives around the world in 2020.

Lockdowns and disruption hit hundreds of thousands of UK jobs, and the government pumped billions into support schemes. The health crisis soon went hand-in-hand with an economic one.

Millions of people turned to the BBC News website for up-to-date information as the pandemic unfolded.

Here, we look back at some of the biggest business stories in a year unlike any other.

In January, coronavirus was starting to spread around the world after being detected in China. The UK was monitoring flights arriving from China as a precautionary measure, and there was a warning of an increased likelihood of cases in the UK. The virus was spreading in places such as Italy and Iran.

But the pandemic hadn’t yet taken hold in the UK, and the biggest BBC Business story for January was about US regulators saying Boeing “knowingly” installed faulty parts on 737 Max planes.

Other big stories included Disney cutting “Fox” from its 20th Century Fox brand, which sparked suggestions that the US media giant was trying to distance itself from previous owner Rupert Murdoch, who had supported US President Donald Trump.

Covid-19 infections started to increase in the UK at the end of February, but with only 15 confirmed cases.

As such, Ikea announcing the closure of its Coventry city centre store was the most read story on BBC Business news that month.

Everything changed in March. By this point, coronavirus had spread to every UK nation.

Infections rose, and people started clearing the shelves of some supermarkets as panic-buying took hold. By the end of the month, the UK was in lockdown.

A BBC News article looking at panic buying in supermarkets was the most read piece that month.

The furlough scheme was announced as part of efforts to support the UK economy. The government scheme, which pays up to 80% of furloughed workers’ wages, has since been extended a number of times.

Global stocks also plunged in their worst day since the financial crisis as a row between Russia and Saudi Arabia saw oil prices drop, hitting shares that were already reeling.

Demand for oil all but dried up as lockdowns around the world kept people inside. That led to oil producers actually paying buyers to take the commodity off their hands due to concerns that storage capacity could run out in May.

The UK’s biggest supermarket chain Tesco warned that it couldn’t meet online demand amid the pandemic, despite increasing its online shopping capacity by more than a fifth.

Although panic buying had subsided, Tesco said that most food would still need to be purchased in-store due to the pressure on its website.

The furlough scheme was extended by four months in May as the coronavirus pandemic continued to weigh on the economy.

At that point a quarter of the UK workforce, about 7.5 million people, was covered by the scheme, which was costing £14bn a month.

News other than coronavirus caught many people’s attention, when Tesla boss Elon Musk knocked $14bn (£11bn) off the value of the electric carmaker after tweeting that its share price was too high.

But it was back to Covid for the third most read business story in May, after UK airlines told the BBC that the government would bring in a 14-day quarantine period for travellers arriving in the UK from any country apart from the Republic of Ireland.

Travel restrictions have ebbed and flowed since then.

After falling infection rates the government relaxed some coronavirus restrictions in June as part of an effort to try to boost the economy.

In mid-June shoppers went back to the High Street as some non-essential retailers reopened after the first lockdown.

The third most-read BBC Business story in June was a guide to which shops had reopened.

With infection rates falling, the government announced fresh measures designed to help the UK economy back on its feet.

These included the ‘Eat Out to Help Out’ scheme, which gave diners 50% off to eat in restaurants during August between Mondays and Wednesdays. Chancellor Rishi Sunak also announced a VAT reduction for the struggling hospitality and tourism industries.

Despite government support for the economy, High Street retailers were under pressure as the country headed into a recession. John Lewis and Boots announced 5,300 job cuts after dramatically reduced footfall.

At the beginning of the month Bank of England boss Andrew Bailey backed the government plan to end the furlough scheme in October, saying the government should help workers “move forward” rather than stay in unproductive jobs. The scheme was later extended.

And Prime Minister Boris Johnson warned there was a “long, long way to go” for the UK economy. Between April and June, the number of people in work fell by 220,000, the Office for National Statistics had said.

Outgoing US President Donald Trump consistently refused to publish his tax returns, the first to do so since Richard Nixon in the 1970s.

So a story broken by the New York Times that the billionaire had paid just $750 (£580) in federal income tax both in 2016, the year he ran for the US presidency, and in his first year in the White House, caught readers’ attention.

People were also very interested in a story trailing an update about what the government would do after furlough, which was due to end in October. The story said that more financial help would be announced the following day.

In the event, the government announced an emergency jobs scheme that was less generous than the furlough scheme. However, it then changed tack again in November, and extended the original furlough scheme.

A pub curfew was brought in towards the end of September, which meant that all pubs, bars and restaurants in England were to shut no later than 22:00 each night.

But Labour MP David Lammy warned that the curfew led to people “bubbling out of pubs” and “potentially spreading the virus”.

Walmart had decided to sell its controlling stake in Asda following a failed £7.3bn merger between the chain and Sainsbury’s.

The entertainment industry had been battered by the coronavirus lockdown, but cinemas had hoped for a fresh slate of major new titles to tempt people back.

So delays of big budget releases such as the James Bond film No Time To Die led to cinema chain Cineworld temporarily closing its UK sites. The plan was to reopen in 2021.

The government announced at the beginning of November that it would extend the furlough scheme to the end of March, and postpone its less generous replacement scheme. Furlough was later extended again to the end of April 2021.

Infections had been climbing rapidly in October, contributing to the change of heart from ministers. But opponents said Chancellor Rishi Sunak had waited too long before announcing the extension.

Retail has been one of the hardest-hit sectors of the economy. At the end of November, Sir Philip Green’s Arcadia retail empire, which includes Topshop, Burton and Dorothy Perkins, was on the brink of collapse. A few days later it went into administration, putting 13,000 jobs at risk.

Just as we all started looking forward to putting 2020 behind us, there was yet another piece of bad news: a new variant of coronavirus was spreading rapidly in the south east of England. Not only did this put paid to millions of people’s Christmas plans, but dozens of countries banned UK arrivals. France shut its border with the UK for 48 hours, which led to warnings of “serious disruption” to freight.

Meanwhile the philanthropic MacKenzie Scott revealed that she had donated more than $4bn (£3bn) to food banks and emergency relief funds. The ex-wife of Amazon founder Jeff Bezos said she wanted to help Americans who were struggling because of the pandemic.

And in more retail gloom, last-ditch efforts to rescue Debenhams failed, meaning the department store is set to close with the loss of 12,000 jobs. The last remaining bidder for Debenhams, JD Sports, withdrew, crushing hopes of a rescue.