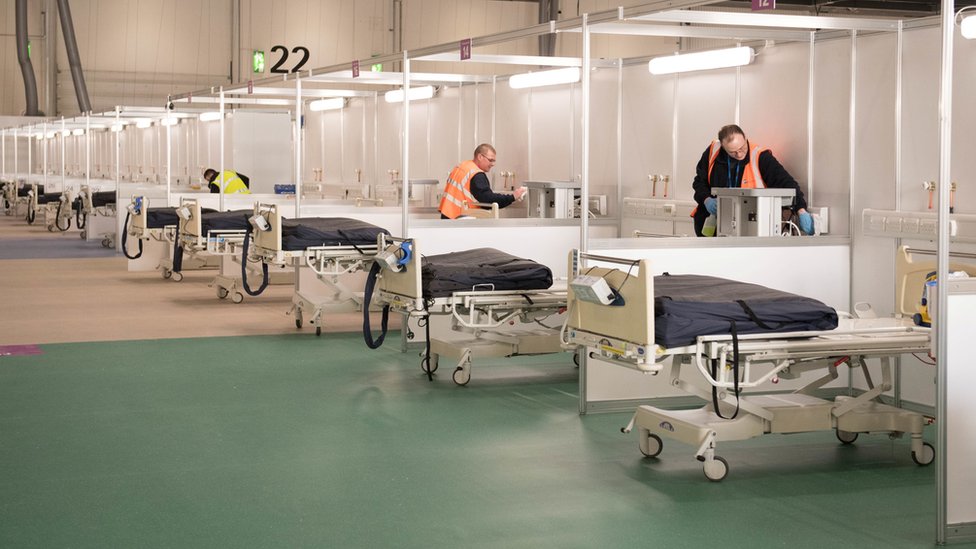 Publishedduration1 hour agoimage copyrightReutersimage captionLondon’s Nightingale hospital was built in nine days, with the help of hundreds of soldiersLondon’s Nightingale hospital remains on standby, despite the removal of some of its equipment, NHS England has said.England’s hospitals are currently treating more Covid-19 patients than during the previous peak of the virus in April.Some equipment, including…

London’s Nightingale hospital remains on standby, despite the removal of some of its equipment, NHS England has said.

England’s hospitals are currently treating more Covid-19 patients than during the previous peak of the virus in April.

Some equipment, including beds and ventilators, are no longer at the ExCel Centre site, it is understood.

NHS England said the facility would be available to support the capital’s hospitals if needed.

It sent a letter to trusts on 23 December asking them to plan for the use of additional facilities such as the Nightingale hospitals.

The ExCel Centre site, which opened on 3 April with space for 4,000 beds to treat Covid-19 patients, was placed on standby in May when fewer than 20 patients were being treated there.

A spokesperson for the NHS said: “The Nightingale in London remains on standby and will be available to support the capital’s hospitals if needed.

“In the meantime it is vital that Londoners do everything possible to reduce transmission and cut the number of new infections which otherwise inevitably result in more avoidable deaths.”

However, concerns have been raised about the already-stretched NHS’s ability to staff Nightingale facilities.

Dr Nick Scriven, the former president of the Society for Acute Medicine, said: “It is not ‘just the case’ of using the Nightingale hospital as there are simply no staff for them to run as they were originally intended.

“They could play a role perhaps if used as rehabilitation units for those recovering but, again, where do we find the specialist staff – the NHS simply does not have the capacity to spare anyone.”

The Labour MP tweeted: “But the reality is years of Tory failures to invest in training and staffing has left NHS short of staff needed.”

Despite the problems, Chris Hopson of NHS Providers, which represents hospital trusts, said it was still the right decision to build the hospitals earlier this year.

Even without complex equipment, they could still have a role given many Covid-19 patients are now treated on general wards with oxygen therapy, he said.

He said the NHS would use “every ounce” of existing capacity it could muster before the Nightingales were used routinely.

The hospital, which was formerly a large exhibition space in London’s Docklands, was planned as part of the UK’s response to the coronavirus pandemic.

There are other Nightingale hospitals in Birmingham, Manchester, Bristol, Exeter, Sunderland and Harrogate.