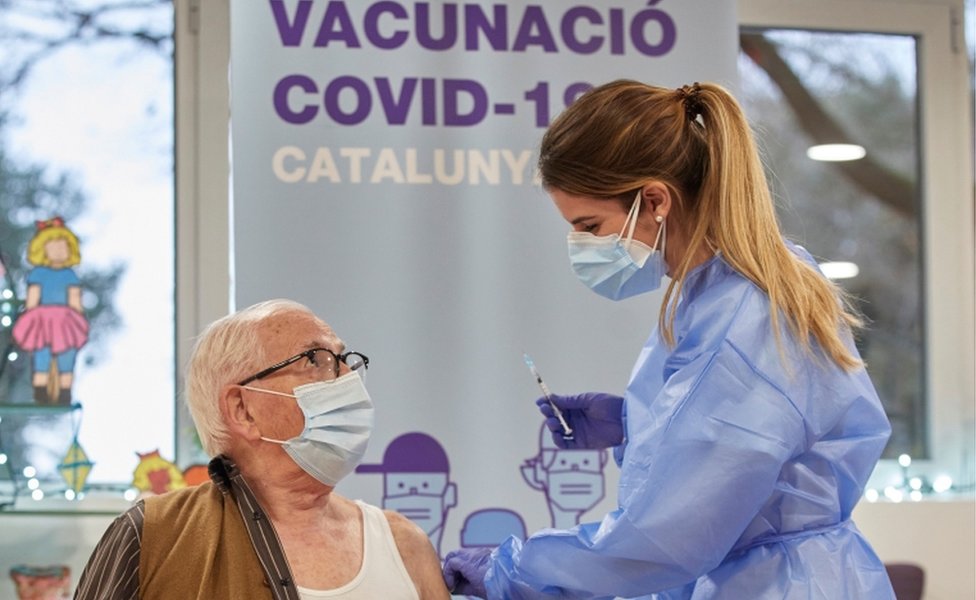 Publishedduration31 minutes agoimage copyrightEPAimage captionThe elderly are among those receiving the first wave of vaccinations in SpainSpain is to set up a registry of people who refuse to be vaccinated against coronavirus and share it with other European Union nations, the health minister has said.Salvador Illa said the list would not be made accessible to…

Spain is to set up a registry of people who refuse to be vaccinated against coronavirus and share it with other European Union nations, the health minister has said.

Salvador Illa said the list would not be made accessible to the public or to employers.

He said the way to defeat the virus was “to vaccinate all of us – the more the better”.

Spain has been one of the countries in Europe worst affected by the virus.

It is currently rolling out the Pfizer-BioNTech vaccine which was approved for EU member states last week.

In an interview with La Sexta television on Monday, Mr Illa emphasised that vaccination would not be mandatory.

“What will be done is a registry, which will be shared with our European partners… of those people who have been offered it and have simply rejected it,” he said.

“It is not a document which will be made public and it will be done with the utmost respect for data protection.”

He added: “People who are offered a therapy that they refuse for any reason, it will be noted in the register… that there is no error in the system, not to have given this person the possibility of being vaccinated.”

According to a recent poll, the number of Spanish citizens who have said they will not take the vaccine has fallen to 28% from 47% in November.

In other comments on Monday, Mr Illa said people would be contacted by regional authorities when it was their turn to be inoculated.

“People who decide not to get vaccinated, which we think is a mistake, are within their rights,” he told reporters. “We are going to try to solve doubts. Getting vaccinated saves lives, it is the way out of this pandemic.”

The number of people who have died from Covid-19 in Spain rose above the 50,000 mark on Monday. The country has registered more than 1.8 million infections during the pandemic.

Spain is under a nationwide curfew, between 23:00 and 06:00, until early May. People are only allowed out in that period to go to work, buy medicine, or to care for elderly people or children.