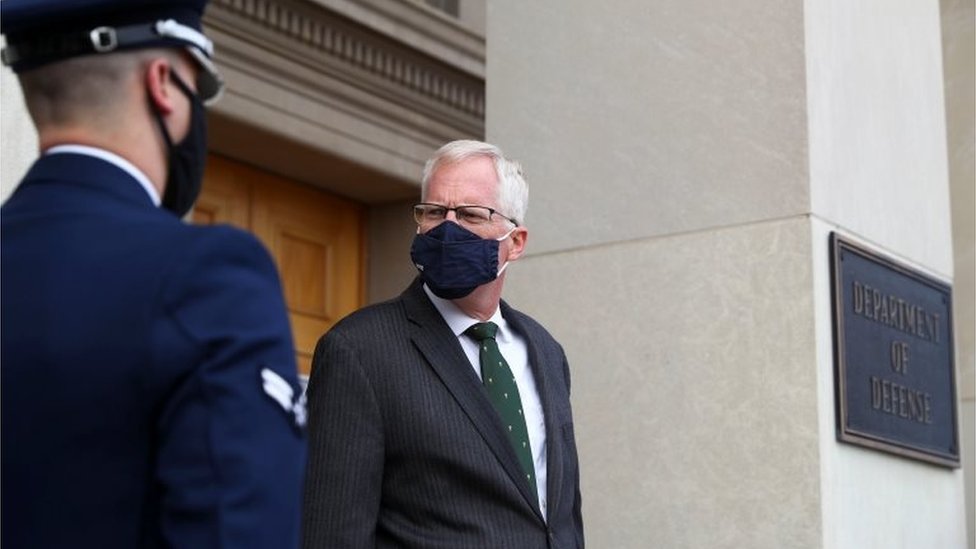 Publishedduration45 minutes agomedia captionPresident-elect Biden accuses the Trump administration of “irresponsibility” over national securityUS President-elect Joe Biden has accused the US defence department of “irresponsibility” for failing to give his team the information it needs for the transition of power.He said his team had encountered “obstruction from the political leadership”.Mr Biden also claimed that agencies…

US President-elect Joe Biden has accused the US defence department of “irresponsibility” for failing to give his team the information it needs for the transition of power.

He said his team had encountered “obstruction from the political leadership”.

A Pentagon spokesman said it had been “completely transparent”.

Mr Biden takes office on 20 January but President Trump has refused to concede.

For weeks after the 3 November election, Mr Biden was blocked from receiving key intelligence briefings, an essential and normally routine part of a presidential transition.

After Mr Trump finally agreed to allow the formal transition process last month, Mr Biden praised the White House for its help in the process.

But his tone had changed on Monday. Mr Biden spoke after a briefing by national security and foreign policy aides.

In a speech which he posted on Twitter, Mr Biden said his team was facing “roadblocks” in the defence department and the Office of Management and Budget.

“Right now, we just aren’t getting all the information that we need from the outgoing administration in key national security areas,” he said.

“It’s nothing short, in my view, of irresponsibility.”

The president-elect added that his team needed a “clear picture of our force posture around the world” and that US adversaries could exploit any confusion that resulted.

“The Department of Defense has conducted 164 interviews with over 400 officials and provided over 5,000 pages of documents – far more than initially requested by Biden’s transition team,” he said.

The presidential transition process is the handover of important information and duties from the outgoing administration to the president-elect and his or her team, ensuring that they are fully up to speed when they reach the White House on 20 January.

The president-elect described key security agencies as having been “hollowed out” in personnel, capacity and morale.

“The policy processes have atrophied or have been sidelined,” he added, saying that this was “to the despair of our alliances”.

Mr Trump sacked his Defence Secretary Mark Esper shortly after the election, apparently over Mr Esper’s disagreement with his call to deploy the military against anti-racism protesters.

Mr Trump’s subsequent installation of loyalists in the department was viewed with concern by political opponents, who saw it as an attempt to sow chaos in the final weeks of his administration.

The president has not commented on Mr Biden’s latest remarks.

Other senior security officials who have left their positions in the Trump administration include Navy Secretary Richard Spencer, fired in November 2019, and John Bolton, who left his job as national security adviser in September 2019. He was the third person to hold that role under Mr Trump.