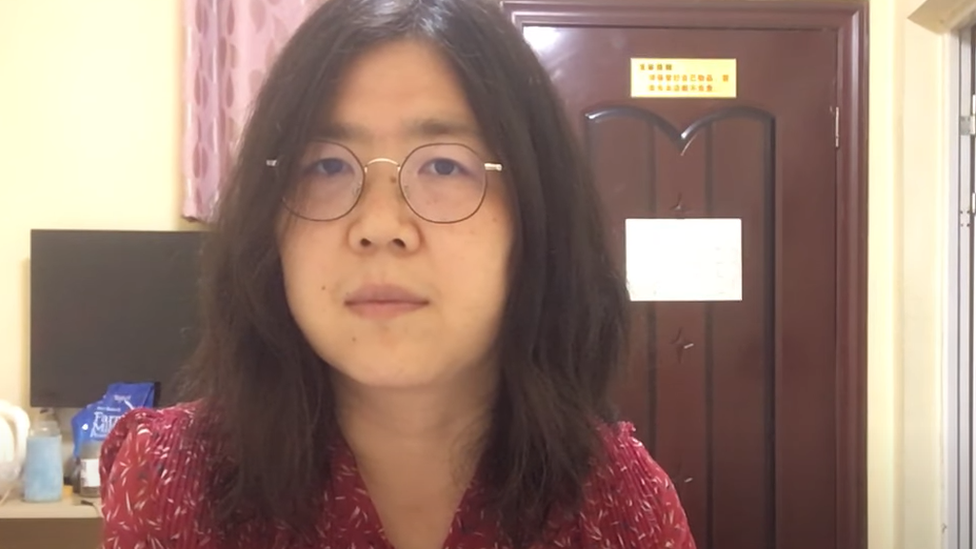 Publishedduration28 minutes agoimage copyrightYoutube/Screenshotimage captionThe former lawyer was detained in MayA Chinese citizen journalist who covered Wuhan’s coronavirus outbreak has been jailed for four years.Zhang Zhan was found guilty of “picking quarrels and provoking trouble”, a frequent charge against activists. The 37-year-old former lawyer was detained in May, and has been on hunger strike for…

A Chinese citizen journalist who covered Wuhan’s coronavirus outbreak has been jailed for four years.

Zhang Zhan was found guilty of “picking quarrels and provoking trouble”, a frequent charge against activists.

The 37-year-old former lawyer was detained in May, and has been on hunger strike for several months. Her lawyers say she is in poor health.

Ms Zhang is one of several citizen journalists who have run into trouble for reporting on Wuhan.

There is no free media in China and authorities are known to clamp down on activists or whistleblowers seen as undermining the government’s response to the outbreak.

Ren Quanniu, one of Zhang Zhan’s lawyers, expressed serious concern for her physical and mental wellbeing, saying she was very weak and on hunger strike. Mr Ren said his client “looked devastated” when her sentence was announced and her mother sobbed loudly.

In a video interview with an independent filmmaker before her arrest, Ms Zhang said she decided to travel to Wuhan in February after reading an online post by a resident about life in the city during the outbreak.

Once there, she began documenting what she saw on the streets and hospitals in livestreams and essays, despite threats by authorities, and her reports were widely shared on social media.

The rights group Network of Chinese Human Rights Defenders said her reports also covered the detention of other independent journalists and the harassment of families of victims who were seeking accountability.

“Maybe I have a rebellious soul… I’m just documenting the truth. Why can’t I show the truth?” she said in a clip of the interview obtained by the BBC.

“I won’t stop what I’m doing because this country can’t go backwards.”

Ms Zhang went missing on 14 May according to the CHRD. One day later, it was revealed she had been detained by police in Shanghai, more than 400 miles (640km) away.

She was formally charged in early November. The indictment sheet alleges she sent “false information through text, video and other media through [platforms like] WeChat, Twitter and YouTube”.

She is also accused of accepting interviews with foreign media outlets and “maliciously spreading” information about the virus in Wuhan. A sentence of four to five years was recommended.

In protest against her arrest, Ms Zhang has gone on a hunger strike and is said to be in very poor health.

Zhang Keke, who is also a lawyer for Ms Zhang, said in a statement that when he visited her in early December she had told him she was being force-fed via a feeding tube. He also said she was suffering from headaches, dizziness and stomach pain.

“Restrained 24 hours a day, she needs assistance going to the bathroom, and she tosses and turns in her sleep,” the lawyer said. “She feels psychologically exhausted, like every day is a torment.”

The lawyer had applied for a postponement of the trial given the state of Ms Zhang’s health.

Ms Zhang had previously been detained in 2019 for voicing support for activists in Hong Kong.

“[Her] sentence is so heavy. The Chinese government is very determined to silence her and intimidate other citizens who tried to expose what happened in Wuhan,” he told the BBC.

“I’m concerned about the fate of other detained citizens who also reported news about the pandemic.”

Li eventually resurfaced, saying he was forcibly quarantined, while Chen is reported to be staying with family but under government supervision. The whereabouts of Fang Bin are still unknown.