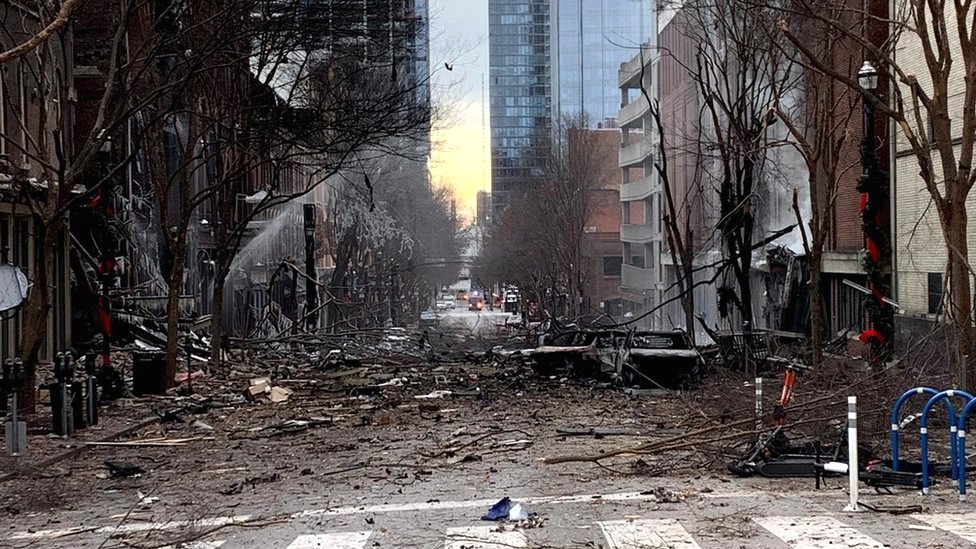 Publishedduration55 minutes agomedia captionWatch the aftermath of the explosion in NashvillePolice investigating a camper van blast that injured three people in Nashville on Christmas Day have named a suspect after DNA was collected at the scene.Anthony Quinn Warner, 63, was present when the explosion occurred in the US state of Tennessee, officials say.They believe the…

Police investigating a camper van blast that injured three people in Nashville on Christmas Day have named a suspect after DNA was collected at the scene.

Anthony Quinn Warner, 63, was present when the explosion occurred in the US state of Tennessee, officials say.

They believe the explosion may have been a suicide bombing and confirmed on Sunday that DNA samples from the site belonged to Mr Warner.

No motive for the powerful explosion has yet been established.

The blast on 25 December disrupted communications systems in Tennessee and four other states.

What are the latest developments?

During a press conference on Sunday, federal investigators said they believed that Mr Warner, who worked in IT and had extensive experience with electronics, was the sole individual responsible for the blast and had died at the site.

They said the blast was probably deliberate, and that it was Mr Warner’s remains discovered at the scene.

According to public records, Mr Warner had until recently lived in Antioch, a suburb of Nashville, where police searched a home on Saturday.

Earlier, CNN reported that DNA samples had also been collected from members of the suspect’s family.

What happened in Nashville?

Officers responded to reports of gunshots just before 06:00 local time (12:00 GMT) on 25 December in an area of the city known for its restaurants and nightlife.

The van exploded a few minutes later, the force of the blast knocking an officer off their feet, police said.

Police have released this image of the van – described by Nashville police as a recreational vehicle (RV) – arriving at the scene early on Friday.

Police emergency systems were knocked out across Tennessee.

Telephone, internet and fibre optic TV services were also disrupted in Tennessee, Mississippi, Kentucky, Alabama and Georgia, according to AT&T.

Resident Buck McCoy said he had been woken up by the blast. He posted a video on Facebook, showing some of the damage done, with alarms howling in the background.