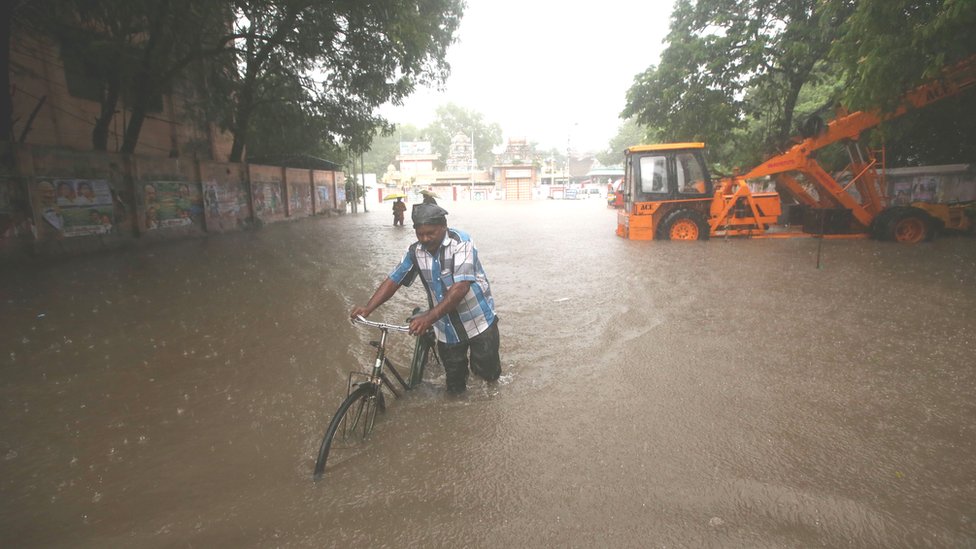 Publishedduration30 minutes agoimage copyrightBABUimage captionFlooding in India this year was linked to a very heavy MonsoonThe world continued to pay a very high price for extreme weather in 2020, according to a report from the charity Christian Aid. Against a backdrop of climate change, its study lists 10 events that saw thousands of lives lost…

The world continued to pay a very high price for extreme weather in 2020, according to a report from the charity Christian Aid.

Against a backdrop of climate change, its study lists 10 events that saw thousands of lives lost and major insurance costs.

Six of the events took place in Asia, with floods in China and India causing damages of more than $40bn.

In the US, record hurricanes and wildfires, caused some $60bn in losses.

While the world has been struggling to get to grips with the coronavirus pandemic, millions of people have also had to cope with the impacts of extreme weather events.

Christian Aid’s list of ten storms, floods and fires all cost at least $1.5bn – with nine of the 10 costing at least $5bn.

An unusually rainy monsoon season was associated with some of the most damaging storms in Asia, where some of the biggest losses were. Over a period of months, heavy flooding in India saw more than 2,000 deaths with millions of people displaced from their homes.

The value of the insured losses is estimated at $10bn.

China suffered even greater financial damage from flooding, running to around $32bn between June and October this year. The loss of life from these events was much smaller than in India.

While these were slow-moving disasters, some events did enormous damage in a short period of time.

Cyclone Amphan struck the Bay of Bengal in May and caused losses estimated at $13bn in just a few days.

“We saw record temperatures in the Arabian Sea and Bay of Bengal, straddling between 30C-33C,” said Dr Roxy Mathew Koll, a climate scientist at the Indian Institute of Tropical Meteorology in Pune.

“These high temperatures had the characteristics of marine heat waves that might have led to the rapid intensification of the pre-monsoon cyclones Amphan and Nisarga,” he said in a comment on the Christian Aid study.

“Amphan was one of the strongest cyclones ever recorded in the Bay of Bengal during the pre-monsoon season.”

Africa was also on the receiving end of extreme events, with massive locust swarms ruining crops and vegetation to the tune of $8.5bn.

The UN has linked these swarms to climate change, with unusually heavy rains in the Middle East and the Horn of Africa in recent years contributing to the locust outbreaks.

Europe also saw significant impacts when Storm Ciara swept through Ireland, the UK and several other countries in February.

It resulted in 14 lives being lost and damages of $2.7bn.

Christian Aid stress that these figures for financial costs are likely an underestimate as they are based only on insured losses.

But financial losses don’t convey the full impact of these storms and fires.

While South Sudan’s floods weren’t among the costliest in dollar terms, they have had a huge impact, killing 138 people and wiping out this year’s crops.

Researchers say that the influence of climate change on extreme events is strong and likely to continue growing.

“Just like 2019 before it, 2020 has been full of disastrous extremes,” said Dr Sarah Perkins-Kirkpatrick, from the Climate Change Research Centre at the University of New South Wales in Australia.

“We have seen all this with a 1C of global average temperature rise, highlighting the sensitive relationship between average conditions and extremes.”

“Ultimately, the impacts of climate change will be felt via the extremes, and not averaged changes.”

“Unfortunately, we can expect more years to look like 2020 – and worse – as global temperatures creep higher.”

While 2021 is likely to bring a similar story of losses from extreme events, there is some sense of optimism that political leaders may be on the brink of taking steps that might help the world avoid the worst excesses of rising temperatures.

“It is vital that 2021 ushers in a new era of activity to turn this climate change tide,” said report author, Dr Kat Kramer, from Christian Aid.

“With President-elect Biden in the White House, social movements across the world calling for urgent action, post-Covid green recovery investment and a crucial UN climate summit hosted by the UK, there is a major opportunity for countries to put us on a path to a safe future.”