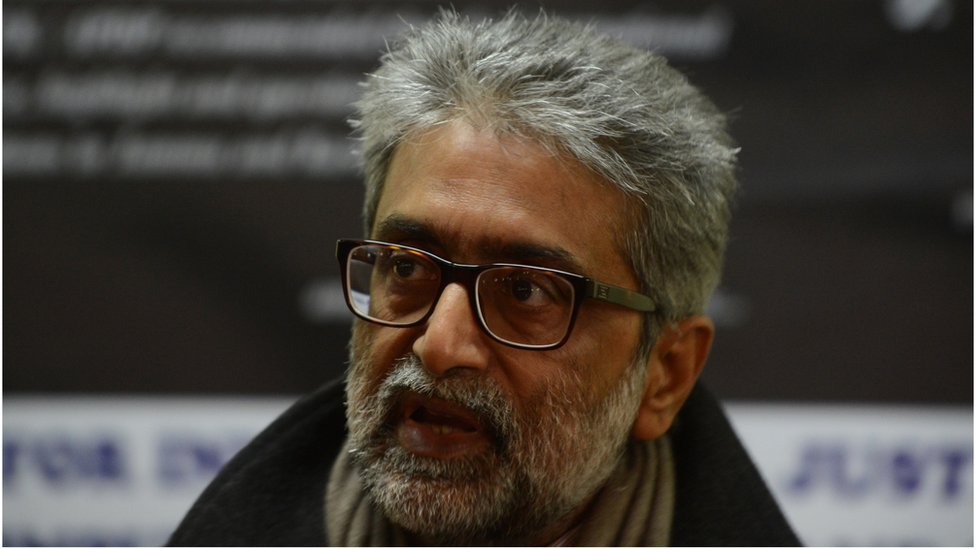 By Geeta PandeyBBC News, DelhiPublishedduration2 hours agoimage copyrightGetty Imagesimage captionGautam Navlakha has been in jail since the middle of AprilLife in prison is expected to be tough. But in recent weeks, jail authorities in India have been called out for being especially cruel to prisoners, particularly the government’s critics who are described as “human rights…

Life in prison is expected to be tough.

But in recent weeks, jail authorities in India have been called out for being especially cruel to prisoners, particularly the government’s critics who are described as “human rights defenders” by international rights groups.

Earlier this month, the Bombay High Court reminded officials of Mumbai’s Taloja jail that they needed to show some “humanity” while dealing with the needs of inmates.

“We need to conduct workshops for jailers. How are such small items denied? These are all human considerations,” Justices SS Shinde and MS Karnik said.

The “small items” here were spectacles that jailed activist Gautam Navlakha had been denied.

His family told the judges that his spectacles were stolen in prison and that when they sent a fresh pair, the authorities refused to accept them.

“He was allowed to call me on 30 November, three days after his glasses were stolen. He’s 68, he needs a high-powered lens and without them, he’s nearly blind,” his partner, Sahba Husain, told me.

Since the start of the pandemic in mid-March, India has stopped all visits by family or lawyers to jail. Inmates are not even allowed to receive parcels.

Ms Husain says Mr Navlakha told her that he had spoken to the jail superintendent and had been assured that he would receive his spectacles.

Ms Husain, who lives in Delhi, quickly got a new pair made and posted them on 3 December.

“I checked three-four days later and realised that the parcel had reached the jail on 5 December, but had been refused and returned.”

It was only after lawyers raised the issue in court, judges read out a lesson in “humanity”, and subsequent outrage on social media that jail authorities provided a new set of spectacles to Mr Navlakha.

A former secretary of the non-governmental organisation People’s Union for Democratic Rights, Mr Navlakha is no ordinary prisoner. He’s spent a lifetime working for civil liberties and is respected globally.

He’s been in jail since the middle of April in connection with what is known as the Bhima Koregaon case.

He’s among 16 activists, poets and lawyers who have been arrested over the past two years on charges of instigating caste violence at a Dalit rally in Bhima Koregaon village in the western state of Maharashtra on 1 January 2018. They all deny the charges against them.

Mr Navlakha is not the only one who has been denied basic items in prison.

Just days earlier, there was outrage in India after reports that Father Stan Swamy, also jailed in connection with the Bhima Koregaon case, was denied a straw and a sipper – a plastic drinking beaker with a spout or straw.

The 83-year-old activist and Jesuit priest suffers from Parkinson’s and his lawyers had told the court that he was unable to hold a cup without spilling because of hand tremors.

Many took to social media to express their disgust and a campaign was launched asking people to send sippers to Taloja jail.

Soon #SippersForStan was trending on Twitter as many posted screen grabs of beakers they had purchased online to send to the prison.

“Let’s flood the jail with straws and sippers,” Mumbai resident Deepak Venkateshan wrote on Facebook. “Let the world know that we are still humane as a nation. Maybe we chose the wrong leaders, but there is still humanity left in us. An 83-year-old man not getting a straw cannot be the nation we live in.”

Three weeks after Mr Swamy’s lawyers went to court, prison officials said that the activist had been given a sipper.

Also last month, 80-year-old Maoist ideologue and activist Varavara Rao was taken to hospital for medical treatment only after the courts intervened.

His lawyer Indira Jaisingh told the Bombay High Court that her client was “bed-ridden, had no medical attendant and his catheter had not been changed for three months”. Accusing the state of negligence, she said she feared that he would die in custody.

In July, Mr Rao had contracted Covid-19 in jail and was taken to hospital only after his family issued a statement and held an emergency press conference seeking help.

“Over the past five-six years, there’s been a spike in the trend of government cracking down on political dissent by imprisoning political activists under draconian laws such as the Unlawful Activities Prevention Act (UAPA) – an anti-terrorism law that makes it almost impossible to get bail,” says MA Rashid, an expert on Indian criminal law and founder of Live Law website.

“Many of them are also charged with sedition and labelled as ‘anti nationals’. Such prisoners, even though they are undertrials, are forced to be confined to pitiable conditions in prisons awaiting trial for years.”

Mr Rashid says prisoners are guaranteed rights under the constitution and denying them medical treatment or such basic facilities as sippers and straws is unheard of in Indian criminal jurisprudence.

“In a landmark judgement in 1979, Supreme Court Justice VR Krishan Iyer said that prisoners too have the right to live with dignity and their fundamental rights cannot be curtailed,” he said.

“Since then, the Supreme Court and other courts have consistently passed judgments upholding human rights of prisoners.”

But those who’ve done time in jail say human rights have no place in Indian prisons.

Safoora Zargar, a pregnant student activist who spent 74 days in Delhi’s Tihar jail in the summer, recently told me that she and other inmates were denied the most basic necessities.

Her arrest in April on charges of instigating riots in Delhi earlier in the year had triggered global outrage. She was freed on bail in June.

“I walked into jail barefoot and with just two sets of clothes. I had a bag with shampoo, soap, toothpaste, toothbrush, etc but I was not allowed to take it in. I also had to leave my shoes outside – they had a bit of heel and I was told that was not allowed either.”

Her detention came at a time when India had just gone into a strict lockdown to stem the spread of Covid-19.

“I couldn’t receive a visitor, parcels or even money. For the first 40 days, I wasn’t even allowed to call home. So I had to beg for every little thing and depend on the kindness of other inmates,” she says.

Ms Zargar, who was three months pregnant at the time of her arrest in April, says fellow prisoners gave her slippers, undergarments and extra blankets.

After she’d been in prison for several weeks, her lawyer petitioned the court so that she could receive five sets of clothes.

Ms Zargar and hundreds of mostly-Muslim student activists have been under arrest since religious riots swept Delhi in February, killing 53 people, most of them Muslims. The accused say they were just participating in protests against a controversial citizenship law and had no role in the riots.

The arrests have been condemned by lawyers, activists and international rights groups.

But those arrested remain in jail, with their bail requests repeatedly denied, and having to turn to the courts to have their basic needs met.

Last month, after seven of the 15 accused activists complained that they were being denied slippers and warm clothes, an exasperated judge threatened prison officials that he would personally visit the jail for an inspection.

“Because we are vocal, jail officials didn’t like us,” Ms Zargar says. “They would come out with new rules every week and use them to torment us.”

And with many Covid-19 restrictions still in place, family members say they can do little, except appeal to the court in emergencies – as Ms Husain had to do to get a set of spectacles to Mr Navlakha.