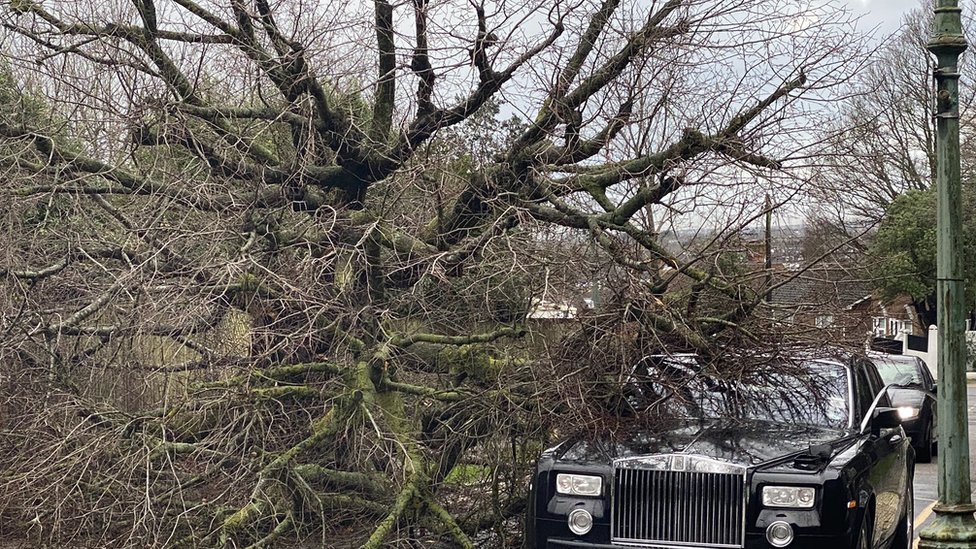 Publishedduration45 minutes agomedia captionStorm Bella: Heavy rain and battering windsGusts of more than 100mph have been recorded as Storm Bella continues to bring heavy rain and high winds to large parts of the UK.The Needles, on the Isle of Wight, saw gusts that reached 106mph (170kmh).The Met Office has also issued yellow warnings for snow…

Gusts of more than 100mph have been recorded as Storm Bella continues to bring heavy rain and high winds to large parts of the UK.

The Met Office has also issued yellow warnings for snow and ice – meaning disruption is likely – for parts of Wales, north-west England, Scotland and the whole of Northern Ireland.

And train operators have reported delays across southern England.

South Western Railway said heavy rain had “flooded the railway” between Bournemouth and Southampton, meaning cancellations and delays are expected all day.

South Western, Southeastern Railway and the London Overground all reported fallen trees and other debris blocking lines and causing disruption in various locations. National Rail advised anyone travelling by train to check their journey before setting off.

Meanwhile, the ports of Dover and Calais warned Channel crossings were also being affected by the weather, with strong winds and poor visibility leading to a “risk of delays”.

And in Wales, Western Power said the storm had caused power cuts to around 21,000 homes, 1,700 of which were yet to be reconnected on Sunday morning.

Sporting events have also experienced disruption, with the Welsh Grand National at Chepstow being called off due to a waterlogged course.

Heavy rain has already caused flooding in Bedfordshire and Northamptonshire over the Christmas period.

Residents in 1,300 homes by the River Great Ouse in Bedfordshire were advised to move out following high water levels on Christmas Day.

Mayor of Bedford Borough Dave Hodgson told BBC Radio 5 Live that around 40 of those homes had gone on to receive flood damage.

He added that water levels in the area were “still high” on Sunday “but seem to be reducing at the moment”.

Severe flood warnings remain in place in Northamptonshire for the River Nene, at Billing Aquadrome – where more than 1,000 people were evacuated on Christmas Day because of flooding – and at Cogenhoe Mill Caravan Site.

A further 88 flood warnings have been issued in England, six in Wales and 12 in Scotland.

Elsewhere, in Cirencester, Gloucestershire, council officials have been providing sandbags for those at risk of flooding due to heavy rain, after more than 70 homes were without power on Christmas Day when an electricity substation flooded.

And up to 40 homes were flooded on Christmas Eve in Witney, Oxfordshire, where the Environment Agency has warned that river levels are still rising.

The Met Office said roads and railways in Scotland – particularly on the western side – were “likely” to be affected by snow and ice until at least 15:00.

It also warned that icy patches on pavements and cycle paths could lead to “an increased likelihood of accidents and injuries”.

Storm Bella is the second period of severe weather to be officially named by the UK’s Met Office this winter.

Communities Secretary Robert Jenrick urged people to check official advice, including from the Environment Agency, which asked people to keep away from “swollen rivers and flooded land”.

A statement on its website said: “It is often deeper than it looks and just 30cm of flowing water is enough to float your car.”

Have you been affected by Storm Bella? If it is safe to do so please share your experiences by emailing haveyoursay@bbc.co.uk.