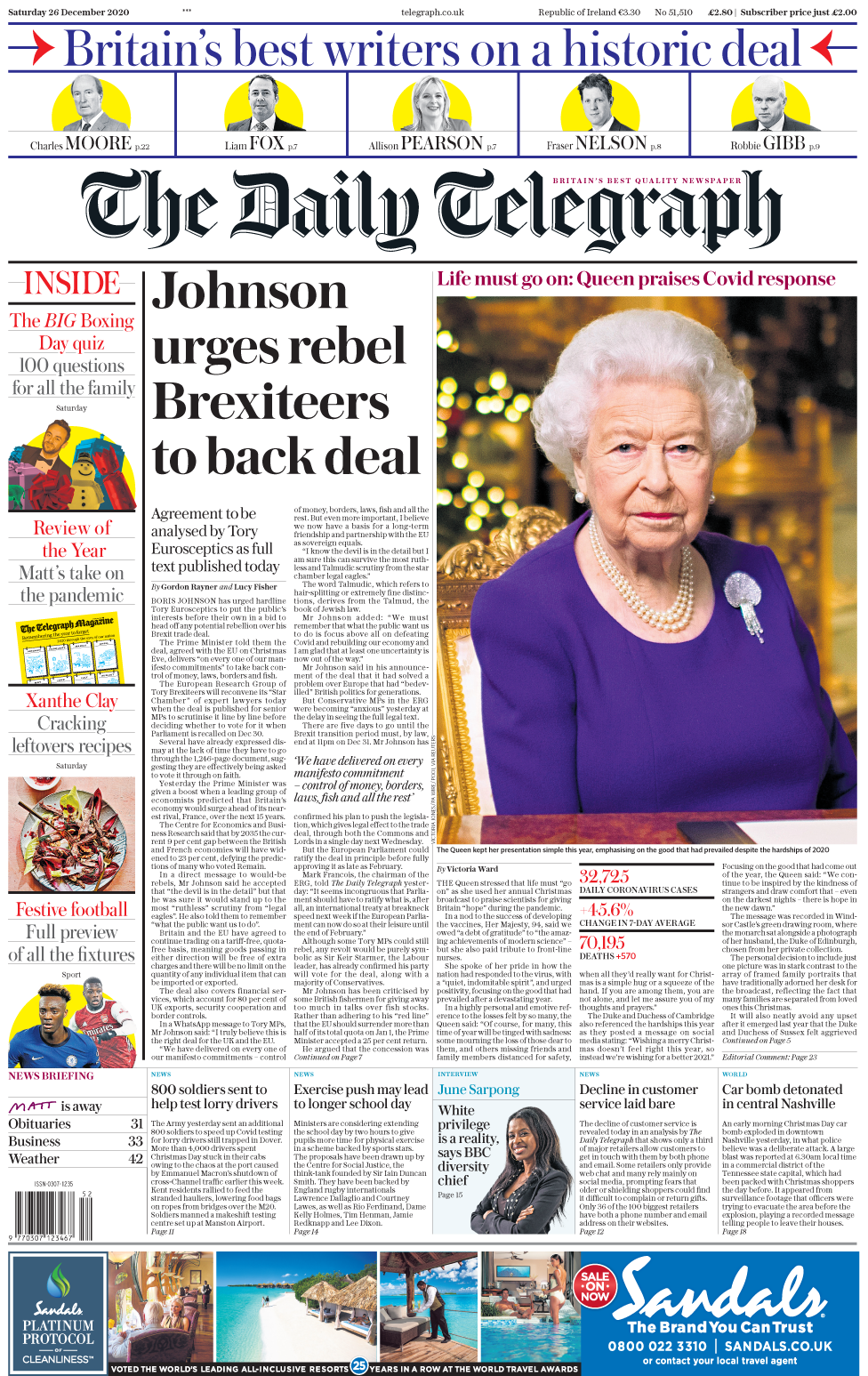 Boris Johnson has appealed directly to Conservative Brexiteers – urging them to put the public interest first as they consider the trade agreement with the EU, says the Daily Telegraph.

In a WhatsApp message to Tory MPs, the prime minister reportedly acknowledges that the “devil is in the detail” – but says he’s confident the deal will stand up to scrutiny. But the Telegraph says several senior MPs have expressed dismay at the lack of time available to go through the 1,246-page document, saying they’re in effect being asked to vote it through on faith.

The paper notes that any revolt would be only symbolic, as the deal has the support of Labour.

The Times leads on Michael Gove’s article for the paper, in which he says the EU trade deal will bring an end to the ugly and rancorous politics of the past few years. Mr Gove admits to making mistakes and misjudgements, causing friendships to crumble.

But he says there are “hopeful signs” that those at the hardest ends of the argument are “beating their polemical swords into ploughshares” and moving politics to a better place.

There’s a strong dose of optimism from the Daily Mail, as it welcomes the EU trade agreement with the headline: “Get ready for blast-off, Britain!”

Experts are quoted saying the economy will “bounce back” in 2021, helped by the agreement. It’s among several paper to cite a study, estimating that by 2035 the UK’s output will be 23% higher than that of France. The Daily Express is similarly buoyant, telling its readers the UK is set to emerge as a leading economic powerhouse.

The papers are full of praise for the Queen’s Christmas speech.

The Sun says she warmed the hearts of Covid-weary Brits, when she said all that many people wanted was a hug or a squeeze of the hand. The paper says the annual broadcast has been hailed by many as the Queen’s strongest.

The Daily Mirror says it was a “message of hope” with “powerful words of comfort”. The Times is especially struck by what it says is her embrace of diversity.

Meanwhile, the Daily Mail reports the Church of England has been plunged into a crisis and is considering sweeping reforms because of losses incurred during lockdown.

Highly-placed sources tell the paper the Church could be facing a shortfall of £150m in donations alone from lockdown, when collection plates went unused and fees for weddings, funerals and christenings dried up.

It’s said to be considering reducing the number of bishops from more than 100 to as few as 10 and redrawing parish boundaries to reduce their number by more than a quarter – possibly resulting in some churches closing.

A Church spokesman tells the Mail it’s too early to calculate the overall losses.