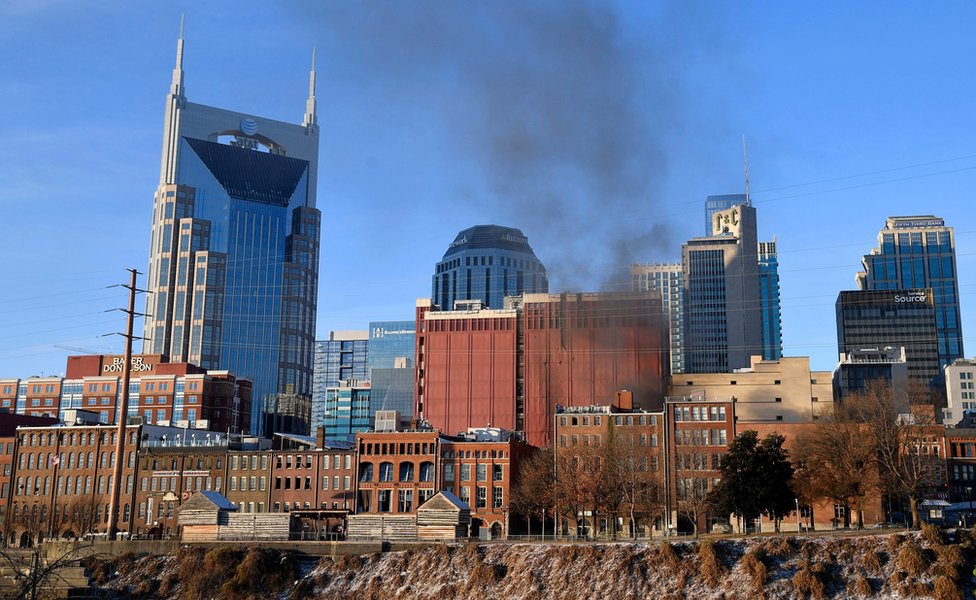 Publishedduration7 minutes agomedia captionWatch the aftermath of the explosion in NashvilleA parked camper van exploded in the US city of Nashville, Tennessee, early on Christmas morning in what police believe to be a deliberate act. Officers arrived at the scene shortly after 06:00 (12:00 GMT) on Friday after reports of gunshots. Police said when they…

A parked camper van exploded in the US city of Nashville, Tennessee, early on Christmas morning in what police believe to be a deliberate act.

Officers arrived at the scene shortly after 06:00 (12:00 GMT) on Friday after reports of gunshots.

Police said when they arrived, the van was broadcasting messages warning it would explode. It blew up a bit later.

Flights out of Nashville Airport were halted temporarily because of a telecoms issue linked to the blast.

The Federal Aviation Administration said service was expected to resume by 15:00 local time.

Three people were injured in the blast, none of them critically, and were taken to hospital, officials said.

It was not clear whether anyone was inside the vehicle at the time of the explosion, police said.

The van blew up outside a building owned by the telecoms firm AT&T, which also occupies an office tower nearby.

When police arrived, a message was playing from the van, warning anyone within earshot to leave the area. Officers began evacuating the buildings before the explosion at about 06:30.

The FBI is leading the investigation. Agents from the Bureau of Alcohol, Tobacco, Firearms and Explosives are also involved.

Investigators have not yet determined who was behind the explosion or what the motive was.

Police took a number of people to the central precinct for questioning but declined to give any details, according to the Associated Press (AP). They have released an image of the vehicle arriving at the scene early on Friday.

Resident Buck McCoy said he was woken up by the blast. He posted a video on Facebook, showing debris and water running down walls, with alarms howling in the background.

Images from the scene showed blown-out windows, damaged buildings and felled trees. The explosion hit an area of Nashville known for its restaurants and nightlife.

“To this point, we do believe that the explosion was an intentional act,” police spokesman Don Aaron told reporters.

CCTV footage posted on YouTube appeared to show the moments before the explosion, when a warning was broadcast, saying, “If you can hear this message, evacuate now”. A loud bang follows and flames and smoke fill the screen.

“It looks like a bomb went off,” Nashville Mayor John Cooper said, urging people to stay away from the area.

In a tweet Tennessee Governor Bill Lee pledged to supply “all of the resources needed” to investigate what happened and who was behind it.

President Donald Trump has been briefed on the matter.