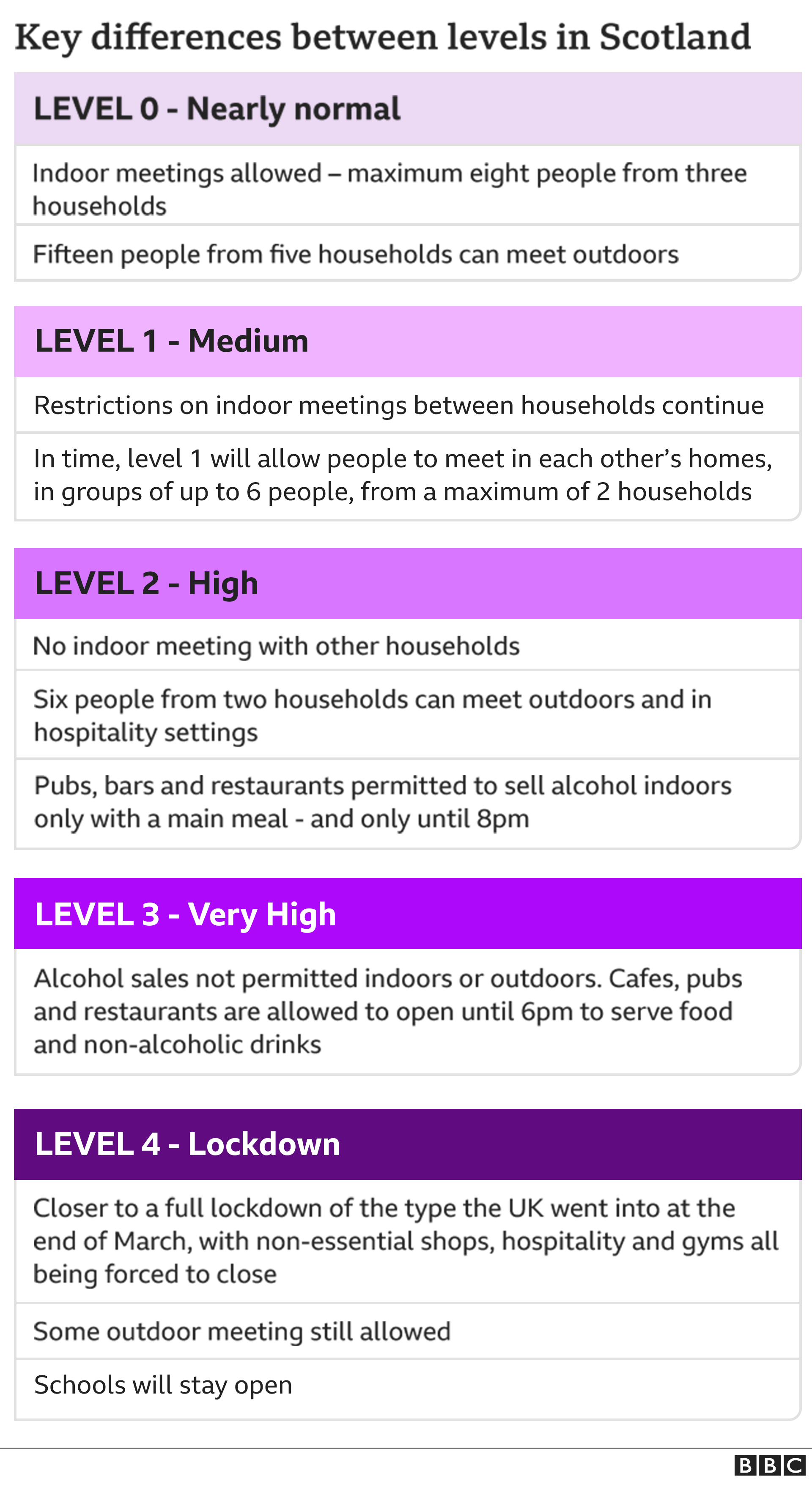 Publishedduration1 hour agoimage copyrightPA Mediaimage captionRestrictions have been increased in Edinburgh and across Scotland to curb the new strain of coronavirusMainland Scotland has moved into the toughest level of coronavirus restrictions.Millions of people are now living under level four curbs – the highest of the country’s five-tier system of anti-virus measures.The change means non-essential retail…

Mainland Scotland has moved into the toughest level of coronavirus restrictions.

Millions of people are now living under level four curbs – the highest of the country’s five-tier system of anti-virus measures.

The change means non-essential retail and hospitality have been closed and additional travel restrictions imposed to curb a new strain of the virus.

The restrictions are due to be reviewed in three weeks.

Those living in Orkney, Shetland and the Western Isles, along with other island communities off the Scottish mainland, are subject to level three measures.

Latest Scottish government figures showed on Saturday that 1,149 new cases of Covid-19 have been reported across the country – 8.2% of all new tests that were carried out.

First Minister Nicola Sturgeon has warned that level four restrictions could be further tightened if efforts to reduce the spread of the new transmissible strain of coronavirus were unsuccessful.

At an emergency briefing last week, Ms Sturgeon said “firm preventative action” was needed after the emergence of the faster-spreading strain, which is currently responsible for more than one in three cases of Covid-19.

It comes as concerns were raised about an outbreak of the new strain in south-west Scotland. Health officials say 64 cases of coronavirus have now been identified in Wigtownshire, with another confirmed in lower Annandale.

For one day only on 25 December, bubbles were formed with other households and travel restrictions were eased.

However all but essential travel is now banned outside your local authority area for the remainder of the festive period.

Figures for deaths, hospital admissions and intensive care cases associated with coronavirus will next be updated on 29 December.

Schools will return later than originally planned after the Christmas holidays.

Ms Sturgeon said they should resume from 11 January, with learning taking place online until at least 18 January.

The new variant was first seen in mid-September in London and Kent – but by December it had become the “dominant variant” in London.

Government advisers believe the new variant could increase the R number – or reproductive rate of the virus – by 0.4 or more.

Nicola Sturgeon said there was no evidence to suggest the new strain made people sicker than earlier variants, or that it would change the effectiveness of the vaccine.

“None of us want this, but these sacrifices will save lives,” he said.

The Scottish Liberal Democrats and the Scottish Greens both backed the moves.