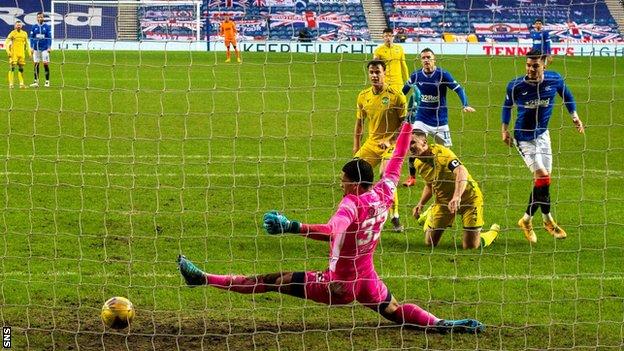 Ianis Hagi sweeps the ball into the net for the winnerRangers’ relentless quest for the Scottish Premiership title carried on with a tight win over Hibernian at Ibrox.Ianis Hagi’s first-half goal opened up a 19-point gap at the summit, which Celtic – who have three games in hand – cut to 16 later in the…

Rangers’ relentless quest for the Scottish Premiership title carried on with a tight win over Hibernian at Ibrox.

Ianis Hagi’s first-half goal opened up a 19-point gap at the summit, which Celtic – who have three games in hand – cut to 16 later in the day.

Hibs hit a post, had a strong penalty shout and threatened late on, but could not stop Rangers’ 12th win in a row.

The Easter Road side, whose last league loss was on 7 November, drop to fourth.

Jack Ross’ Hibernian were the last team to deny Steven Gerrard’s team a Premiership victory in a gripping 2-2 draw in Edinburgh back in September.

And, in truth, the Hibs manager, who was without suspended striker Christian Doidge, will be both proud of and perplexed by his side, who somehow did not come away from Ibrox with a similar result.

While surrendering much of the ball early on, they still had their opportunities.

In the opening moments, Josh Doig’s sweeping cross was dangled at the back post, but Martin Boyle couldn’t convert. And after Hibs went a goal behind, Doig’s devilish delivery kissed the far post with Allan McGregor deceived and beaten.

There were also penalty claims during a late surge. The strongest came on the hour as Hagi’s high boot thwacked away a ball inches from Joe Newell’s head, and Melker Hallberg’s dipping shot from range almost snuck in.

But while this Rangers team has shown its ability to win with a swagger during the season, their durability to get by Motherwell last week, and now Hibs, will please their manager going into a pivotal part of the campaign.

After losing Scott Arfield to injury early on, Connor Goldson’s early effort was cleared by Hibs, before the impressive Hagi dragged a shot just wide from the edge of the box. However, the Romania international was not to be denied.

His decisive strike was grafted from endeavour down the left. Glen Kamara and Joe Aribo combined – the latter showing great strength to hold the ball up – to feed Kemar Roofe. His low cross was scuttled across the box in the direction of Hagi, who beat Paul Hanlon to the ball for a low finish.

Leon Balogun was unfortunate not to add to the hosts’ lead as he was denied by the impressive Dillon Barnes on his first start, but most of the second half was all about Hibs’ pursuit of a leveller.

On the balance of play, it would have been deserved as Rangers offered little to trouble Hibs. But it was a familiar winning feeling for Gerrard and his table toppers, whose 100% domestic record at Ibrox continues this season.

Man of the match – Ianis Hagi

It is not so much what we learned as what we are going to learn in the coming weeks. Make no mistake, this was a huge win for Rangers. It maintained a large gap open over Celtic, with just one match now separating Rangers from a pivotal Old Firm derby against Celtic.

A slip-up here would have offered further encouragement to a resurgent Celtic. Yet, the momentum continues to build.

The narrative has changed slightly. A perfunctory midweek win away to St Johnstone has been bookended by two victories built upon the foundations of fight, character and resilience rather than fluid, flowing play. The next two games will tell us a lot of where the title may end up this season.

For Hibs, the loss of Doidge in attack could well have been a game changer. Newell, Doig and Boyle all impressed, predominantly during a second-half surge, but only one shot made it on to the target.

Rangers manager Steven Gerrard: “Resilience and character are a must. If we want to go the distance it’s not always going to be easy. You know you’re going to have to rely on your big players to stand up and be counted and I thought we did.

“We’re in a much better place than we have been previously when faced with this situation because, recruitment-wise, we’ve got much better players in the door now with all due respect.”

Hibernian head coach Jack Ross: “We are trying to grow and foster a mentality at the club where we are not happy to lose matches, so we are disappointed we have not taken anything from the game.

“But it’s a day for tempering that with pride in large parts of our performance. I thought we were excellent in how hard we made Rangers work for their victory in a stadium where they have been relentless this season.”

Next up for Rangers is a trip to their Scottish League Cup conquerors St Mirren on Wednesday (15:00 GMT), while Hibernian host Ross County (18:00).