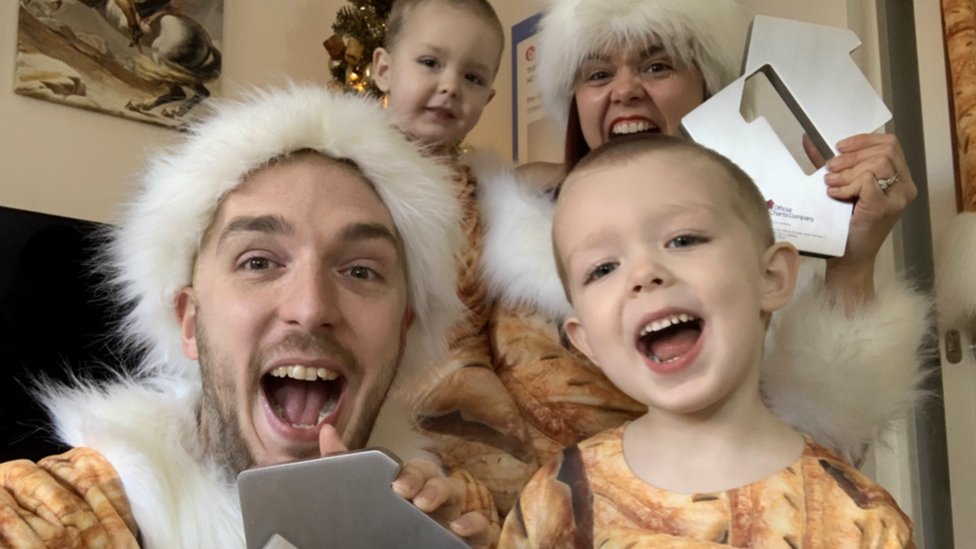 Publishedduration5 hours agoimage copyrightOfficial Charts Companyimage captionOn a roll: LadBaby is again joined by his wife Roxanne and their children on his latest festive hitLadBaby has become only the third act in UK chart history, after The Beatles and the Spice Girls, to score three straight Christmas number one singles.The charitable sausage roll singer fended…

LadBaby has become only the third act in UK chart history, after The Beatles and the Spice Girls, to score three straight Christmas number one singles.

The charitable sausage roll singer fended off competition from a Mariah Carey classic, and a protest song about Prime Minister Boris Johnson.

His latest offering, Don’t Stop Me Eatin’, which is raising money for The Trussell Trust food bank charity, was a pastry take on Journey’s Don’t Stop Believin’.

It followed his previous successful efforts, 2018’s We Built This City… On Sausage Rolls; and I Love Sausage Rolls, from last year.

“We know the British public love a sausage roll,” the hat-trick hero continued.

“And I think after the year we’ve all had we just wanted to come back and make everyone smile.”

His new song, which was helped along by the release of a surprise alternative version with Ronan Keating earlier this week, became the fastest selling UK single in more than three years, since Artists For Grenfell’s Bridge Over Troubled Water.

It also dislodged Carey’s All I Want For Christmas Is You at the summit.

The diva’s ubiquitous hit had reigned supreme for the past fortnight, remarkably for the first time since its release 26 years ago.

LadBaby now finds himself in exalted company, alongside The Beatles, who dominated the Christmas number one spots between 1963-65, with I Want To Hold Your Hand, I Feel Fine, and the double A-side Daytripper / We Can Work It Out.

YouTube comedian LadBaby, whose real name is Mark Hoyle, described 2020 as “our most important year yet” to help people, due to the impact of coronavirus.

“We wanted to choose a song that people love and can sing to,” he continued. “The best way is to look at karaoke songs, and Don’t Stop Believin’ always features highly on most karaoke lists.

“We felt like after the year everyone’s had, it’s a sentiment everyone needs – don’t stop believing things are going to get better. It felt very fitting, so we had to weave some sausage roll magic into the lyrics.”

Elsewhere in the singles chart, an expletive-laden song about PM Boris Johnson, by an Essex synth-pop outfit (whose name we can’t really mention here without losing our jobs) also made the festive top five; and was at one-point the UK’s second most-downloaded song of the week.

Justin Bieber’s cover of Rockin’ Around The Christmas Tree [number eight] and Liam Gallagher’s All You’re Dreaming Of [24], which raised money for Action for Children, also proved popular this year.

McCartney III, the “fun” lockdown album by former Beatle Sir Paul, gave him his first number one LP in 31 years – since 1989’s Flowers In The Dirt.

“I just want to say happy Christmas, happy New Year, and a big thank you to everyone who helped get my record to number one in the album charts,” the rock ‘n’ roll knight of the realm told the Official Charts Company.

Taylor Swift’s surprise new album, Evermore, was close behind him in second.

Also on Christmas Day, it was announced by music licensing company PPL that The Pogues’ widely-debated track, Fairytale Of New York was officially the UK’s most-played Christmas track of the 21st Century.

Last month, Radio 1 decided to stop playing the original version of the song in full, because its audience may be offended by some of the lyrics.

(The track, which features the late Kirsty MacColl, finished sixth in this week’s official singles chart, as one of 26 Christmas songs in the top 40.)

All I Want For Christmas Is You had to settle for second place once again in that poll of the past 20 years, while Wham!’s Last Christmas finished third overall – just as it did in this week’s singles chart too.

You can listen to Radio 1’s Christmas No.1 show, and Radio 2’s 40 Most-Played Christmas Songs of the 21st Century now on BBC Sounds.