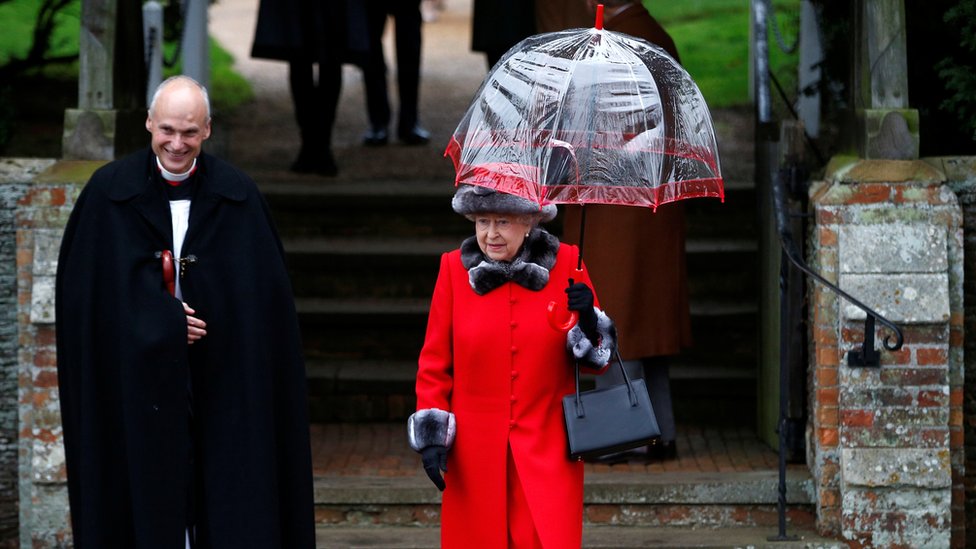 By Mariam IssimdarBBC NewsPublishedduration3 hours agoimage copyrightReutersimage captionThe Queen will not be making her annual trip to Sandringham this ChristmasFor the past 32 years the Queen and other members of the Royal Family have spent Christmas at her estate in Sandringham, Norfolk. But this year, because of the coronavirus, the Queen has chosen instead to…

For the past 32 years the Queen and other members of the Royal Family have spent Christmas at her estate in Sandringham, Norfolk. But this year, because of the coronavirus, the Queen has chosen instead to celebrate “quietly” at Windsor Palace. What will this mean for the Christmas regulars who gather at Sandringham?

Karen Anvil and her daughter Rachel are regular Christmas Day visitors to church in Sandringham.

Ms Anvil shot to fame three years ago after her mobile telephone snap of the ‘Fab Four’ – The Duke and Duchess of Cambridge and Sussex – was bought by agencies and used worldwide. She describes the money she made from it as being “like a lottery win”.

Her good fortune was repeated in 2018 when she took and sold a photo of a pregnant Meghan.

“I would have liked to have gone this year but would probably have just got pictures of them in their face masks,” says Ms Anvil.

But she admits seeing the Royal Family at Sandringham this year would have brought some much needed “normality” to her life.

Ms Anvil works as a nursing auxiliary at Addenbrooke’s Hospital in Cambridge, where her daughter is also employed.

She says they might volunteer to work Christmas Day instead.

Mary Relph, from Shouldham in Norfolk, is one of those Royal fans who gets her Christmas Day started by joining the throngs hoping to catch a glimpse, a wave or a chat with the Queen and members of her family.

She is known to the Queen by her first name, which, for someone who is not an aristocrat, politician or celebrity, is no mean feat.

Mrs Relph has been turning out each year to greet Her Majesty on Christmas morning since 1988.

“Ooh it’s one of the biggest events Norfolk ever has, isn’t it?” she says.

She is disappointed by the cancellation of this year’s gathering, but thinks the Queen has set an example to others by not going to Sandringham.

“I wasn’t expecting them to come, not really, not after all the trouble with the [Covid-19] virus,” says Mrs Relph.

“I think she’s wise. I think we sort of knew with events she wouldn’t come.”

For her Sandringham visits, Mrs Relph is usually accompanied either by a friend from Dereham or with a Glaswegian friend she made one year amongst the crowd.

She says she normally gets her own “spot” from which she can watch and speak to members of the Royal Family.

“I’m one of the chosen few, I think, because I’ve been going for so many years,” she says. “I don’t have to stand and queue at the gates like I used to. It’s wonderful.

“We spoke to Kate last year and we always ask her about the children and what they’re doing.”

‘It makes our Christmas’

Peter Gray, 61, and his wife Stella, 60, live on the Sandringham estate in the hamlet of Babingley.

Turning out to watch the Royals has been part of their Christmas morning routine for the past eight years.

“It just makes our Christmas,” says Mrs Gray. “It’s a good start to the day. We’re up there by 07:00 GMT, take a flask, mince pies, sometimes brandy!”

Her husband Peter is a keen photographer and loves snapping the Royal Family.

He says his relatives in Australia wait for him to post his photos online.

“The rest of the family are going to be disappointed not to get my Royal photos this year,” says Mr Gray.

“We get there and start queuing, start talking to people from all around the world. It’s not just about seeing the royals, it’s about the people from China, Canada, Australia and the US too.

“We stand by the same place each year to ensure a good spot, by the gate, as they come through. They don’t normally talk to you heading into church but they do afterwards.”

Mrs Gray says she has been a royal fan “forever”.

“Prince Andrew has come up and been err, ‘what are you all doing here? You should be at home’. He’s quite abrupt!

“I don’t think he understands why we’re all out there in the freezing cold wanting to look round and see him, but we enjoy it.”

She says things will be “different” this year, and a “bit strange”.

“I suppose there are people for whom the day is their whole lives,” she says. “It’s certainly a big part of our Christmas Day. But we’re realists and it is what it is.

Also wondering how he will fill his Christmas morning is hair salon owner Tom Tokelove, 31, who lives in Dersingham, Norfolk, with his husband Ashley.

The couple and their three poodles have spent the past four Christmases “freezing” outside St Mary Magdalene Church.

“Why? It’s such a magical morning,” says Tom Tokelove. “Everybody is happy.

“Even if you’re not a massive royalist, it brings everyone together and it’s just some way of keeping some sort of tradition.”

The couple start the day with a glass of champagne before walking the 20 minutes to the estate.

“Last year we left at seven in the morning just to make sure we got there in the front of the queue,” he says.

“We really, really wanted to see Kate and Wills. Kate said ‘good morning’ to myself as she glided by, looking very elegant with the children, too.

The Tokeloves usually only stop to watch the Royal Family head into church.

But last year they stayed on and joined in with the carols as the service was broadcast to those outside.

“It will be a much different dog walk this year – obviously there’ll be no Royals about to celebrate with,” says Mr Tokelove.

“[We’ll] probably drink much more champagne in the morning and have a more relaxed day.”