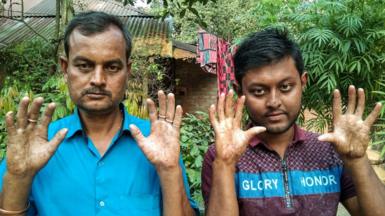 Publishedduration9 hours agomedia captionPhotojournalist Nelly Ating captures images and harrowing stories of those displaced by Boko Haram.Several people are dead in northeast Nigeria after Boko Haram militants raided a mostly Christian village and burnt down a church on Christmas Eve.Local sources said at least 11 people had been killed, according to AFP news.Fighters rode into…

Several people are dead in northeast Nigeria after Boko Haram militants raided a mostly Christian village and burnt down a church on Christmas Eve.

Local sources said at least 11 people had been killed, according to AFP news.

Fighters rode into Pemi, in Borno state, on trucks and motorbikes shooting indiscriminately, a local leader told the news agency.

Pemi is close to Chibok where 200 schoolgirls were kidnapped in 2014.

Boko Haram have carried out a number of attacks in northern Nigeria where they are fighting to overthrow the government and create an Islamic state.

They promote a version of Islam that forbids Muslims from taking part in activity not derived from Islamic tradition. Boko Haram loosely translates to mean “western education is forbidden”. The group’s most infamous attack targeted schoolgirls in Chibok in 2014 and held many captive for years.

On Thursday, fighters stormed Pemi as security officials had warned an attack on the Christian holiday was likely.

Villagers fled into the bush and some are still said to be missing.

The attackers burnt a church, abducted a priest and stole medical supplies from a hospital, before setting it on fire.

The Boko Haram conflict, which has lasted for decades, has killed at least 36,000 people and displaced two million from their homes, according to the United Nations.

To protect themselves, communities in northern Nigeria have resorted to armed vigilantes and militia groups that work alongside the army.

In December, the group claimed responsibility for the abduction of more than 300 schoolboys in Katsina state, although the Nigerian authorities said it was local gangs connected to the Islamist group.