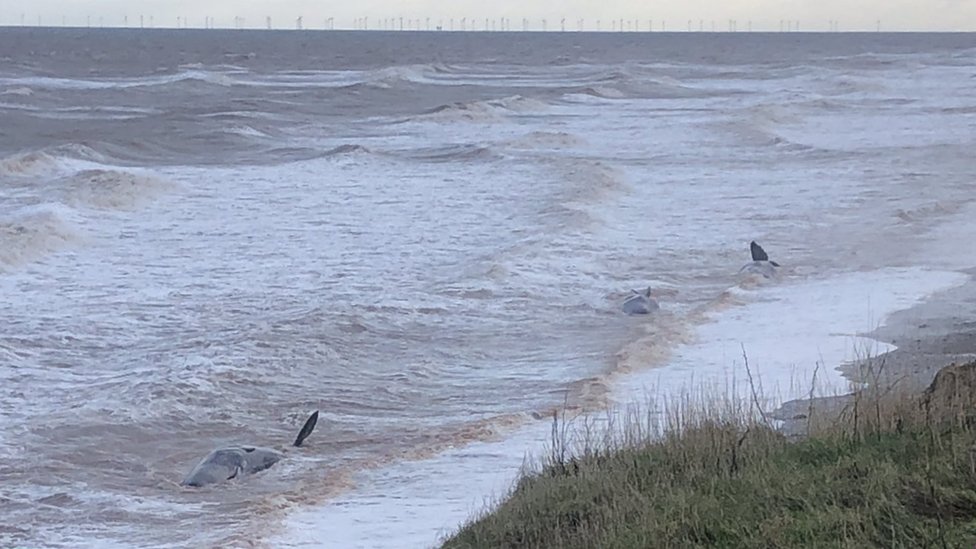 A pod of up to 10 sperm whales has washed up on an East Yorkshire beach.

Members of the coastguard and British Divers Marine Life Rescue (BDMLR) are on the beach, between Tunstall and Withernsea, near Hull.

Four of the whales are still alive but no rescue is under way due to the current weather conditions, a BDMLR spokesperson said.

The pod most likely consists of young whales who have suffered a “navigation error”, the spokesperson added.

The whales are all “in very poor nutritional condition” and due to their size they rarely survive long once on land, the BDMLR confirmed.

A 999 call about the whales was first received from a member of the public at about 08:30 GMT, according to a Maritime and Coastguard Agency spokesman.

Coastguard rescue teams from Withernsea, Hornsea and Easington were subsequently sent to the scene, he added.

A large crowd of people has since gathered nearby, according to Humberside Police.

Ch Supt Darren Downs urged people to stay away from the area “to allow teams from HM Coastguard to manage what is an extremely distressing scene”.

“The Covid-19 pandemic remains a high risk to public health. People should not gather in groups as there is a danger of transmission among the crowds,” he added.

A bitterly cold wind has whipped up the waves at Withernsea and as they sweep over, crash and draw back, they take turns to reveal the body of a whale.

One stranded near the sea wall is drawing a crowd of Christmas Eve prom-strollers. It appears to have already died.

Staff from the Coastguard and British Divers Marine Life Rescue can only monitor the situation and try to keep curious visitors at a distance.

The sea has been too rough to re-float any of these mammals. The tide, not high enough. Hopes of survival have been continually fading.

For those trying to help, it’s been a frustrating and saddening day.

Robin Petch, a marine expert and Sea Watch Foundation ambassador, said: “Sperm whales are a species that shouldn’t come into this part of the North Sea, but a few come down that way.

“They are a deep-water animal that feed on squid and dive in the deep waters of the continental shelf. Often younger males can end up confused in the shallower water off the east coast.

“Once they are ashore, chances of survival are very slim, none of the rescue equipment can deal with whales that big. The loss of a large group, probably of young males, is catastrophic,” Mr Petch added.