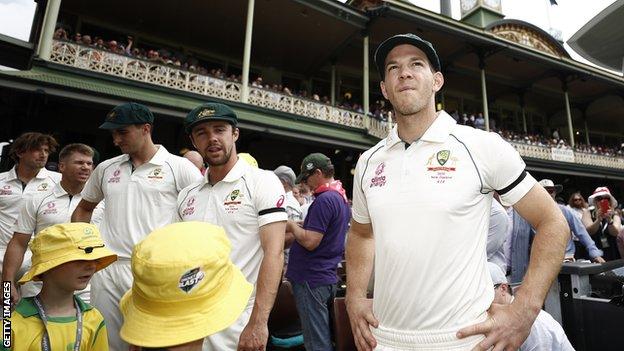 As Tim Paine walked off the field on the first day at Headingley in 2019, the tension was clear. England’s players had huddled to await an umpire’s review that saw Paine lbw to Chris Woakes for 11. He looked back to the huddle and several players turned their heads, their words following the departing Australian captain.

The gist was soon known beyond the boundary: that Paine wasn’t good enough to be playing against them; that he was a clubbie accidentally playing Test cricket. They thought he had fluked a spot when Australia was short of wicketkeepers in November 2017, and fluked the captaincy in March 2018 when three batsmen were banned and he was the most senior option still standing.

It wasn’t only England players advancing this theory. Nor the English press pack, nor the English public. There were plenty in Australia doubting the credentials of someone who, it was agreed, had served well as a stopgap but should go the way that stopgaps go.

Most attention went to Paine’s batting, especially one piece of statistical trivia: that his career had returned a solitary first-class century scored in 2006. Journalists competed for the pithiest descriptions of that span: back in Barack Obama’s first term, back when Paine’s coach was still scoring tons, back when Shakira released Hips Don’t Lie.

All of this underestimated the tenacity and ability of a player who had persisted through seven years of a career derailed by injury, to the point that he was failing in local grade cricket, and had fought back up to the highest level.

Three days after that Headingley dismissal, Ben Stokes floored Australia in a late miracle, and Paine’s same characteristics were evident as the captain who dragged his team off the carpet for an Ashes-sealing win in Manchester.

It was the same tenacity required in Cape Town in 2018, amidst a worldwide furore after his teammates were caught sandpapering a match ball. In the space of a morning, Paine became stand-in captain for the rest of that Test. In a few days he was temporary captain for the final Test in Johannesburg, in a few weeks he was permanent.

Temporary permanent, like some of the scaffolding grandstands at English cricket grounds. Left in place over the winter but only ever a day from being carted away. That’s how Australia’s cricket public saw him. But all the while he was making renovations.

It was Paine who admitted to the team’s problems, something nobody had been willing to do.

“We’ve maybe had our head in the sand”, he said, “that if we continue to win, we can act and behave how we like and the Australian public will be ok with that.” This came the day before his first full Test as captain. “But I think it has got to the stage now where we need to listen to our fans and the Australian public and give them a cricket team that they are proud of, win, lose or draw.”

Talk produced action. Paine made it clear that there was a standard of behaviour and that he would enforce it. Initially, while being pasted by Pakistan or losing at home to India, Paine remained expendable. But as he led for 2-2 in England before whitewashing Pakistan and New Zealand, it became apparent that this is now Paine’s team.

His players gravitate to him on the field and he’s central to their social life. They speak of him glowingly and have produced special performances. They’re aware of how low things went, on the field and off, and seem to believe in the captain as key to a long rehabilitation.

“Tim Paine is the only guy in my eyes who really stood up and could take that challenge on,” said his off-spinner Nathan Lyon earlier this year. “He keeps growing as a leader, he took the captaincy on in the hardest time in Australian cricket and he’s done an amazing job of it.”

None of which means that Paine is a choirboy. He can be lippy or lose his cool, and can have a very caustic edge whether joking or not. When there are celebrations to be had he’s not shy of getting among them.

He’s a canny operator: dealing with him as a journalist, he employs a dash of charisma that hints at friendship, and it’s hard to pick how much is calculated. At other times you can easily see how he makes use of media tendencies.

Take Perth in 2019, when Paine’s wicketkeeping chatter made news for how wholesome it was. Talking to Rishabh Pant about babysitting or to Murali Vijay about Virat Kohli, it was no accident that Paine delivered his lines straight into the stump microphones.

Or at a press conference while being smashed in the Sydney Test, when he answered a journalist’s phone and took a message. He created upbeat coverage to follow.

Scripted or not, it’s better than the uncritical way that Steve Smith ploughed on. Michael Clarke’s era was all about image. Ricky Ponting is lauded as an astute analyst but showed no ability to reflect on his team’s culture while leading it. Paine’s appointment has brought the team reflection and to some extent reconciliation.

As long as he’s at the standard, Paine isn’t handing it over soon. He has hinted at several more years. Another Ashes in Australia must be a lure. During times of criticism, he soldiered on. Now that things have improved he’s enjoying them too much to stop. Aside from as a leader, he remains the best gloveman in the country. Then there’s the question of runs.

Unusually at age 36, that trend is improving. It’s easy to forget that young Paine was more highly rated as a batting talent. He made his Test-best 92 at Mohali in 2010, showing a fine method against spin to counter Harbhajan Singh. He opened in 24 one-dayers, rattling up a century and five fifties.

An erratic career after his injury never let him get confident, always worrying about the next knock and the next operation. But in Tests, Paine’s batting belies stats. His fifties have been the kind that affect results: an unbeaten rear guard in Dubai, an Ashes counter-attack in Adelaide, the partnership with Smith to set up that Manchester bounce back.

His first-class century hoodoo was dealt with straight after the 2019 Ashes. His first hit in Tasmania’s season lasted for over five hours to score 121.

Before the current season, Paine spent more time in the nets than ever before. He arrived well before his teammates for extra hours on his game. More than anything, he concentrated on playing the ball late, softly, waiting and waiting. After a life in cricket he came back to something fundamental.

Another Tasmania century followed, an unbeaten 111, and he was on track for a first Test ton last week in Adelaide before running out of partners while everyone else struggled against the pink ball under lights. His 73 not out saved his teammates from a first-innings deficit in triple figures, and set up the scenario for them to bowl out India for 36 and win the match.

It also bumped his Test average to 33.40, a range that gets scoffed at in a country spoiled by the unique talents of Adam Gilchrist. However, Paine’s raise meant that he now averages second only to Gilchrist among Australian wicketkeepers.

He is also one of six Australian keepers with more than a thousand Test runs, currently on 1,403. Another 25 will take him past Bert Oldfield, with 80 innings to Paine’s 51. From there Paine would trail only Brad Haddin, Rod Marsh, Ian Healy and Gilchrist, each of whom batted over a hundred times.

Paine won’t get that luxury. But put together the aspects of his record, including 147 Test dismissals and counting, and the complaints become a touch churlish. Whatever the path from here, he’s done a sorely needed job in a way that no other contender could have matched. It may have been an accident once, but Paine’s appointment might be the best thing that could have happened to Australia.