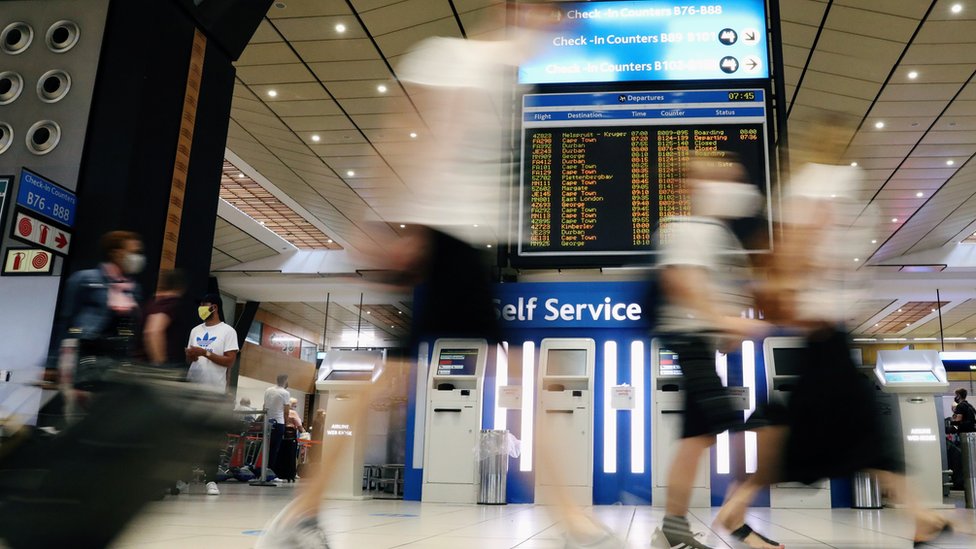 Publishedduration51 minutes agoTravel by visitors to the UK from South Africa is being banned amid concern over a variant of Covid-19 linked to the country.People who have been in or transited through South Africa in the last 10 days will not be allowed into the UK.The new rule from 09:00 GMT will not apply to…

Travel by visitors to the UK from South Africa is being banned amid concern over a variant of Covid-19 linked to the country.

People who have been in or transited through South Africa in the last 10 days will not be allowed into the UK.

The new rule from 09:00 GMT will not apply to British and Irish nationals – but they will have to self-isolate.

The variant was found in London and north-west England, both in contacts of people who had been in South Africa.

The Department for Transport said the ban reflects the “increased risk” from the new variant but will be kept under review.

Anyone required to quarantine will need to do so for 10 days, along with members of their household.

UK visa holders and permanent residents arriving from South Africa will not be affected – but they will also need to self-isolate.

The government had already ordered anyone in the UK who has travelled to South Africa in the past fortnight, and anyone they have been in contact with, to quarantine immediately, along with their households.

The travel ban is coming into effect after the government announced six million more people in England were being moved into the highest tier four restrictions on 26 December.

Any exemptions to quarantine usually in place – including for those related to employment – will not apply, he added.

The variant was detected for the first time in the UK on Tuesday.

Scientists in South Africa say it is still being analysed, but the data are consistent with it spreading more quickly.

It shares some similarities to another new Covid variant that has already been detected in the UK, although they have evolved separately.

Both have a mutation – called N501Y – which is in a crucial part of the virus that it uses to infect the body’s cells.

On Wednesday, a further 39,237 people in the UK tested positive for virus – an all-time high – and there were 744 deaths within 28 days of a positive test, according to government figures.

However, cases were thought to be higher in the UK during the spring peak when testing was much more limited.

Meanwhile, more than 6,000 lorries are still being held in Kent in south-east England, with drivers being tested for Covid-19 before they are allowed to cross the Channel. France had imposed a temporary travel ban earlier in the week over concerns about the new UK variant of Covid-19.