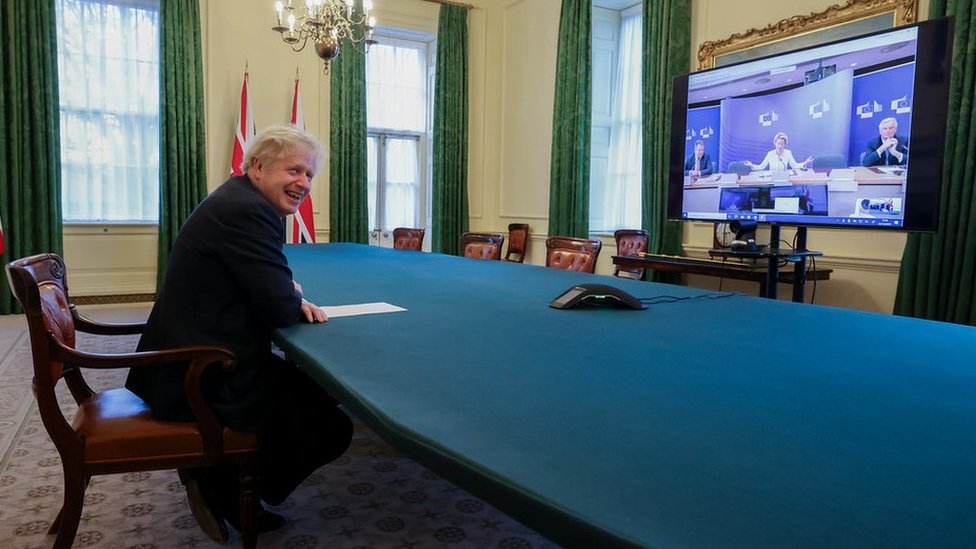 Publishedduration7 minutes agoimage copyrightDowning StreetThe EU and UK have reached a post-Brexit trade deal, ending months of disagreements over fishing rights and future business rules.Downing Street said: “We have got Brexit done and we can now take full advantage of the fantastic opportunities available to us”.Prime Minister Boris Johnson will shortly hold a press conference,…

The EU and UK have reached a post-Brexit trade deal, ending months of disagreements over fishing rights and future business rules.

Downing Street said: “We have got Brexit done and we can now take full advantage of the fantastic opportunities available to us”.

In a press conference in Brussels, the European Commission president said: “This was a long and winding road but we have got a good deal to show for it.

“It is fair, it is a balanced deal, and it is the right and responsible thing to do for both sides.”

She added that now was “time to turn the page and look to the future” and that the UK “remains a trusted partner”.

There will be a five-and-a-half year transition period for the fishing industry, she indicated.

And co-operation will continue on issues including climate change, energy, security and transport.

Mrs von der Leyen said she felt “quiet satisfaction” and “relief” that a deal had been concluded.

“It is time to leave Brexit behind, our future is made in Europe,” she added.

Mr Johnson tweeted a picture of himself smiling with both thumbs lifted in the air.

In its statement, Downing Street said: “Everything that the British public was promised during the 2016 referendum and in the general election last year is delivered by this deal.

“We have taken back control of our money, borders, laws, trade and our fishing waters.”

The UK government had “delivered this great deal for the entire United Kingdom in record time, and under extremely challenging conditions,” the statement added.

The deal will come as a major relief to many British businesses, already reeling from the impact of coronavirus, who feared disruption at the borders when the UK leaves EU trading rules next Thursday.

Down to the wire

The government’s economic watchdog, the Office for Budget Responsibility, had warned that leaving without a deal would have shrunk the national income by 2% next year and led to major job losses.

There were also concerns it would lead to higher prices in the shops for many imported goods.

Negotiations in Brussels went down to the wire over what EU fishing boats are allowed to catch in UK waters. Fishing makes up just 0.12% of the UK’s economy.

There are still big question marks about what the deal will mean for the rest of British business.

Firms that trade with the 27 member states have carried on as normal for the past year during the so-called transition period that kicked in when Britain left the EU.

They will still face extra paperwork when the country leaves the EU single market and customs union next week.

But the threat of tariffs – import taxes – between the UK and its biggest trading partner is likely to be removed.

How will Brexit affect you? Do you have any questions about the trade deal? Get in touch by emailing haveyoursay@bbc.co.uk.