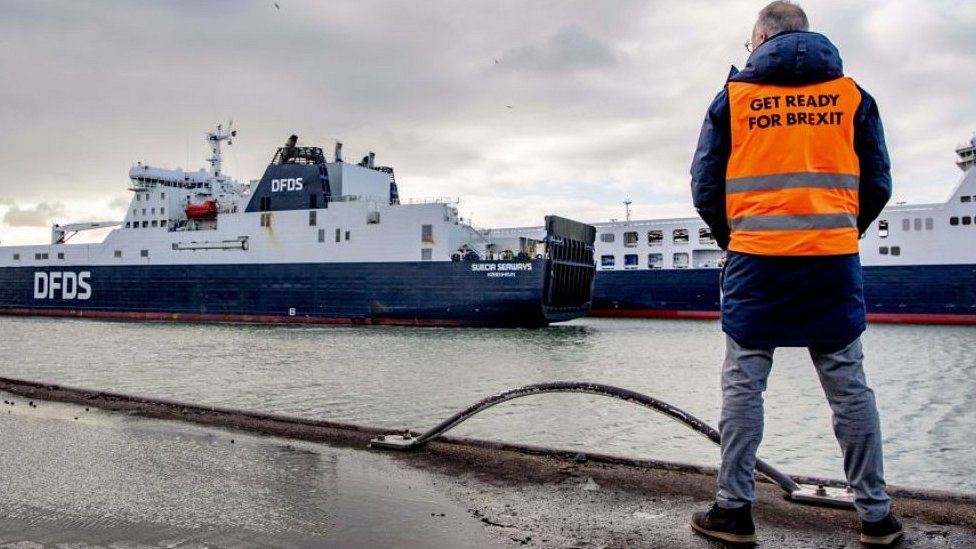 After more than four years of negotiations the UK finally has a post-Brexit free trade deal with the EU.

It avoids leaving the EU’s single market and customs union on 1 January under World Trade Organization (WTO) rules, which would have meant immediate tariffs and quotas.

But UK trade with the EU single market will still involve significant new barriers and costs in the form of extra paperwork and checks. Europeans exporting to the UK have spoken to the BBC about their concerns.

Brexit is of course going to be very challenging as the UK is the biggest retail market we have. We are a boutique business so we have a higher cost because of our premium production, and we don’t want to increase the cost to the UK consumer.

Our family-owned farm is export-oriented and our main markets are the UK, Switzerland, the US and Singapore, so our partners already have to pay customs duties on our extra virgin olive oil.

We are afraid if our product becomes very expensive, maybe the higher prices will influence the situation and people will choose not to have premium olive oil in their diet. However, I want to be very positive and optimistic that the appetite for healthy food will not change in the UK, and let’s hope everything will goes well.

The Brexit negotiations have concerned me a lot because they created an uncertain situation. I’m from a generation that grew up with a dream of Europe and I’m afraid that maybe new retailers won’t be so willing to buy products from the continent because of the new situation.

We represent 98% or 99% of Dutch growers and almost 75% of our export volume from the Netherlands to the UK is cut flowers. What will change from January is that there’ll be a new situation that will lead to extra costs in the supply chain and extra time.

Of course we need to deal with it – we don’t have a choice. But we hope and expect, based on the relationship we have built up with the UK, that the flower trade will continue, although of course it will be in a much more complicated way. We expect the UK will keep buying flowers and loving flowers, but there will be changes.

There are additional costs for documentation for export and import. On the UK side certificates are necessary for January and there will be inspections on both sides. There could be other hidden costs as well. We made an impact analysis on import duties, operational fees, documentation and phytosanitary (plant health) certificates – but also the financial impact and the fall in disposable income.

We are very strong on lilies and chrysanthemums for the UK. Because of the extra costs there might be an impact on the demand for cut flowers, so for that reason the growers need to find new markets.

Yes, the growers are worried; they have lots of questions. Are we prepared? We are as well-prepared as we can be. In January it’ll be the proof of the pudding and hopefully it’ll become clearer when the inspections are handled in practice.

Ireland sends about half its beef to the UK, and the same would apply for mine. I sell around 100 cattle during the year. Since the UK voted to leave [the EU] it pulled the price down €100 [£90] a head, and we haven’t got it back since then.

There’ll be a significant cost to the UK decision to exit – for farmers in Britain, and here, probably across all sectors of the economy.

My sheep are slaughtered at Kildare Chilling, mainly for the French market. Sheep has been good: €0.60 to 0.70 a kilo up on last year. Access to Europe is a huge issue for us – it’s also an issue for British farmers sending lamb.

Mine is a medium-size family farm in Ballinakill, 150 hectares [0.58 sq miles] – I do everything myself, with just a bit of help.

Any disruption affects us – we want to see as near to what we have today, in Northern Ireland and across the sea. You won’t get a better product anywhere in the world. It’s cheaper here, on the [UK’s] doorstep. And it’s a no-brainer environmentally – in South America there are huge considerations about animal welfare and labourers’ conditions. Consumers want beef produced to our standards.

At Tropical Millenium we grow avocados, mangoes and papayas, which we market across Europe. We only sell avocados to the UK – it’s about 8% of our total volume, around 1,500 tonnes, from mid-December to April.

Those avocado sales are mainly to Sainsbury’s – we make €3m (£2.7m) a year from that business.

We’ve already begun the season, and I’ve heard it will be complicated after 1 January. But we have someone to handle the exports to the UK, we’ve prepared paperwork. We’re ready to use our historical service provider to do that – we have a close relationship with a customs agent.

We want to keep our relationship with Sainsbury’s, as our production is ecological and sustainable, it means they are not shipping avocados from South America. We want to do that, though we could make up the difference with other customers.

We deliver around 50 trucks every day into the UK. Are customs services ready to make a big change on 1 January? Because if they’re not able to cope with those changes, we’ll have a very disrupted supply line.

We have frozen goods, so if there are a couple of days’ disruption that’s not problematic. But internal warehousing is very limited in the UK, so you can’t just say ‘let’s not travel for a week’. You can skip one day but not more, as you’ll have empty shelves in the shops.

What’s most worrying is that it’ll disturb all the transport flows in both directions because companies don’t have enough time to prepare any more. There are still some items that are also new for customs.

The question [if there is a cost increase] will be whether the supermarkets pass it on. It is a worry and in the end nobody benefits from this, the consumer, producer or the supermarket.

We were actually doing all the currants that Tesco sold in their supermarkets – every packet was made by us: mixed fruit and sultanas. But that all stopped 10 years ago.

For two reasons we decided slowly but steadily to diversify.

When we joined the euro (in 2001) we thought, correctly as it turned out, it would be difficult to sell commodities, as there were other countries, like Turkey, with a weaker currency. The other reason was when the UK decided to go for Brexit we were afraid some duties would be put on our products as members of the EU. Brexit was for us the last straw.

To be sincere, we haven’t been following the Brexit talks so much. Although we really like doing business with the UK, for the moment we stopped for those reasons. We are using our material to make better, branded products, with a better pricing structure, such as balsamic vinegar and other salad dressings.

We are the number one producer in Greece and sell to another 20 countries. Our best clients are the Czech Republic and Finland. I have to admit the decision was right for so many reasons.