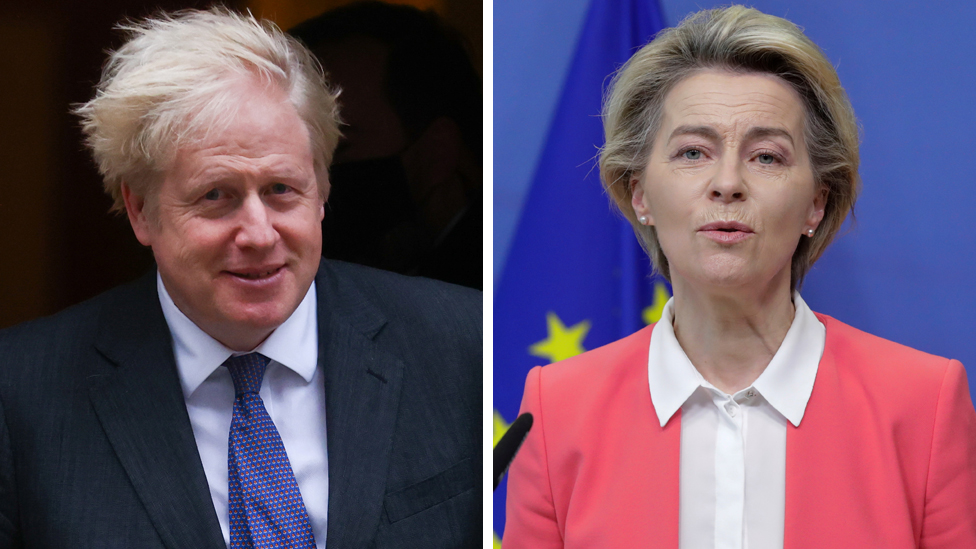 Publishedduration38 minutes agoimage copyrightReutersimage captionBoris Johnson and Ursula von der Leyen are said to have been working to reach an agreement before ChristmasBoris Johnson is shortly expected to announce the UK has reached an agreement with the EU over post-Brexit trade and security.Officials in Brussels are believed to be finalising the details of a deal…

Boris Johnson is shortly expected to announce the UK has reached an agreement with the EU over post-Brexit trade and security.

Officials in Brussels are believed to be finalising the details of a deal that will come into force when the UK leaves EU trading rules next week.

It follows months of often fraught negotiations between the two sides.

The PM will speak to European Commission President Ursula von der Leyen by phone to sign off the deal.

Mr Johnson is then expected to hold a press conference in Downing Street to announce it.

The announcement had been expected earlier, but it has been delayed while final haggling between the two sides continues.

Irish foreign minister Simon Coveney told RTE Radio there had been “some sort of last-minute hitch” over the small print of the fishing quotas agreement but a deal was still expected later.

A deal would end the prospect of the two sides imposing widespread import taxes – tariffs – on each other’s goods from 1 January, which could have affected prices.

She said negotiators were “still haggling over some fine details”, including catch quotas for more than 100 species of fish in UK waters.

It is understood the agreement does not have a role for the European Court of Justice, the EU’s top court, and the two sides have agreed a system to sort out disputes that follows international law, rather than EU law, our political editor said.

In addition, she said the two sides have agreed to phase new fishing arrangements over five years, with the UK catching as much as two-thirds of the fish in UK waters by the end of the transition.

The deal document is thought to be around 2,000 pages long. It is expected that the UK Parliament will be recalled to vote on a law implementing a deal before 31 December, when the Brexit transition period ends.

On the EU side, leaders can decide to apply a deal provisionally before the European Parliament holds a ratification vote early next year. It could also need eventual approval in national EU parliaments, depending on the exact contents of the deal.

It is believed one of the final obstacles being discussed include quotas for particular types of fish.

The UK has insisted on having control over fishing in its waters from 1 January and retaining a larger share of the catch from them than under the current quota system.

But the EU wanted to phase in a new fishing system over a longer period and retain more of its access to UK waters for boats from France, Spain and other member states.

The sides also disagreed over whether UK firms should continue to follow the same rules as companies within the EU – and on how future trading disputes should be resolved.

As afternoon gave way to evening and evening gave way to night in Brussels optimism that agreement was close never dwindled, but never quite turned into a deal either.

At one point pizzas arrived for the weary officials – a delivery man on a bike turning up at the front gates of the European Commission.

It was understood that negotiators were still haggling over precise quotas of individual species of fish that EU boats will be allowed to catch in British waters.

The governments of individual EU member states must consider the details of any deal but they have been briefed regularly throughout the process and shouldn’t find much if anything to surprise them.

The issue of how to promote the deal for public consumption is much more pressing for the British side than the European.

For the EU there are legal loose ends to be tied up but the European Parliament will only vote on a deal retrospectively at some point in the New Year.

In the UK the government will have to get any deal through parliament before 31 December.

UK ministers have repeatedly ruled out any extension to the transition period, under which the UK has continued to follow Brussels’s trade rules since it left the EU on 31 January.

Sir Ian Cheshire, chairman of Barclays UK, said he welcomed an agreement, which would bring “clarity” for business.

Speaking on BBC Radio 4’s Today programme, he said planning for a new trading relationship with the EU had been “the overriding issue for businesses over the last two years”.

“This was pure politics. It was always the last minute sort of rabbit from the hat,” he added.

The European Research Group of Brexit-supporting Conservative MPs has promised to reconvene its group of lawyers to analyse any deal that is reached.

The group was highly critical of previous Prime Minister Theresa May’s withdrawal agreement with the EU.

Chairman Mark Francois and deputy chairman David Jones said it would “scrutinise it in detail, to ensure that its provisions genuinely protect the sovereignty of the United Kingdom”.