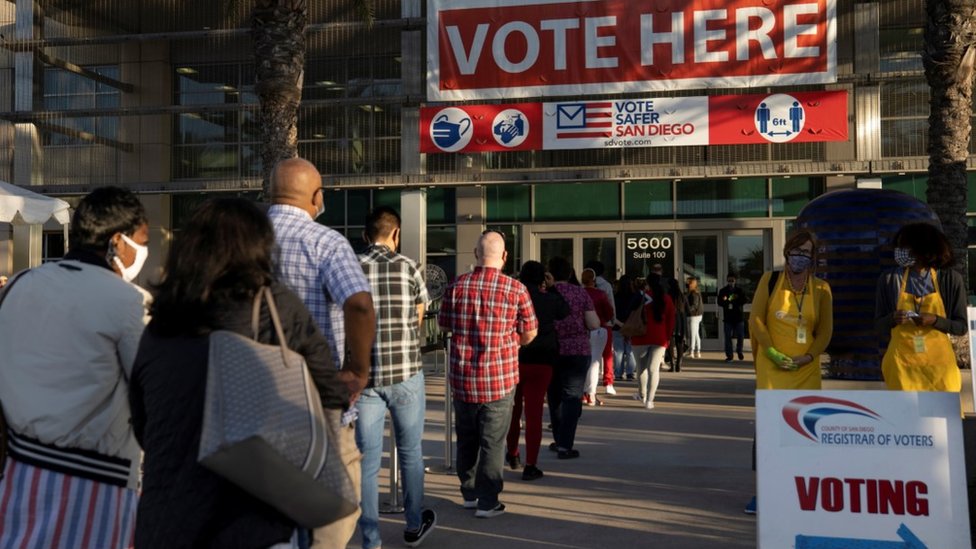 US TV networks Fox News and Newsmax have aired segments highlighting the lack of evidence linking electronic voting machines to fraud in the US election.

The networks had received legal threats from Smartmatic, a voting technology company targeted by fraud allegations.

President Donald Trump’s team have used unfounded claims about voting machines in a bid to overturn his defeat.

Members of his team appeared repeatedly on the channels to push the theory.

Fox News ran a two-minute fact-check in the form of questions and answers on three different programmes on Saturday which denied allegations of manipulation or fraud by the two companies.

Newsmax published an online piece and aired a segment on “facts about Dominion, Smartmatic you should know”.

“The demand letters identify dozens of factually inaccurate statements made by each of the organisations as part of a ‘disinformation campaign’ to injure Smartmatic and discredit the 2020 US election,” read a statement on the company’s website.

President Trump, his legal team and a number of his allies have made various allegations in recent weeks about widespread electronic voting fraud in several swing states involving Dominion – which sells electronic voting software and hardware – and Smartmatic.

Did you know a foreign company,DOMINION,was counting our vote in Michigan, Arizona and Georgia and other states.

But it was a front for SMARTMATIC, who was really doing the computing.

Look up SMARTMATIC and tweet me what you think?

It will all come out.

The unfounded allegations – some of which have been widely covered by the three networks – include claims that Dominion systems enable “computerised ballot-stuffing”, millions of votes for Mr Trump were either deleted or flipped in favour of Joe Biden, voting machines are part of a plot originating under former Venezuelan leader Hugo Chavez or were accessed by foreign agents to manipulate results, and that Dominion used Smartmatic software in a number of states.

No evidence has been provided for any of the allegations and dozens of federal courts have dismissed lawsuits which referred to those claims.

In it, Mr Perez confirms there is no evidence Smartmatic software has been used to “delete, change [or] alter anything related to vote tabulation”, adding Smartmatic and Dominion are independent companies and “not related to each other”.

And on Monday, Newsmax host John Tabacco read out in full the statement published on the network’s website two days earlier.

“Newsmax would like to clarify its news coverage and note it has not reported as true certain claims made about these companies,” he said.

“No evidence has been offered that Dominion or Smartmatic used software or reprogrammed software that manipulated votes in the 2020 election,” Mr Tabacco added.

According to the New York Times, Dominion has also hired a lawyer who has threatened legal action against the Trump campaign and Sidney Powell, a former member of the Trump legal team who has made dramatic claims of fraud in several public events and filed unsuccessful lawsuits in a number of swing states.

One America News did not immediately respond to a BBC request for comment.