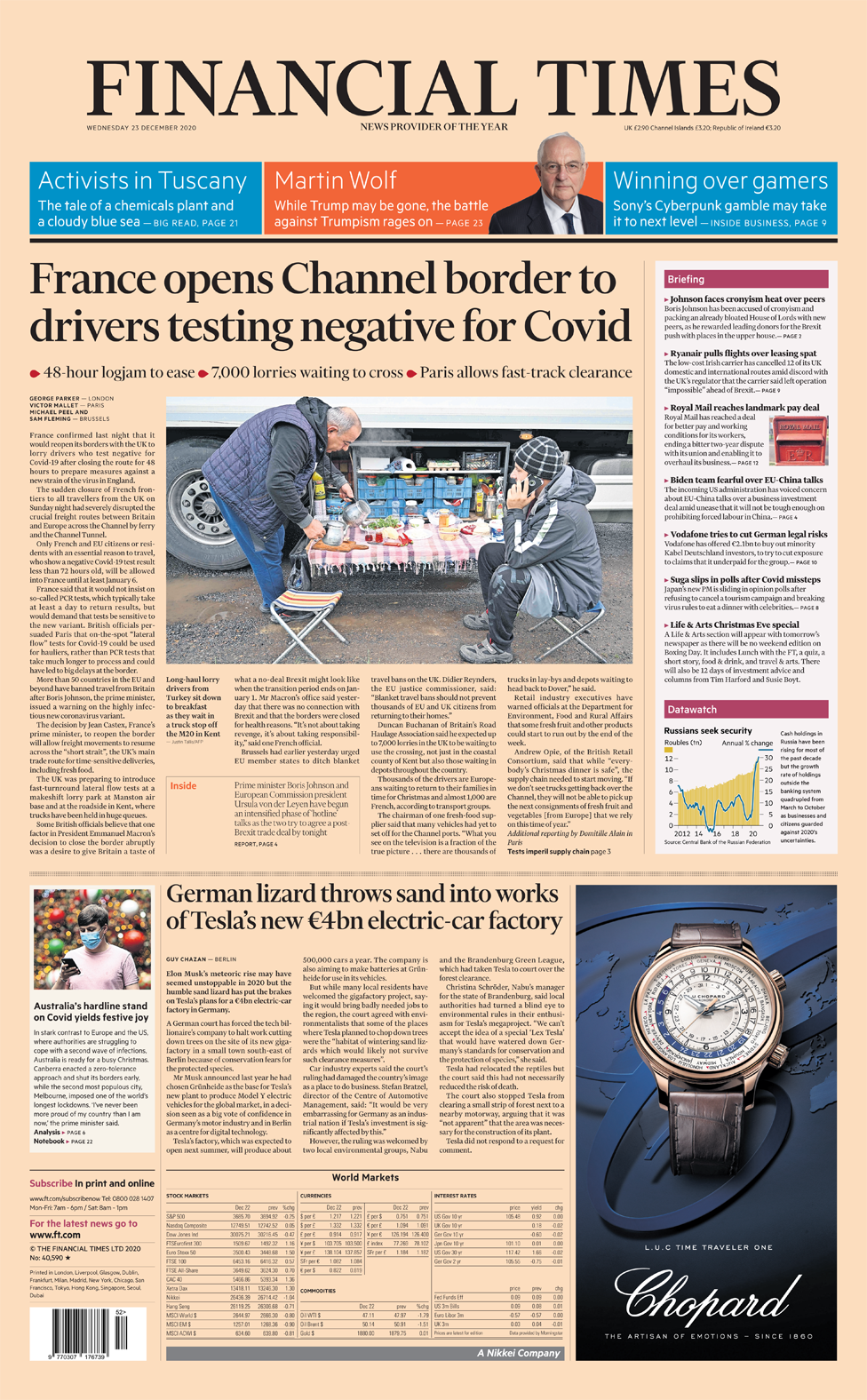 By BBC NewsStaffPublishedduration3 hours agoimage captionA “gold command” meeting of ministers and officials has discussed extending tier four – “stay at home” – to cover more areas of England from Boxing Day, says the Daily Mail. It is one of several papers to report millions more could be placed under the strictest curbs on Saturday.…

Pictures of hundreds of lorries lined up at Manston Airport in Kent dominate the front pages.

“Utter chaos” is the headline in the Daily Mirror, which blames the queues firmly on what it calls the “Tory shambles” over the Covid crisis.

But the Express takes aim at the French. “With friends like these!” its headline reads. The Mail sees the reopening of the French border as a climb down by President Macron, declaring: “Monsieur Roadblock gives way”. The Sun says Mr Macron “caved in”.

According to the Financial Times, British officials believe one factor in Mr Macron’s decision to close the border abruptly was a desire to give the UK a taste of what a no-deal Brexit might look like. However, it quotes a French official as saying: “It’s not about taking revenge, it’s about taking responsibility.”

A British government source tells the Times: “We think the ban on UK freight was unnecessary. France was left isolated by the European Commission on this.”

The Telegraph, Sun and the Mail lead with reports that many more areas of England could be put under the strictest tier four – “stay at home” – measures from as early as Boxing Day.

The Telegraph says hotspots of the new Covid variant have been found in Cumbria and Devon as well as large parts of Sussex, Surrey, Essex and Norfolk, just beyond the borders of the current tier four. According to the Mail, the restrictions could be announced on Wednesday.

For its main story, the Guardian says NHS leaders in England have raised concerns about the deployment of the coronavirus vaccine, with more than half of hospital trusts and two-thirds of GPs yet to receive supplies.

The paper quotes the chair of the British Medical Association’s GP committee, Dr Richard Vautrey, as saying: “GPs who haven’t got it yet are frustrated because they want to be getting on and vaccinating their patients.” The Department of Health tells the paper it has sufficient doses to maintain the vaccination programme, and it’s working closely with Pfizer to ensure supplies keep arriving in the UK.

Finally, what do you do with the large turkey you ordered that you don’t need now because Christmas has suddenly become a smaller affair?

The Telegraph reports that butchers are refusing to cancel turkey orders because of their duty of care to suppliers. Instead, they are offering tips on how to make use of a big bird. One butcher in Warwickshire is encouraging customers to “enjoy the leftovers”.

Another, in south-east London, is advising them to re-roll their turkey into four joints so they can freeze what they can’t eat – and have it at Easter.