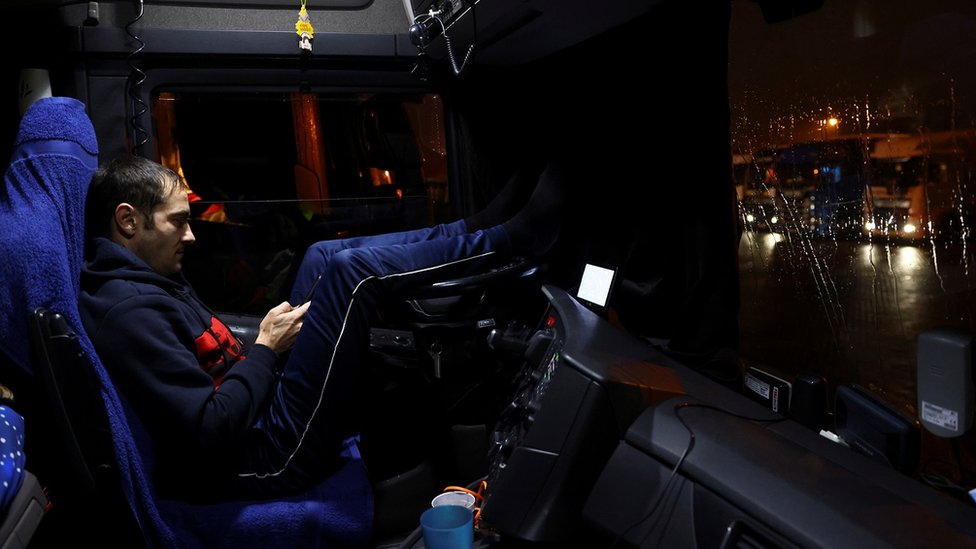 Publishedduration33 minutes agomedia captionMany drivers are stuck in Kent as France remains closedFrance will start letting traffic from the UK back in from Wednesday after the nations reached agreement over their shared border, closed amid concerns over a new coronavirus variant.Freight drivers and some passengers, including EU citizens, will be among those allowed to return…

France will start letting traffic from the UK back in from Wednesday after the nations reached agreement over their shared border, closed amid concerns over a new coronavirus variant.

Freight drivers and some passengers, including EU citizens, will be among those allowed to return – if they have a recent negative test for the virus.

Some 2,850 lorries have been stuck in Kent since the border shut on Sunday.

NHS Test and Trace staff and the military will be deployed for testing.

Planes, boats and Eurostar trains will resume on Wednesday morning.

Under the agreement between the two countries, admittance to France will be granted to those travelling for urgent reasons, including hauliers, French citizens, and British citizens with French residency.

But in order to travel, they will need to have received a negative test result less than 72 hours before departure.

Rapid lateral flow tests, which can detect the new strain and give a result in about 30 minutes, will be used rather than the 24 hours required for so-called PCR tests.

The drivers will receive the result by text message, and this message would give them the right to cross the Channel.

A “protocol is still being finalised” to work out what to do with those drivers who test positive, a government source told the BBC.

In an interview with broadcasters, Mr Shapps said enough tests had been sent to Kent to test all those who wanted to return by Christmas, but suggested it could take until Christmas for congestion to be relieved near ports.

Mr Shapps warned hauliers against travelling to Kent until further notice to alleviate congestion at ports.

He said: “I am pleased that we have made this important progress with our French counterparts this evening. This protocol will see the French border reopen to those travelling for urgent reasons, provided they have a certified negative Covid test.

“We continue to urge hauliers not to travel to Kent until further notice as we work to alleviate congestion at ports.”

The arrangement agreed with the French government will be reviewed on the 31 December, but could run until 6 January, the Department for Transport said.

The French government will also carry out sample testing on incoming freight to the UK.

The announcement comes after the EU Commission urged member states to drop their travel bans to avoid supply chain disruption.

More than 50 countries have banned UK arrivals following widespread concern about the spread of the new variant.

No lorries have been leaving the Port of Dover or Eurotunnel to France.

Kent County Council leader Roger Gough told the BBC on Tuesday afternoon that 2,220 vehicles were at the temporary lorry park at Manston, while 632 were still being held on the M20.

It comes as Tesco said it would be reintroducing temporary purchasing limits on some essential products, including toilet rolls, eggs, rice and hand wash.

The British Retail Consortium warned that trucks needed to be able to start travelling again in the next 24 hours to “avoid seeing problems on our shelves”.

Andrew Opie, its director of food and sustainability, told the Commons business, energy and industrial strategy committee: “What we’ve been told by members is that unless those trucks can start travelling again and go back to Spain and Portugal and other parts of Europe, we will have problems with fresh produce from 27 December.”

The Channel is a vital trade route, with about 10,000 lorries a day travelling between Dover and Calais at Christmas, largely bringing in the freshest produce.

A further 36,804 people in the UK have tested positive for coronavirus and there were 691 deaths within 28 days of a positive test, according to Tuesday’s government figures.

It is the largest daily number of cases recorded yet, though it is thought the infection rate was higher during the first peak in spring when testing was much more limited.

Meanwhile, truck drivers stranded in Kent have called for immediate help from the government, with hundreds facing a third night sleeping in their cabs.

Truck driver Laszlo Baliga, 51, from London, spent Tuesday delivering food and water to those lined up at Manston Airport, a disused airfield.

He began taking supplies after Hungarian drivers stranded in the lorry park posted on Facebook asking for help, with one telling him the only toilet on the site had been blocked.

He said he and friends had so far spent more than £500 on food and water for drivers at the site.

Mr Baliga said: “We have got ready-to-eat sausages, bread, tomatoes, lettuce, coffee. Basic foods for now for the drivers.

“We like to help because this is a difficult time.”

Ronald Schroeder, 52, from Hamburg in Germany, said: “I am now staying in a hotel, but in front of the hotel there are thousands of people without any rooms waiting to come over the Channel crossing.

“I feel a little bit like Robinson Crusoe on an island.”

The government defended the facilities for stranded drivers, saying there were “more than adequate health and welfare provisions available”.

Are you a lorry driver? Have you been affected by the restrictions? Share your experiences by emailing haveyoursay@bbc.co.uk.