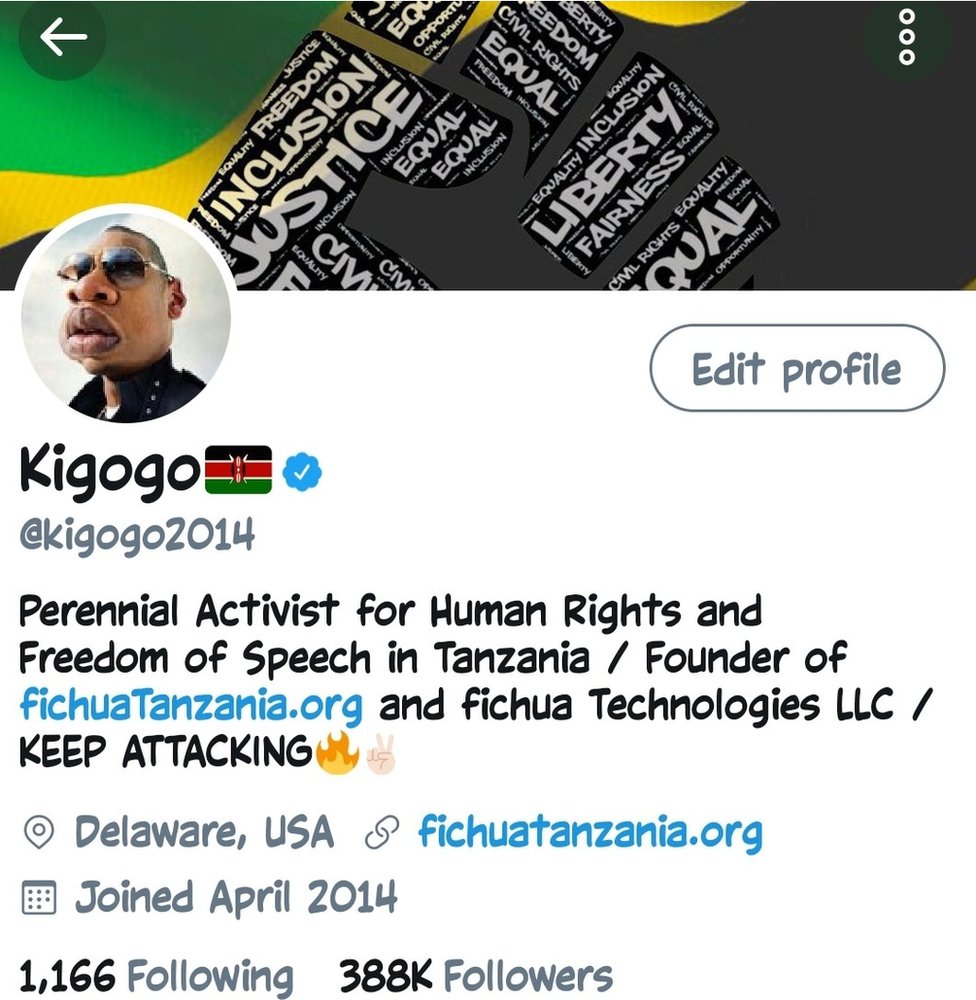 By Dickens OleweBBC NewsPublishedduration3 hours agoimage copyrightAFPimage captionTwitter accounts of several activists were targeted by the copyright attackTwitter’s policy that deals with the infringement of copyright is increasingly being used to maliciously target accounts run by Tanzanian human rights activists in order to silence them, internet rights campaigners allege.Every day on Twitter, Kigogo – a…

Twitter’s policy that deals with the infringement of copyright is increasingly being used to maliciously target accounts run by Tanzanian human rights activists in order to silence them, internet rights campaigners allege.

Every day on Twitter, Kigogo – a Swahili name that means a VIP or swashbuckling tycoon – doles out the latest gossip from Tanzania’s corridors of power.

The details are embarrassing and shocking at times but Kigogo’s nearly 400,000 Twitter followers love these revelations, dubbing Kigogo “our president of the Twitter republic”.

But critics have accused Kigogo of embellishing incidents and sometimes getting things wrong.

“I’m a whistleblower and I expose corruption and human rights abuses in the country,” Kigogo, whose identity is a closely guarded secret, told the BBC.

Internet rights campaigners allege that the policy is increasingly being used by “repressive governments” such as Tanzania’s to silence critics.

Twitter has not responded directly to these allegations but did release a statement in October decrying the blocking of the social media platform ahead of the election.

In one instance that Kigogo described, more than 1,000 tweets from @Kigogo2014 were copied and used to set up three websites, the complainants then used those websites to say that their copyright had been breached.

“After my account was suspended I reached out to Twitter but it was like I was dealing with bots not humans. I was getting programmed responses. No human brain was involved,” Kigogo said.

The attack came days after Kigogo tweeted about an alleged scheme by the ruling party to tamper with ballot papers ahead of the elections, in which President John Magufuli was seeking a second term.

The Tanzania National Electoral Commission denied allegations of fraud before and after the election.

The complainants appealed to Twitter to crack down on Kigogo for violating the US’s Digital Millennium Copyright Act, or DMCA, which Twitter and other popular US-based technology companies have to comply with around the world.

‘They wanted to unmask me’

The organisation says it has dealt with nine cases where copyright complaints have been used to target accounts from Tanzania.

“After Twitter suspended my account I was asked to give my personal information like my address and phone number which they said will be shared with the complainant,” Kigogo said.

“The strategy here was for the Tanzanian intelligence to find out more details about me that would help them unmask my identity, but I refused to comply.”

Kigogo’s account was suspended twice, for a total of 12 days.

Before the October attack “the account had been hacked… three times by, I suspect, Tanzanian intelligence”, Kigogo said.

The BBC asked Twitter for a comment but a spokesperson for the company referred us to a tweet the company posted on the eve of the Tanzania election urging the government to lift an internet shutdown.

The internet disruption started days before the vote.

The Dutch ambassador to Tanzania recently asked why the social media platform was still restricted.

According to Peter Micek, head of the legal arm of internet rights group Access Now, Tanzania’s telecoms regulator had allegedly installed equipment that could throttle entire networks, block websites and degrade traffic so that video or photos could not be transmitted.

The BBC sought comment from the Tanzanian regulator but it has not responded.

Foes and supporters alike have been involved in frenzied speculation about the person behind @Kigogo2014 Twitter account and where they were based.

Some say it is being run by a well-connected state official or by a proxy.

Others have attempted to look for clues in the use of the caricatured face of hip-pop artist Jay Z as the account’s profile photo, an image that has been used by several Kigogo copycat accounts.

Several Tanzanian officials have publicly said they were looking for the person running the Twitter account, accusing them of incitement, leaking government secrets, spreading lies and threatening national security.

Kigogo’s tweets are often copied and forwarded on WhatsApp feeding a parallel information system in a country where there’s been an intensified crackdown on mainstream media and government critics since President Magufuli came into office in 2015.

Journalist Maria Sarungi Tsehai, whose media business was shut down by the government, told the BBC that Twitter was the only place many influential Tanzanians felt they could gather to express their views.

“It’s a place for unfiltered comments and opinions,” she said.

She therefore couldn’t stay quiet after Kigogo and five other prominent Twitter accounts were suspended after copyright complaints days before the election.

Shortly after Ms Tsehai wrote an open letter to Twitter’s founder and CEO Jack Dorsey, asking him “to stop repression and our silencing through your well meaning system of managing copyright violations”, the accounts were reinstated and some verified with the help of Access Now.

Although Kigogo feels reassured about the account’s “added protection” and that Twitter was now aware of the nefarious misuse of its copyright policy, Kigogo says the company should do more.

“Things only changed after Maria wrote to Jack Dorsey, but I think they need to strengthen their due diligence system of checking copyright claims.

“If, for example, it’s a company then all documents that legitimise that company need to be vetted and confirmed, that’s the only way they can stop the fake claims.”

“The increasing trend of authorities exploiting copyright loopholes in Tanzania is incredibly concerning and poses a threat to freedom of speech across the entire continent,” Berhan Taye from Access Now told the BBC.

She added: “Social media platforms affected by the copyright loophole have no choice but to urgently address this issue, and help ensure governments can no longer deploy this tactic against their critics.”

Kigogo continues to regale his followers with juicy details but also relishes in the mystery the Twitter account has created and hopes it continues to keep Tanzanians guessing which pronoun best describes who he/she/they is or are.

The BBC has asked the spokesperson of the Tanzanian government for comment on the allegations made in this article, but we have not received a response so far.