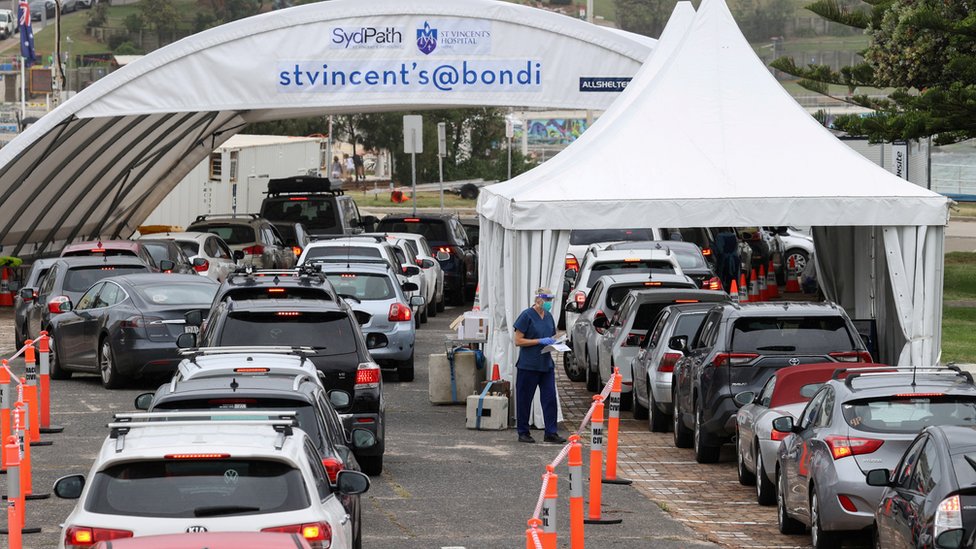 Publishedduration5 hours agoimage copyrightReutersimage captionMore than 44,000 people were tested in a single day, officials saidSydney has recorded its fewest number of new coronavirus cases in several days, raising hopes the Australian city may contain a recent outbreak.The city has seen 90 infections since the outbreak was detected in its Northern Beaches region last week.On…

Sydney has recorded its fewest number of new coronavirus cases in several days, raising hopes the Australian city may contain a recent outbreak.

The city has seen 90 infections since the outbreak was detected in its Northern Beaches region last week.

On Tuesday, authorities praised a record 44,000 people for turning out to get tested in the previous day.

The nation is currently seeing almost no new cases outside Sydney.

That has prompted every state government outside New South Wales (NSW) to enact entry bans on travellers from the state’s capital.

Neighbouring Victoria reported one new infection on Tuesday – a traveller from Sydney who had entered quarantine.

The NSW government again praised the 250,000 residents of the Northern Beaches for abiding by a strict stay-at-home lockdown, in place until Wednesday.

Prime Minister Scott Morrison said the community’s geographic separation – by Sydney Harbour – from much of Sydney had probably also helped slow the spread of the virus.

State officials said they had identified more than 100 spots across the city where people had travelled while infectious.

But encouragingly so far, there had been just one example of community transmission outside of the Northern Beaches.

NSW Premier Gladys Berejiklian said the low numbers “might creep back up”, but added: “I would much rather be hovering where we are now than where we were two or three days ago.”

She again praised the state’s contact-tracing team, which she has previously described as possibly the best in the world.

Outside the Northern Beaches, all Sydney residents have been advised to minimise their social activity and to wear a mask in public spaces. Indoor gatherings have been limited to 10 guests.

“I think to date the policy settings we’ve had in place coupled with the community’s response has demonstrated our strategies are working,” said Ms Berejiiklian.

However, she indicated there could be further changes to restrictions in time for Christmas.

Australia has become known for its swift and aggressive response to outbreaks this year. State governments have acted quickly to lock down hotspot areas and conduct rapid contact-tracing and testing.

More on Covid in Australia:

Where these efforts have failed or been too slow, state officials have taken additional measures to crush the virus.

Australia’s second-largest city, Melbourne, endured a severe lockdown from July to October, successfully eliminating an outbreak which at its peak had reached more than 700 cases a day.

Australia so far has recorded 908 deaths and 28,200 cases overall – a level far lower than seen in many other nations.

The country took early decisions to close the nation’s borders and mandate hotel quarantine for returning travellers from overseas.

The hotel quarantine system remains the main source by which the virus has entered the community – as seen in previous outbreaks in Melbourne and Adelaide.

It’s also believed to be the source of this latest Sydney outbreak, although officials are unsure how it entered the community.

One of the eight new cases reported on Tuesday was a healthcare worker who had helped transport travellers in quarantine, officials said.