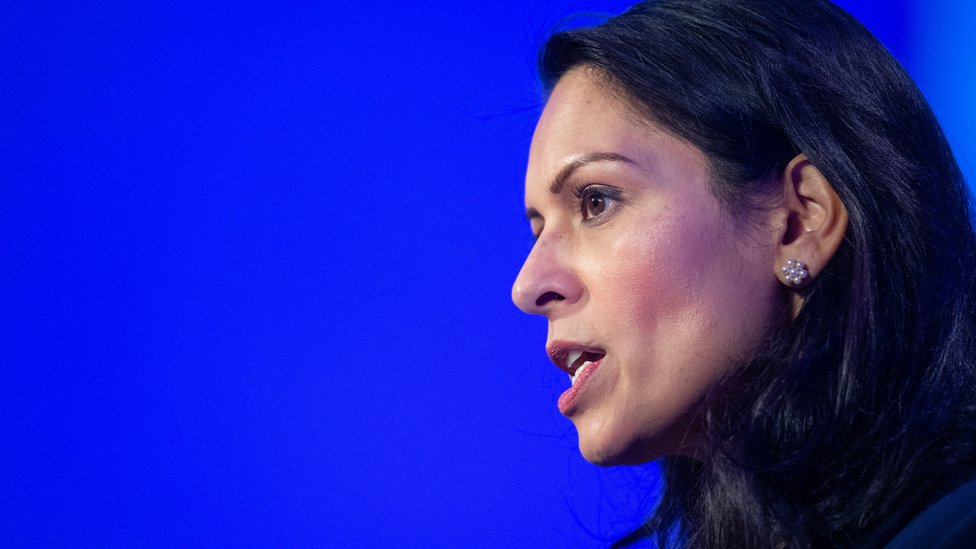 A Twitter post by the home secretary about the deaths of 39 Vietnamese migrants led to the trial of alleged people-smugglers being halted.

The migrants were found dead in a lorry trailer in Essex on 23 October 2019.

On the anniversary, Priti Patel tweeted they died “at the hands of ruthless criminals” and jurors were warned to ignore comments from politicians.

The Home Office said the tweet was quickly deleted and “not intended to reference” those involved in the trial.

On 23 October, Ms Patel, MP for Witham, Essex, posted: “One year ago today, 39 people lost their lives in horrific circumstances at the hands of ruthless criminals.”

The trial was temporarily halted as lawyers in the case discussed what action should be taken.

In the absence of the jury, Alisdair Williamson QC, who was defending lorry driver Eamonn Harrison, complained about the description of “ruthless criminals”.

He said: “It is unhelpful to say the least and a lot worse could be said.”

The judge in the case, Mr Justice Sweeney, brought the jury back and warned them of comments made about the case outside of the court room.

“No doubt the anniversary will be commented on whether in mainstream media or social media,” he said.

“And whether by politicians, likewise journalists or others, inevitably there is a risk that such comments may assert or imply guilt of amongst others the men who are in your charge, two of whom are charged with the manslaughter of the victims.

“You must ignore any such comments.”

The tweet was live for more than an hour before it was deleted.

A Home Office spokesperson said: “The Home Secretary’s tweet intended to refer to individuals who were involved in the incident and had already entered guilty pleas.

“The tweet was not intended to reference individuals involved in the ongoing trial. However, as soon as concerns were raised, the tweet was deleted.”

Mr Justice Sweeney adjourned sentencing of all the defendants to 7, 8 and 11 January.