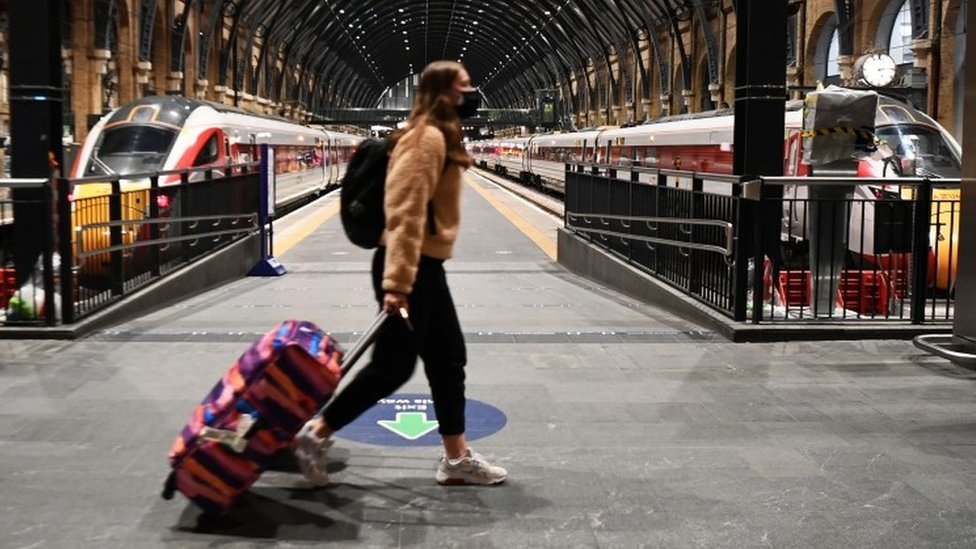 Publishedduration36 minutes agoimage copyrightEPAimage captionMuch of Europe has banned UK travellers along with others around the worldThere is growing international alarm over a new variant of the coronavirus in the UK, with a host of countries imposing travel bans.More than 40 countries have barred UK arrivals, as the EU held talks on forming a common…

There is growing international alarm over a new variant of the coronavirus in the UK, with a host of countries imposing travel bans.

More than 40 countries have barred UK arrivals, as the EU held talks on forming a common policy.

Sweden banned foreign travellers from Denmark after cases of the variant were discovered there.

The new strain is more transmissible but there is no evidence it is more deadly.

As the list of countries imposing travel restrictions on the UK grew, the World Health Organization (WHO) sought to put the risks in context.

WHO emergencies chief Mike Ryan said new strains were a normal part of the evolution of a pandemic, and that it was not “out of control”, contradicting the UK’s Health Secretary Matt Hancock, who used those words on Sunday.

In another development, travellers from South Africa are also facing bars from some countries after another new variant of the virus was discovered that is unrelated to the one found in the UK.

Much of the continent has banned UK arrivals in an attempt to halt the spread of the new strain.

France imposed a ban on passengers and freight from the UK, causing disruption at the key southern British port of Dover.

UK Prime Minister Boris Johnson said he was working with French President Emmanuel Macron to resume trade, and that he hoped the issue would be resolved “as soon as possible”.

The French Transport Minister Clément Beaune said his country would by Tuesday announce what would replace the initial 48-hour ban on travellers and lorries.

In Brussels, officials have been holding talks on finding a co-ordinated response from the EU’s 27 members.

No decision is expected until Tuesday, but one option discussed was demanding that UK arrivals test negative for Covid-19 before they leave.

There was some better news from the continent on Monday, with the EU’s medicines regulator approving the Pfizer-BioNTech coronavirus vaccine, paving the way for jabs to be given as early as Sunday.

And in the rest of the world?

Many other countries, from India, to Iran, to Canada have banned UK arrivals.

The US is yet to follow suit, but two airlines – British Airways and Delta – will only allow passengers who test negative for the coronavirus to fly to New York’s John F Kennedy airport.

Saudi Arabia, Kuwait and Oman have shut their borders completely to international passengers.

Along with Denmark, the new strain has also been detected in Australia, Italy and the Netherlands.

The handful of cases found in Denmark prompted Sweden to ban arrivals from there, the first time it has imposed such restrictions on a neighbour.

“There is an obvious risk that Danes will be tempted to cross over to Sweden to shop for Christmas presents,” Home Affairs Minister Mikael Damberg said, according to the AFP news agency.

Some experts believe that the new strain has already spread beyond where it has been reported, crediting the UK’s use of genomic surveillance for detecting it.

“I think we will find in the coming days that a lot of other countries will find it,” Marc Van Ranst, a virologist from the Rega Institute for Medical Research in Belgium, told broadcaster VRT.

How are the new restrictions affecting you? Share your experiences by emailing haveyoursay@bbc.co.uk.