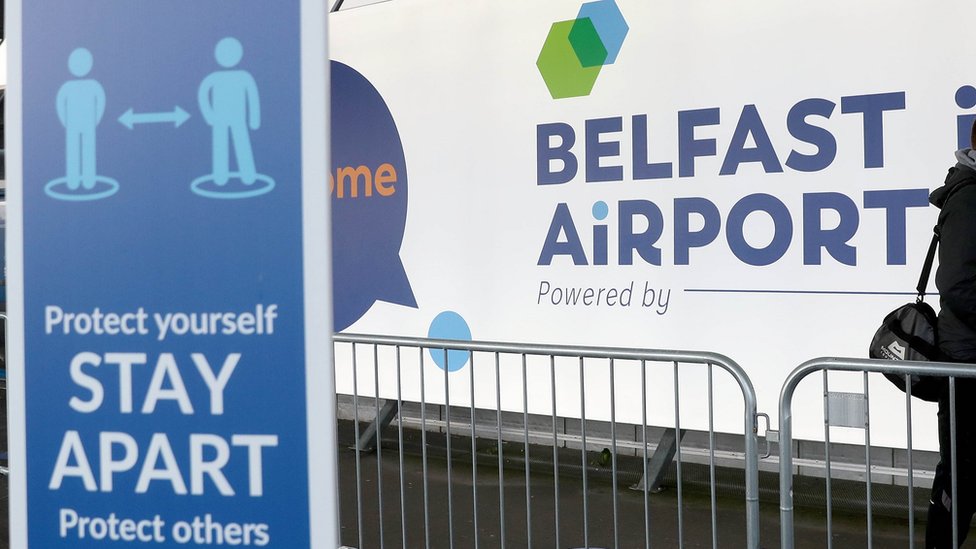 Publishedduration2 hours agoThe NI Executive has voted against imposing a travel ban from Great Britain into Northern Ireland.An emergency meeting of ministers was called late on Monday night to discuss proposals.Sinn Féin and the SDLP supported the move but the DUP, Ulster Unionists and Alliance voted against. The executive later unanimously backed plans to issue…

The NI Executive has voted against imposing a travel ban from Great Britain into Northern Ireland.

An emergency meeting of ministers was called late on Monday night to discuss proposals.

Sinn Féin and the SDLP supported the move but the DUP, Ulster Unionists and Alliance voted against.

The executive later unanimously backed plans to issue new guidance against all but essential travel between NI, GB and the Irish Republic.

The executive also supported advice from Health Minister Robin Swann that people arriving into Northern Ireland from Great Britain and the Republic of Ireland should self-isolate for 10 days.

Sinn Féin Finance Minister Conor Murphy had written to Mr Swann expressing “dismay and astonishment” that he was not moving immediately to instigate a ban on travel.

Sinn Féin proposed taking the matter to a vote late on Monday evening, but it fell by a simple majority.

‘Only travel outside NI if essential’

Commenting after the meeting, First Minister Arlene Foster said a new variant of coronavirus “necessitated changes to our approach”.

“Our science advisers believe that this variant is already in the Republic of Ireland, as well as London, the south east of England and across Europe.

“People should only travel outside NI if essential as outlined on the FCO (Foreign and Commonwealth Office) website,” she continued.

Earlier, Mrs Foster said four cases in NI were being tested to determine if they are the new highly infectious variant.

A paper brought by the health minister to the executive said a travel ban could have “serious adverse implications” for the financial viability of aircraft and ferry routes.

The document, seen by BBC News NI, also said that if the new variant of coronavirus was present in NI, the benefit of restricting travel would be “somewhat reduced”.

Although it is believed to be present, this has not yet been confirmed, the paper added.

The advice from the chief medical officer and chief scientific adviser to the executive was that the “relative risk” for travellers from GB having Covid-19 is less than 1 in 100, and “significantly less” for the new variant.

It goes on to say there would be “merit in limiting travel” if the variant was not present in NI, but in its absence a precautionary approach is advised including possible limiting of travel from the Republic of Ireland, given the “current disease trajectory” there.

Mr Swann’s paper also called for exploring the use of “locator forms” for travellers arriving in NI.

After the meeting, the health minister tweeted that he “pleased” the executive had agreed his paper and that more work was “needed on option of legal travel ban, both legally and logistically – vital supplies to NI and essential travel need to be protected”.

Pleased that Exec has agreed my paper tonight, including immediate guidance against all but essential travel between NI and GB/RoI, with all new arrivals here asked to self-isolate for 10 days. 1/2

The move followed action in England, Scotland and Wales on Saturday, cutting the previously agreed five days to just one.

Another seven coronavirus-related deaths were reported in Northern Ireland on Monday.

The Department of Health’s death toll is 1,203. There were also a further 555 cases of Covid-19 diagnosed.

There are 446 people with Covid-19 in hospital. Thirty are in intensive care, with 24 on ventilators.