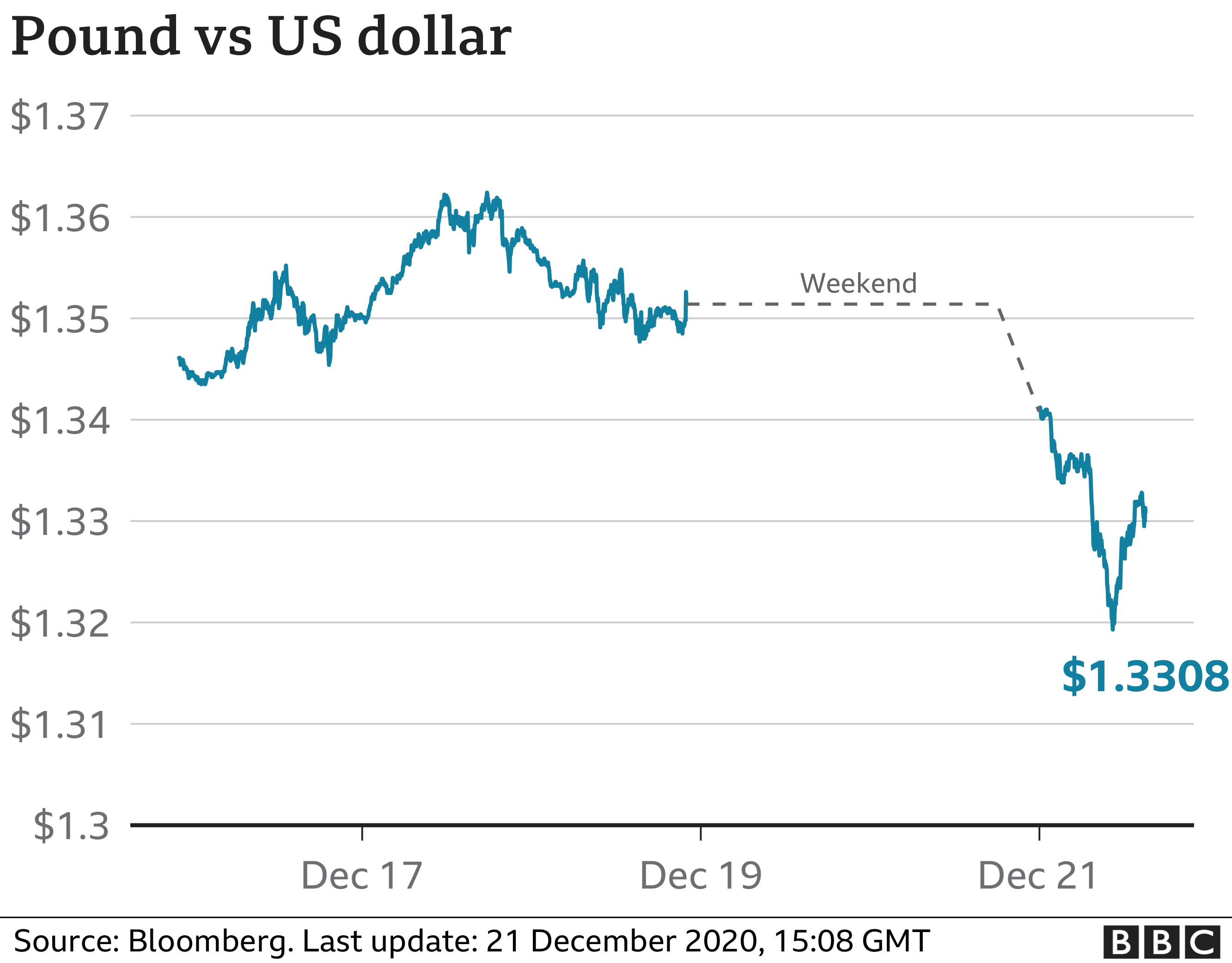 Publishedduration9 minutes agoUS shares have fallen as concern over the UK’s new Covid-19 variant outweighed relief over a Congressional package of pandemic aid.At mid-day trade in New York, the S&P 500 and Nasdaq indexes were down roughly 1%, while the Dow Jones was less than 0.5% lower.London’s FTSE 100 index closed down 1.7% after several…

US shares have fallen as concern over the UK’s new Covid-19 variant outweighed relief over a Congressional package of pandemic aid.

At mid-day trade in New York, the S&P 500 and Nasdaq indexes were down roughly 1%, while the Dow Jones was less than 0.5% lower.

London’s FTSE 100 index closed down 1.7% after several EU countries closed their borders to the UK.

The main German market fell 2.8%, while in France the key bourse dropped 2.4%.

The rout was replicated on other European markets. Air France-KLM shares dropped4%, while planemaker Airbus was down roughly 3%.

As well as renewed concern about Covid-19 cases, UK investors were reacting to another missed deadline in trade talks with the EU.

London and Brussels are trying to reach a trade deal before the Brexit transition period ends on 31 December.

The talks are set to continue on Monday between negotiators.

The stalled negotiations have been partly responsible for the pound fluctuating over recent weeks. Optimism that a deal would be struck had triggered a four-day winning streak for sterling, pushing it back up to just under $1.36 before it reversed course again.

Earlier on Monday, the pound fell towards $1.32, with the dollar also being buoyed after a $900bn (£660bn) plan to help the US economy weather the coronavirus pandemic was agreed.

However, the pound later regained some of those losses, rising above $1.33.

“The US got its stimulus package through, but it seems that was largely priced in and investors are more concerned with the new strain of Covid-19,” said Craig Erlam, analyst at Oanda trading group.

European nations have begun to impose travel bans on the UK after it reported a more-infectious and “out of control” coronavirus variant over the weekend.

Ireland, Germany, France, Italy, the Netherlands and Belgium are all halting flights.

One major sticking point in the Brexit talks is access to the UK’s water for fishing. While the fishing industry accounts for just 0.1% of gross domestic product, (GDP) it is of high political significance.

If a trade agreement is not reached by the end of the month, British firms will revert to trading with the EU under rules established by the World Trade Organization (WTO).

This will mean imports and exports to the EU would be subject to WTO-negotiated tariffs, essentially a tax on goods.

Currency experts have warned that the pound could fall to $1.25 by the middle of next year if no trade agreement is agreed.