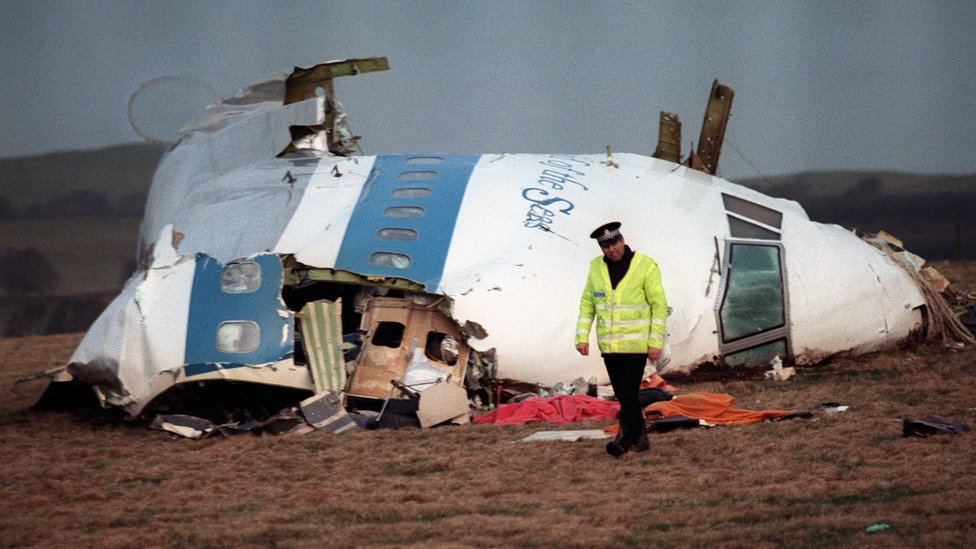 Publishedduration15 minutes agoimage copyrightGetty Imagesimage captionA total of 270 people died in the Lockerbie bombing on 21 December 1988The US has announced charges against a Libyan suspected of making the bomb that blew up Pan Am Flight 103 over Lockerbie, Scotland, in 1988.Abu Agila Mohammad Masud has been charged with terrorism-related crimes, Attorney General William…

The US has announced charges against a Libyan suspected of making the bomb that blew up Pan Am Flight 103 over Lockerbie, Scotland, in 1988.

Abu Agila Mohammad Masud has been charged with terrorism-related crimes, Attorney General William Barr said on Monday, 32 years on from the atrocity.

The deadly bomb attack on the Boeing 747 killed 270 people, including 190 American citizens.

Prosecutors will seek the extradition of Mr Masud to stand trial in the US.

The attack on the London to New York flight remains the deadliest terrorist incident ever to have taken place in the UK, and the second deadliest air attack in US history.

Eleven people on the ground in Scotland were also killed. The victims included 35 study abroad US students who were returning home for Christmas.

The new charges bring Mr Barr’s role in this lengthy terrorism investigation full circle, as he was also US Attorney General when charges were first announced against two Libyan suspects in 1991.

Back then, serving under President George H W Bush, Mr Barr tasked his criminal division head Robert Mueller to look into the bombing. Mr Mueller is now best known for leading the inquiry into Russian meddling in the 2016 presidential election.

Both Mr Barr and Mr Mueller have taken part in remembrance events with families over the years.

Police Scotland’s chief constable, Iain Livingstone, said the charges were a “significant development” and that they will “continue to work closely” with the US and other international authorities. He said it was “inappropriate to comment further” at this time.

What did Mr Barr say?

Mr Barr said he was “pleased to announce that the United States has filed criminal charges against the third conspirator Abu Agila Mohammad Masud for his role in the bombing”.

“Let there be no mistake, no amount of time or distance will stop the United States and our Scottish partners in pursuing justice in this case.”

Mr Barr said the “breakthrough” that led to Monday’s charges came when authorities learned he was being held in Libya. Mr Barr said Libyan authorities provided a copy of their interview with Mr Masud to US officials.

He said Mr Masud allegedly built the bomb and worked with two other co-conspirators. He said late Libyan leader Muammar Gaddafi had also personally thanked Mr Masud “for the successful attack on the United States”.

“At long last this man responsible for killing Americans and many others will be subject to justice for his crimes,” Mr Barr said.

The attorney general added that he is “optimistic” that the Libyan government will hand Mr Masud over.

Who is Abu Agila Mohammad Masud?

Mr Masud is alleged to have been a top bomb-maker for Mr Gaddafi.

Journalist Ken Dornstein, whose brother David was on board the Pan Am plane, went to Libya to track down Mr Masud as part of a 2015 TV documentary by US network PBS called My Brother’s Bomber.

He told the BBC at the time that the Libyan national was “a mystery figure” who was named in the initial investigation and “was said to have been a technical expert”.

The documentary alleged that Mr Masud had also been linked to a bombing at a disco in West Berlin in 1986, which killed three people. It also reported that he was imprisoned in Libya over his role in the 2011 uprising that ousted Gaddafi.

What does the US allege?

Based on travel records and witness statements, US investigators allege in the criminal complaint that Mr Masud flew from Tripoli, Libya, to Malta in December 1988 but met with a Libyan intelligence official ahead of the flight.

Six days later, two other co-conspirators also journeyed to Malta, and the three men allegedly worked together on the explosive device.

The complaint alleges they concealed the cassette that held the bomb in clothing from a store in Malta.

A suitcase containing the device was then placed on feeder flights from Malta to Frankfurt, Germany, and eventually to London’s Heathrow airport, where it was loaded onto the Pan Am flight.

That same day, Mr Masud reportedly returned to Tripoli. Several days later, he and another co-conspirator allegedly met with a senior intelligence official, who praised their work.

How have victims’ families reacted?

Kara Weipz, whose brother was killed in the bombing, said at the news conference: “We are justified, vindicated, our patience and persistence has proved fruitful with this decision today.”

“The motto of the family members over the last 32 years has been the truth must be known,” she said.

Ahead of the briefing, some UK families had criticised the timing of the charges to fall on the anniversary of the attack, accusing the US justice department of using the case for “propaganda purposes”.

John Mosey, whose 19-year-old daughter was killed in the bombing, said he would not accept the invitation to remotely attend the event.

Mr Mosey wrote that he and his wife felt the timing was “bizarre, disrespectful, insensitive and extremely ill considered”.

“Why would you use the anniversary of our daughter Helga’s death along with 269 others to parade once more a highly suspect prosecution?”

Mr Mosey added that why the attack “was allowed to happen is a far more important question to us than ‘who did it?'”

Who has been convicted over the bombing?

Libyan national Abdelbaset al-Megrahi is the only man convicted, in 2001, over the bombing.

Megrahi, who always proclaimed his innocence, launched two appeals against his 27-year sentence, one was unsuccessful and the other was abandoned.

Megrahi was released from prison in Scotland and allowed to return to Libya on compassionate grounds in 2009 after it emerged that he had terminal cancer. He died three years later.