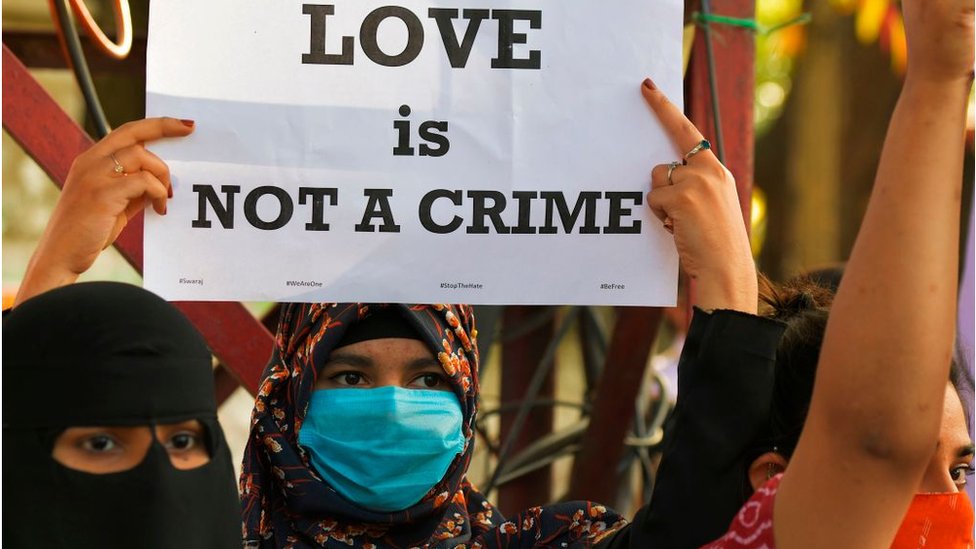 Publishedduration14 minutes agoimage copyrightGetty Imagesimage captionCritics say the law is regressive and offensivePolice in India’s Uttar Pradesh state have arrested a Muslim man for allegedly trying to convert a Hindu woman to Islam.He’s the first to be arrested under a new anti-conversion law that targets “love jihad” – a term radical Hindu groups use to…

Police in India’s Uttar Pradesh state have arrested a Muslim man for allegedly trying to convert a Hindu woman to Islam.

He’s the first to be arrested under a new anti-conversion law that targets “love jihad” – a term radical Hindu groups use to accuse Muslim men of converting Hindu women by marriage.

The law has prompted outrage, with critics calling it Islamophobic.

At least four other Indian states are drafting laws against “love jihad”.

“This is the first arrest under the new anti-conversion law in the state,” a police officer in Uttar Pradesh’s Bareilly district told The Print website.

A complaint was filed by the woman’s father last week in which he accused the man of pressuring his daughter to convert and threatening her life if she didn’t. The woman was allegedly in a relationship with the man but got married to someone else earlier this year.

After his arrest on Wednesday, the man was sent to 14 days of judicial custody. He told reporters that he was innocent and had “no link with the woman”.

The new law carries a jail term of up to 10 years and offences under it are non-bailable.

What is the “love jihad” law?

In November, Uttar Pradesh became the first state to pass a law against “forced” or “fraudulent” religious conversions.

But it might not be the last as at least four other states – Madhya Pradesh, Haryana, Karnataka and Assam – have said that they are planning to bring in laws against “love jihad”. All five states are governed by the ruling Bharatiya Janata Party (BJP), who have been accused of normalising anti-Muslim sentiment.

Critics have called it regressive and offensive, with many concerned that such laws will lead to misuse and harassment since “love jihad” has always been seen as a term used by fringe right-wing radical Hindu groups. It is not a term officially recognised by Indian law.

But it has dominated headlines in the last few months – in October, a popular jewellery brand withdrew an advertisement featuring an inter-faith couple after right-wing backlash accused them of promoting “love jihad”.

And then in November, authorities accused Netflix of the same, pointing to a scene in the television series, A Suitable Boy, where a Hindu woman and a Muslim man share a kiss as the camera pans to the backdrop of a Hindu temple. Madhya Pradesh’s Home Minister, Narottam Mishra, said it hurt “religious sentiments” and directed officials to look into legal action against the producer and director of the series.

Critics of the BJP say religious polarisation has increased since Prime Minister Narendra Modi first swept into power in 2014. Hindu-Muslim marriages have long attracted censure in India but the attachment of a deeper, sinister motive to them is a recent phenomenon.