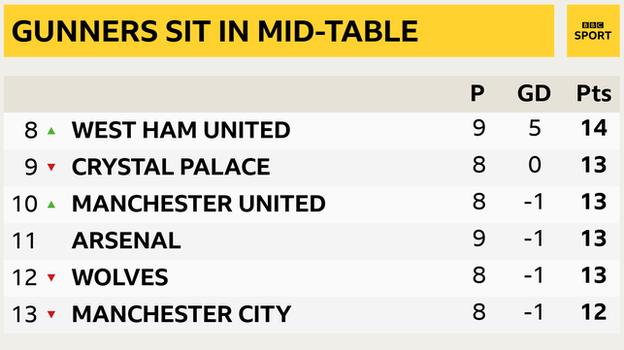 It was a huge positive for Arsenal to hold on for a point with 10 men against Leeds on Sunday, but I can understand why there is concern over the Gunners’ current form.There has to be, because they have clearly stalled or even gone backwards a bit from where they were only a few weeks…

It was a huge positive for Arsenal to hold on for a point with 10 men against Leeds on Sunday, but I can understand why there is concern over the Gunners’ current form.

There has to be, because they have clearly stalled or even gone backwards a bit from where they were only a few weeks ago under Mikel Arteta.

Arsenal are on a run of only one win in their past five Premier League games and they have only scored once in that spell too.

They were playing poorly and creating very little at Elland Road even before Nicolas Pepe was sent off, and their performance in their last game before the international break – a 3-0 home defeat against Aston Villa – was hugely disappointing.

That is why people are now questioning Arteta and his tactics for the first time since he took charge in December last year, but I am confident he will turn things around.

‘In the past, Arsenal would have lost’

Arteta has done so much in a short space of time and, up until now, there has been nothing but improvement but things were never just going to keep on going well.

There are always ups and downs for every new manager, let alone someone in his first job.

True, I was expecting more from Arsenal on Sunday, but we’ve seen a few other performances this weekend where teams were not quite up to their normal level – Manchester City and Manchester United for example – which is understandable straight after the international break.

I think it’s unfair to go over the top with any criticism of Arteta now, especially because of the progress his team have made in recent months.

You also have to consider who they were playing. Leeds were wounded after a couple of bad results and responded by showing exactly what they are all about.

Marcelo Bielsa’s side were full of running and desire, and showed great quality and discipline too.

They never gave Arsenal a moment’s peace and it would have been hard for any team to play well under that kind of intense press.

Of course the Gunners will be disappointed with their performance but sometimes, when you don’t play well, you dig in and take what you can.

Go back 18 months or two years and Arsenal would not have done that. In a scenario like the one they faced on Sunday, they would have been beaten. That’s the difference Arteta has made.

‘A system they weren’t used to or quite sure of’

I still think Arsenal are more suited to playing with three at the back than the four-man defence they used against Leeds.

In midfield, they were missing the injured Thomas Partey, who was so important in their win at Old Trafford at the start of November, and with the three players they had in that area – Granit Xhaka, Dani Ceballos and Joe Willock – they did not look very balanced. None of them seemed to know exactly what they should be doing.

What I saw was a team playing a system that they weren’t used to, or quite sure of. Even their wide men, Willian and Pepe, struggled to deal with the intensity of the Leeds press.

To still pick up a point despite all that was an excellent result, particularly after Pepe’s red card.

I don’t like to see players go down as easily as Ezgjan Alioski did, but Pepe’s actions were stupid and selfish, and he left his side a man down for more than 40 minutes.

What followed, and the resilience, endeavour and desire to stay in the game that I saw from the Gunners players was probably the most pleasing part of the day for Arteta and any Arsenal fan.

Yes, their supporters want to see more quality and more chances being created, and they know in Pierre-Emerick Aubameyang they have got a striker who can take them.

But Arteta’s first objective was to make his side harder to beat and he has achieved that. His team defend well, with a good structure that has given him a foundation to work from.

The next step will be to play more free-flowing football and open up the opposition as well, but I think he has the players in his squad with the quality that will allow him to do that.

It is hard to find the right balance between being entertaining and being too open, and just because Arteta has achieved so much so quickly, doesn’t mean he shouldn’t be given time to get the next part right.