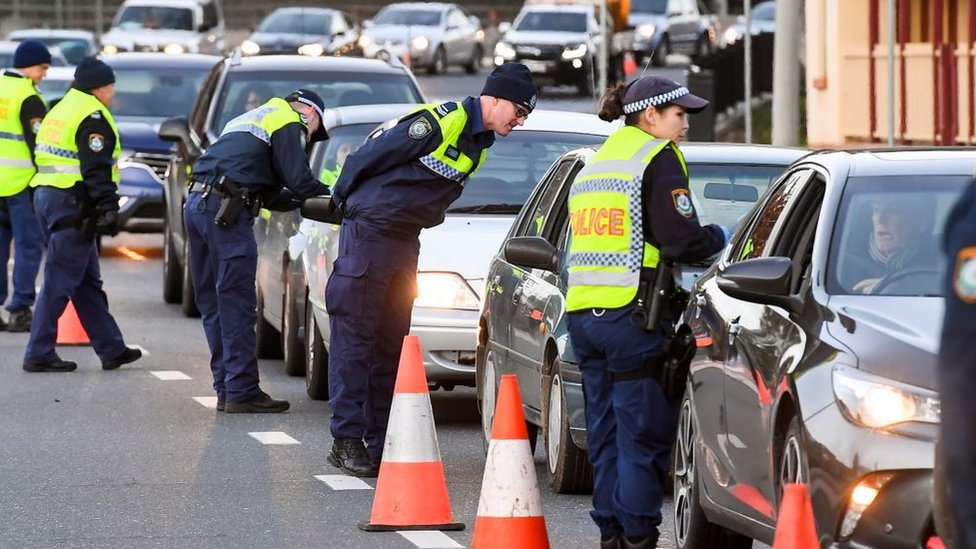 Publishedduration4 hours agoimage copyrightGetty Imagesimage captionPolice checks were put in place on the border between Victoria and New South Wales in JulyThe Australian state of New South Wales (NSW) is to reopen its border with neighbouring Victoria for the first time since July after coronavirus cases there fell to zero.Victoria, which imposed a tough lockdown…

The Australian state of New South Wales (NSW) is to reopen its border with neighbouring Victoria for the first time since July after coronavirus cases there fell to zero.

Victoria, which imposed a tough lockdown after a surge in cases, has reported no new infections since the beginning of November.

The state is also relaxing its rules on wearing face masks.

Australia has recorded about 900 deaths and 28,000 infections in total.

The country has relied on lockdowns, widespread testing and aggressive contact tracing to push daily infections nationwide close to zero.

Australia shut down its international borders early in the pandemic and requires all arriving travellers to spend two weeks in quarantine in designated hotels.

The border between Victoria and NSW – the two most populous states – was closed in July as infections soared in Victoria’s state capital, Melbourne. Flights between the city and the NSW capital Sydney – normally one of the world’s busiest routes – were cancelled. NSW authorities have since been in charge of guarding border crossings.

Melbourne saw cases surge to more than 700 a day in July. It has recorded 90% of the country’s Covid-related deaths.

Taking drastic steps to stop transmission to other areas, it introduced a “ring of steel” with severe stay-at-home rules and a curfew.

Hailing the latest figures on Sunday, Victoria’s Premier Daniel Andrews said they were “a testament to the character and the conviction and the amazing job that every single Victorian has done this year”.

He announced changes to restrictions, scrapping the rule for masks to be worn outdoors as long as physical distancing can be maintained. Larger public gatherings will also be allowed, as will in-store shopping.

Victoria’s Chief Health Officer Brett Sutton said he was confident that community transmission was no longer occurring after 23 days of no new infections.

But he warned that there was still “an ongoing risk until there is a substantial rollout of vaccines across the world, and that is some months away”.

In New South Wales, Premier Gladys Berejiklian welcomed the reopening of the border with Victoria, saying she hoped it would never happen again.

“It will be a whole new era for both of our states,” she said.

However, state officials lifted the lockdown on Saturday – three days earlier than planned – after recording only three new cases on Friday. They said the lockdown order had been based on misinformation told by a man with Covid-19 about his link to a pizza shop.