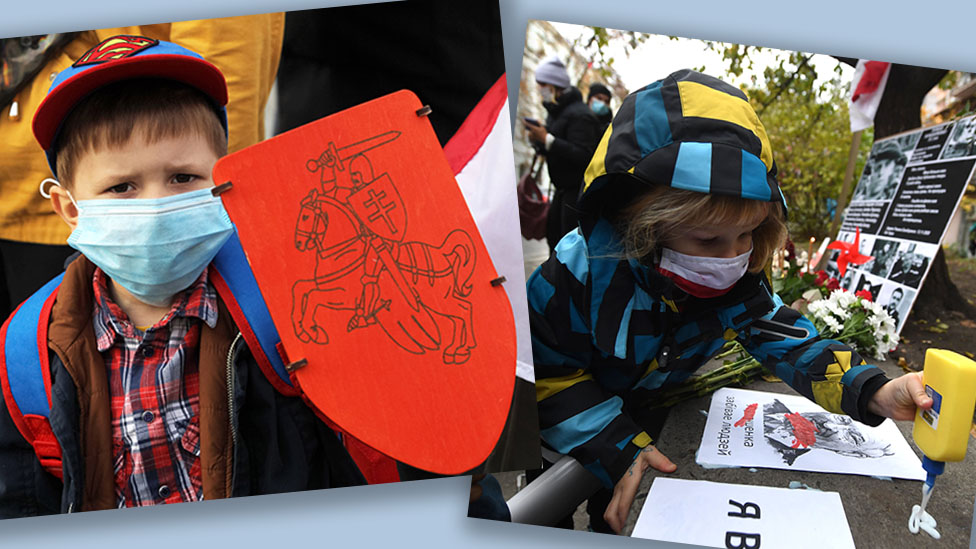 By Margaryta MaliukovaBBC MonitoringPublishedduration7 hours agoimage copyrightGetty Imagesimage captionChildren have taken part in the protests and some of the scenes of brutality have been copied in the playgroundWeek after week, protesters in Belarus have taken to the streets, risking arrest, beatings and sometimes torture at the hands of security forces. Now those scenes are being…

Week after week, protesters in Belarus have taken to the streets, risking arrest, beatings and sometimes torture at the hands of security forces. Now those scenes are being played out not just on the streets but in playgrounds too.

Videos and images of copycat children’s games have emerged, heightening concern about how young people have been affected by the violence.

Belarus has seen unprecedented violence against protesters since they rose up in August to challenge the re-election of Alexander Lukashenko in a presidential vote widely denounced as fraudulent. Opposition leader Svetlana Tikhanovskaya says she won the election and was forced into exile the next day.

Thousands have been detained. At least four protesters have died. Only this month, artist Roman Bondarenko died after what protesters say was a severe beating by security forces.

Videos of children in the playground mimicking police brutality are being shared on social media in Belarus.

In one widely discussed video, one child dressed in black holds a cardboard shield and swipes at another with a stick. A boy shouts in defiance the commonly used protest slogan “Long live Belarus!”

Children split into two. On one side are the riot police – the Omon; on the other are the protesters.

The Omon kids chase and detain the demonstrators – just like police have been doing in cities across Belarus for more than three months.

“The Omon game predominates in our first-year class. The boys run after the girls with sticks,” said one post on social media site Telegram. “Sometimes they even get hit.”

“My wife works in a kindergarten,” said one man on Twitter. “The children play Lukashenko, Tikhanovskaya and the Germans.” Seventy-five years after World War Two, many Belarusian children still play war games with Germans as the enemy.

“Nobody wants to play on Lukashenko’s side,” he points out. “The child picked as Lukashenko walks around and hits others, and the kids hide from him.”

Another Telegram user described seeing the same kinds of game in three different playgrounds. “During the ‘game’ I heard someone shout ‘we have a corpse!’,” he said. Children would lie on the ground and the wounded were given bandages.

‘We used to play war’

Belarusians are divided over the brutality on the streets being mirrored in the playground. Some are alarmed but others are more relaxed, remembering that the games they used to play were no less violent.

“It’s like we used to play war when we were children… but it’s the Omon instead of the Germans,” observed one Twitter user in a discussion of similar stories.

Nevertheless, some of the children appear to enjoy wielding a club.

One post on Instagram describes overhearing a conversation in which a grandson tells his grandmother he wants to be a riot policeman. “The grandmother replies you should not say that, they are scary people. But he tells her again ‘I will join the Omon.'”

So how much harm is this doing to a generation of children growing up with the threat of brutality on their streets?

Child psychologists have suggested there is nothing to worry about, and this is simply a healthy way for children to make sense of the events unfolding around them.

Olya Goma can even see benefits in children taking on the role of the baddies.

“By playing a bad character, they might understand that this is socially unacceptable behaviour, so they will try to avoid such actions in real life,” the psychologist told the popular Rebenok website.

In a game children can control a situation that they otherwise cannot control in real life, according to Anastasia Shapel.

“Games help children understand and live through events,” she argues. Just as Belarusian children used to play at being Belarusians and Germans, now she thinks it’s normal they role-play as riot police with their police vans and detentions.

Psychologist Tatiana Sinitsa urges parents to play with the children and tweak the rules so that “good” wins over “evil”.

“You can be imaginative,” she suggests. “If you touch the Omon with a magic wand, they become good, and start releasing people from police vans and giving them flowers”.

Flowers have become a powerful symbol for the protesters, who face a 16th consecutive Sunday on the streets, and a long winter ahead.