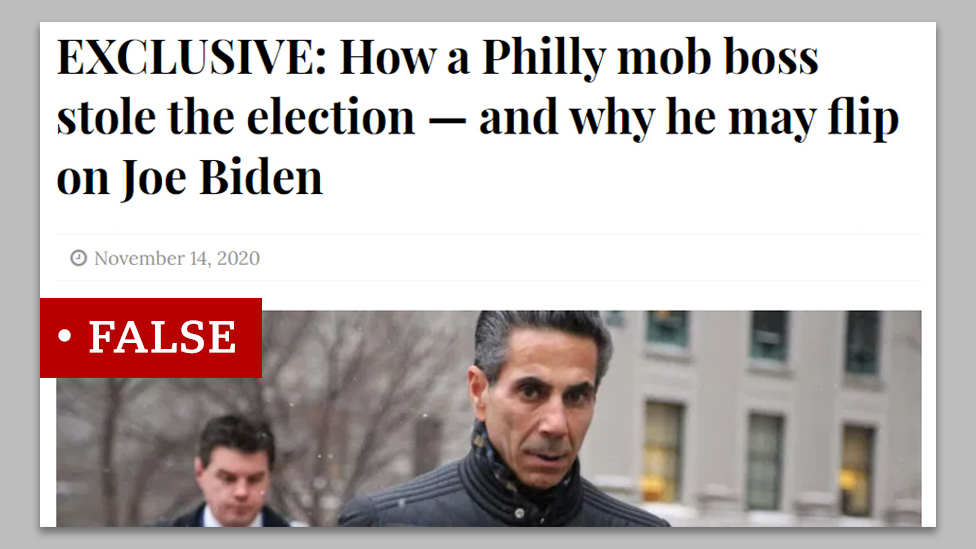 By Alistair ColemanDisinformation specialist, BBC MonitoringPublishedduration57 minutes agoimage copyrightBuffalo Chronicleimage captionHow the Buffalo Chronicle reported its ‘exclusive’ storyA local news website spread false claims that a mafia boss was paid to forge 300,000 votes for Joe Biden – but it’s not the first time that the site has published supposed scoops that weren’t true. The…

A local news website spread false claims that a mafia boss was paid to forge 300,000 votes for Joe Biden – but it’s not the first time that the site has published supposed scoops that weren’t true.

The most recent story appeared this week in the Buffalo Chronicle, based in the city in western New York State.

Despite the site’s local focus, it claimed to have inside information into election wrongdoing in Philadelphia – a much larger city, nearly 400 miles away and in an entirely different state.

The story claimed that reputed Philadelphia mob boss Joe Merlino – aka “Skinny Joey” – was paid $3m (£2.25m) to “steal the election” in Pennsylvania by dumping boxes of counterfeit ballots marked for Joe Biden at a counting centre. It cites “associates” of Mr Merlino and anonymous sources.

The story goes on to say that Mr Merlino might now be ready to “flip on Biden”, exposing the alleged scam to hand Donald Trump victory in the battleground state in exchange for a presidential pardon.

Skinny Joey is real, even if the story is not. Mr Merlino is currently on supervised release in Florida after he accepted a plea deal on a racketeering charge in 2018.

“My client categorically denies all the allegations and Joey would rather die than ever be a snitch,” said his lawyer John Meringolo, in a statement reported by US media.

Despite the denials and lack of evidence, the Buffalo Chronicle’s publisher tells the BBC that he stands by the story.

By some estimates, the story reached millions of potential readers. So how has a local news website with a history of unsubstantiated claims managed to get such a huge audience?

This isn’t the first time that Buffalo Chronicle has been accused of spreading fake news.

While it carries some accurate local news from Buffalo, the state capital Albany and New York state at large – along with opinion pieces – Buffalo Chronicle has previously been investigated for spreading right-wing conspiracy theories about US and Canadian politics.

And it’s those stories that have attracted the most attention.

In 2019, it published several negative and unsubstantiated stories about Canadian Prime Minister Justin Trudeau before federal elections in that country. They accused Mr Trudeau of involvement in a sex scandal and of censoring local media.

According to a BBC analysis, the censorship story was shared tens of thousands of times on Facebook, despite being flagged by fact-checkers for being entirely without foundation.

At the time, the website’s publisher said it had run those stories in “good faith”.

The article about Skinny Joey was shared more than 17,000 times on Facebook to a potential audience of more than three million people, according to figures from social media analysis tool CrowdTangle.

And even Trump campaign lawyer Rudy Giuliani, who continues to make unproven allegations of widespread voter fraud in the election, considers the idea of mafia involvement in the Pennsylvania vote “far-fetched”, according to an interview he gave to Fox News.

Despite the denials, Buffalo Chronicle publisher Matthew Richiazzi stands by the story, without offering any further evidence for the claims made.

“We would expect Mr Merlino’s attorney to say precisely what he has said to date… until such time that President Donald J Trump issues a pardon for current offences,” he told the BBC.

Mr Richiazzi says he’s not bothered by fake news accusations, because of what he considers “profuse and obvious bias” of mainstream sources such as CNN and The New York Times. He says he reports “from an outsider’s posture”.

The Buffalo Chronicle story is just one of a large number of false and misleading stories that have gained traction among supporters of the president.

With the Trump campaign emphasising the narrative of widespread election fraud before, during and after the vote, stories like this that fit the theme can find huge audiences online, even if they have no facts to back them up.

According to BBC research, the Twitter hashtag #StoptheSteal, claiming voter fraud, has been used hundreds of thousands of times since the election.

For those already convinced of a conspiracy to steal the election, the description of it as “the most secure in American history” by US election officials is unlikely to change their minds.