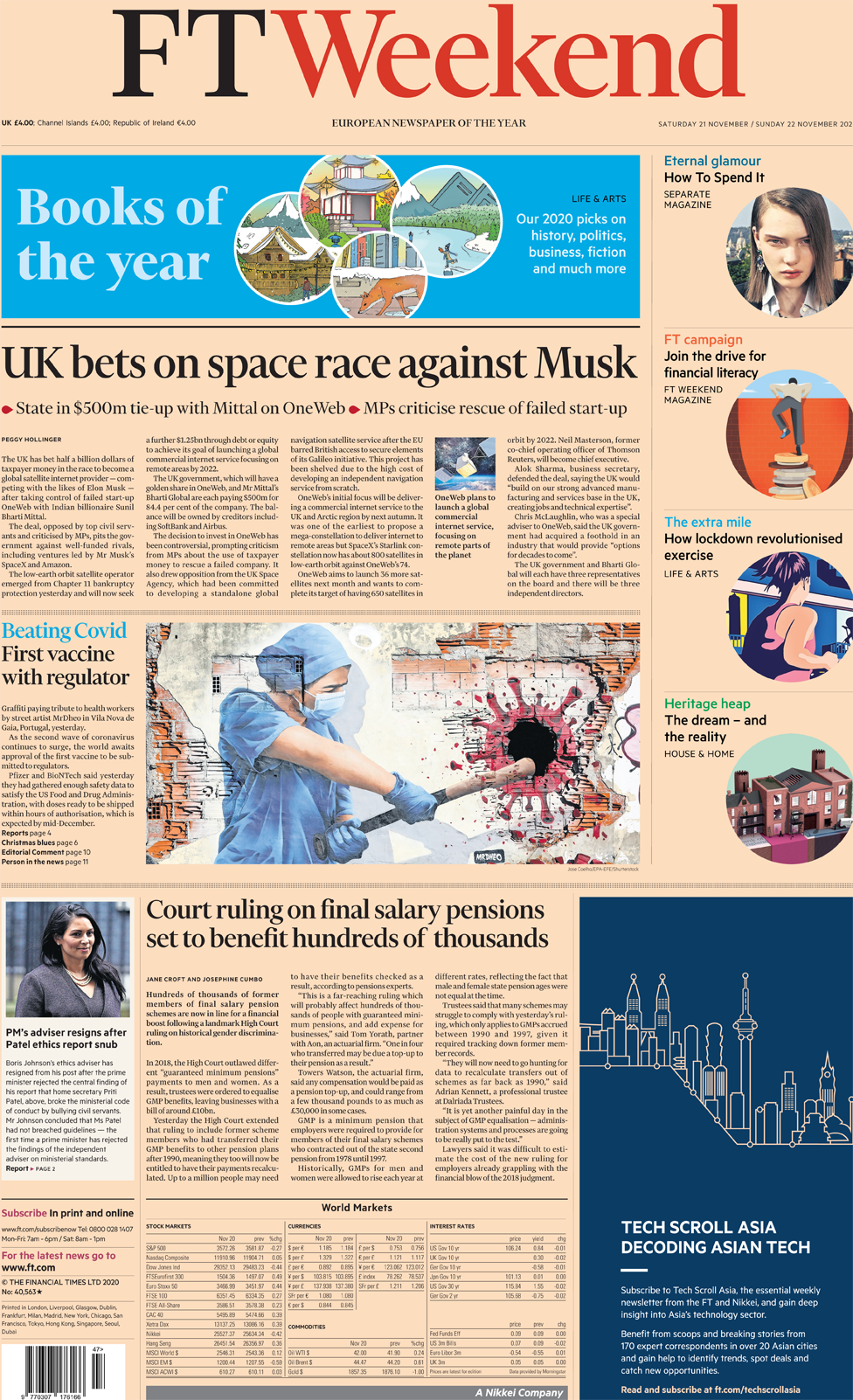 By BBC NewsStaffPublishedduration1 hour agoimage captionFamilies will be permitted to meet during Christmas, the Daily Telegraph reports, citing government plans due to be announced early next week. Boris Johnson is preparing to announce a UK-wide relaxation of the rules between 22 and 28 December, allowing several families to join in one “bubble”. However, the paper…

Both the Guardian and the Times compare Boris Johnson’s refusal to sack Priti Patel to his defence of Dominic Cummings’s trip to Barnard Castle during the first lockdown.

For the Times, the prime minister has again expended political capital by standing by a wounded colleague whom he may yet have to dismiss if further damaging details emerge.

According to the Guardian, No 10’s determination to “brazen out” the row is another sign that Mr Johnson sees following the rules as unnecessary for “his gang”.

The Daily Star also weighs in, asking what it would take to get sacked from this government.

However, the Sun argues that Labour’s “indignation is a sham”.

Fair enough, it says, that Ms Patel has apologised if some staff felt they were being bullied – rather than being urged to “raise their game”.

But some bosses, it says, are highly effective while being demanding and blunt – and the home secretary has been busy “shaking up” a “dysfunctional” department.

The Daily Mail agrees. It says no one should condone bullying in the workplace.

But Ms Patel’s job requires passion – and not “haughty Sir Humphreys deploying every trick to impede demanding, but popular, policies”.

A number of front pages celebrate the prospect of what the i weekend bills as “Vaccines for all by Easter”.

A leaked timetable has revealed that care home residents and staff, health workers, and people over 80 could get the Pfizer jab, if it is approved, next month.

The Daily Mail reports that the 14-day quarantine rule for people arriving in Britain from most countries will be eased next week.

The paper says ministers have approved a plan to cut the isolation time to just five days, after which travellers would face tests for the virus that return results within an hour.

A Whitehall source tells the Mail the move could “make a huge difference” to the aviation and travel industries.

Although Donald Trump continues to resist Joe Biden’s victory in the US presidential election, the New York Times reckons that the latest setbacks to his efforts, in Georgia and Michigan, signal a “rapidly vanishing path” for his attempt to stymie the process.

By next Tuesday, it believes, Mr Biden could be officially declared the winner – with Michigan, Pennsylvania and Nevada all facing deadlines to follow Georgia by certifying their results.

According to the Wall Street Journal, an increasing number of senior Republicans are urging Mr Trump to substantiate his allegations of voting fraud – or to concede.

The New York Post reports that the president has accused Pfizer of playing “corrupt games”, claiming it delayed the release of its vaccine data to sink his re-election.

The Daily Telegraph carries the findings of scientists at the University of Exeter, which suggest that plants may be evolving to hide from humans.

The researchers discovered that a type of flower, which is picked for use in Chinese medicine, blends more closely into its surroundings in areas where it is frequently harvested.

The study points to humans driving evolution of the species into new colour forms – because better camouflage offers it a higher chance of survival.