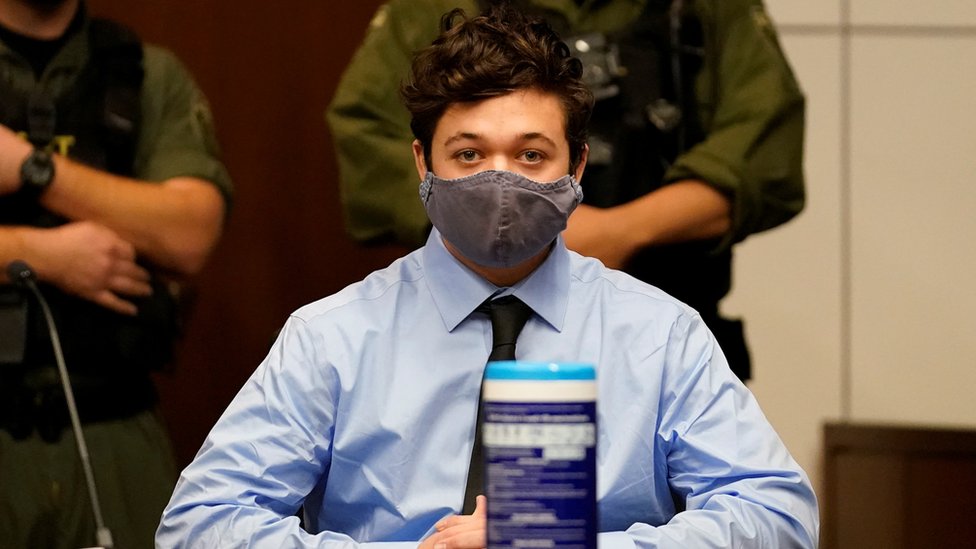 Publishedduration1 hour agoimage copyrightReutersimage captionKyle Rittenhouse says he was acting in self-defenceA teenager charged with killing two people and injuring another during protests against the police shooting of a black man in Wisconsin has been released from police custody on bail.Kyle Rittenhouse, 17, posted a $2m (£1.5m) bond set by a judge in the city…

A teenager charged with killing two people and injuring another during protests against the police shooting of a black man in Wisconsin has been released from police custody on bail.

Mr Rittenhouse is alleged to have shot three people during protests in August sparked by the shooting of Jacob Blake.

He is due back in court on 3 December for a preliminary hearing.

Setting the bail conditions earlier this month, Kenosha County Jail and Court Commissioner Loren Keating said the figure for the bond needed to be high because Mr Rittenhouse, who faces a possible life sentence if convicted, was considered a flight risk.

Mr Rittenhouse, who is from Illinois, is facing multiple charges including the murder of Joseph Rosenbaum, 36, and Anthony Huber, 26, and the attempted murder of Gaige Grosskreutz, also 26.

His lawyer, Mark Richards, argues that there is “overwhelming” evidence that Mr Rittenhouse acted in self-defence.

The father of one of the victims wanted the bail set higher, saying that Mr Rittenhouse thinks he is above the law.

The case has gained widespread media attention, and a fund set up to help Mr Rittenhouse with his legal costs has received a large number of donations.

Kenosha – a city of about 100,000 people on the western edge of Lake Michigan – saw days of violence after a white police officer shot 29-year-old Mr Blake in the back during an arrest on 23 August.

Mr Blake, who was attempting to get into a car where his three children were seated at the time, was left paralysed.

Mr Rittenhouse has said he chose to travel to Kenosha from Illinois to protect local businesses during the demonstrations, which at times turned violent, causing damage to property.

In a telephone interview with the Washington Post published on Thursday, Mr Rittenhouse said he used money for a fund for those left without work amid the coronavirus pandemic to purchase the gun he took to Kenosha.

The shootings came on the third night of protests. Mr Rittenhouse appears in a number of different videos from that night, according to police.

In one video, a person with a rifle, said to be Mr Rittenhouse, appears to shoot a man who tries to assail him – as the teenager then flees he is chased again, falls to the ground and shoots again. Another man falls to the ground, and many shots can be heard.

Mr Rittenhouse told the Post: “I was going into a place where people had guns and God forbid somebody brought a gun to me and decided to shoot me. Like, I wanted to be protected, which I ended up having to protect myself.”

The teenager was later arrested at his mother’s house in Antioch, Illinois, and then extradited to Wisconsin.