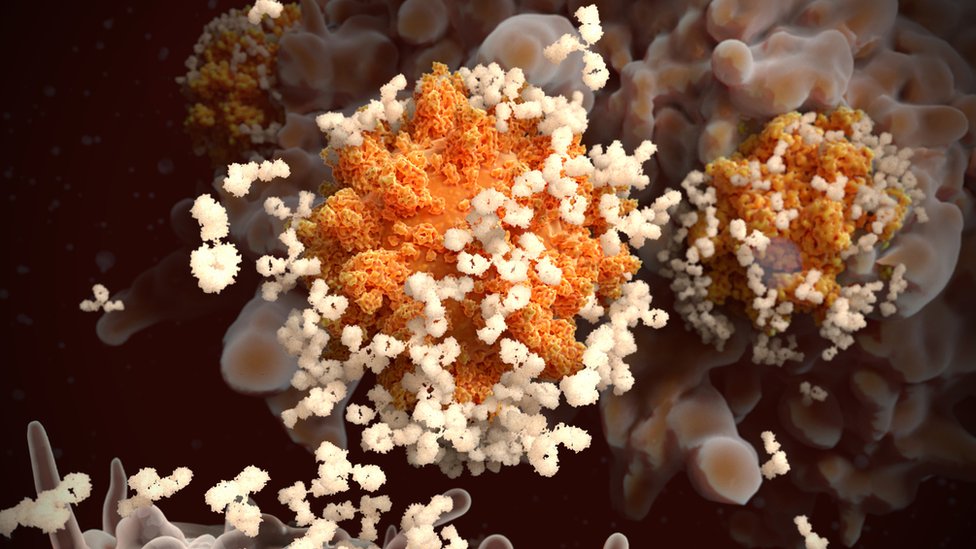 By Rachel SchraerHealth reporter Publishedduration2 hours agoimage copyrightScience Photo Libraryimage captionAntibodies bind to viral proteins, marking them for destruction by other immune cellsCoronavirus antibodies last at least six months and offer protection against a second infection, a study of healthcare workers suggests.Staff at Oxford University Hospitals were regularly tested both for Covid-19 infections and for…

Coronavirus antibodies last at least six months and offer protection against a second infection, a study of healthcare workers suggests.

Staff at Oxford University Hospitals were regularly tested both for Covid-19 infections and for antibodies revealing a past infection.

The more antibodies people had, the lower their chances of re-infection.

A separate study found pre-existing immunity from other coronaviruses also protected against Covid.

They indicated that having the virus once “provides at least short-term protection” from getting it again, she said.

The Oxford study enrolled more than 12,000 healthcare workers of which 11,000 tested negative for Covid-19 antibodies.

Antibodies build up during a viral infection and stop the virus from getting inside the body’s cells and attacking the rest of the immune system.

Of those without any antibodies at the start of study, 89 developed symptomatic infections that were confirmed with a swab test.

Of those that did have coronavirus-specific antibodies, none developed a symptomatic infection during the study period.

There were three individuals who developed asymptomatic Covid-19 infections despite having positive antibody tests, compared with 76 in the group without any antibodies.

But none of the three became unwell.

The results were “consistent with Sars-CoV-2 re-exposure that did not lead to repeat symptoms”, the study said.

The antibodies being studied are those designed to bind to the “spike” of the Sars-CoV-2 virus which causes Covid-19 infections.

This “spike” is what many of the vaccines in development target.

The staff tested were followed for up to 30 weeks.

Earlier in the week, a study conducted by Public Health England looked at T-cells – another element of our immune systems’ response to infection.

It found in June about a quarter of the key workers studied had high levels of T-cells which recognised the Covid virus in their blood – but only just over half of them appeared to have had Covid-19.

The paper concluded this immunity was likely to be there “because of previous infection with coronaviruses other than SARS-CoV-2”, for example the common cold virus.

And those people with high levels of the relevant T-cells “appeared to be protected from Covid-19 in the four months after recruitment”, whether they had previously been infected Covid-19 or not.

But Dr Rupert Beale at the Francis Crick Institute pointed out that this equated to “only a very small proportion of adults (less than 10%, maybe much less than 10%)” who would be protected by pre-existing T cell immunity.

An earlier paper suggested just looking at antibodies might underestimate how many people were protected from re-infection by T cells – another part of the immune response.