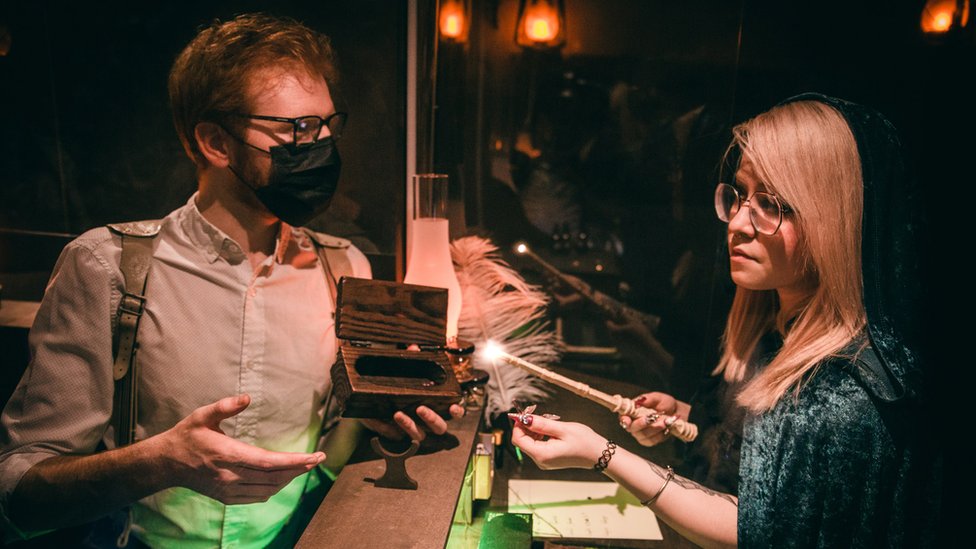 By Mary-Ann RussonTechnology of Business reporterPublishedduration26 minutes agoimage copyrightThe Cauldron Companyimage captionThe Wands & Wizard Exploratorium, in Soho, LondonIt’s not quite Harry Potter, but plenty of magic enthusiasts have fashioned their own wands and used them to control devices around the home.Look online and you can see hobbyists attempting to turn on the TV, control…

It’s not quite Harry Potter, but plenty of magic enthusiasts have fashioned their own wands and used them to control devices around the home.

Look online and you can see hobbyists attempting to turn on the TV, control lights and other devices at home.

This sparked an idea for Matthew Cortland and, during lockdown, he started a business – Wands & Wizard Exploratorium, in Soho, London.

He bet that he could teach people about technology, while having some fun at the same time.

At workshops customers learn how to make wands that can control other products like locked chests and dragon egg lamps.

His wands use the same sensors and circuits that are integral to the internet of things (IoT) – the idea that almost every device you can think of can be connected to the internet and monitored for greater efficiency and convenience.

“[IoT] is very accessible and well-documented. It’s a mature form of technology that’s been around for years and has never been implemented in quite this way,” he tells the BBC.

The IoT was supposed to herald the smart home era, allowing you to control all sorts of devices in your home, wherever you are.

But, according to Paul Miller, principal analyst at research firm Forrester, “the smart home was massively overhyped by vendors, analysts and the media.

“There was this vision that you would walk into your home, speak to your home and all of the devices in your home would be able to speak to each other. That has not happened.”

Back in 2016, analysts Gartner predicted that there would be almost 21 billion IoT devices in 2020 (excluding smartphones, tablets and computers) and 13.5 billion of them would be consumer devices.

Well, here we are in 2020 and Gartner has told the BBC that it abandoned tracking smart home devices a few months ago and is instead focusing on IoT for industrial uses.

So what happened to the smart home dream?

According to Forrester, by the end of 2020, there will be only 37.4 million smart home devices in UK homes, and almost half of them are smart speakers.

“It was the growing availability of the Amazon Echo Dot, where you could get one for £40-£50, that caused things to start to change in 2017,” Mr Miller says.

“Over about a year smart speakers became affordable. It became possible to try one without breaking the bank.”

But experts say having a virtual assistant, smart lights and an internet-enabled fridge does not equal a smart home.

“Everything is portable now… which means there’s no need for a smart home,” explains Joel Espelien, a senior analyst at research firm The Diffusion Group, who has been following the IoT industry for over two decades.

Back in 2008, some homes in the Greater Seattle area were refurbished with what property developers thought would be the foundations of the smart home – output cables in each room and speakers built into the ceilings.

Yet when Mr Espelien viewed properties to buy this year, he found that owners were ignoring these technologies and instead relying solely on a single smart speaker.

“The hotel people also figured out the same thing – that trying to build a smart hotel room was ridiculous, just put in an Alexa-type device that you can pair to your phone.

“What is really smart is the bubble around the individual.”

Foone Turing is a technology influencer in California who specialises in reverse-engineering devices, retro tech history and data archiving.

“You might have a smart pet feeder, a smart thermostat, a smart coffee machine, but since they’re made by different companies and none of them can talk to each other, it’s not really a ‘smart home’,” says the former Google engineer, who has over 95,000 followers on Twitter.

The EU is funding Social Influence and Disruptive Low Carbon Innovations (SILCI), a project exploring the relationship between consumer goods and services, and climate change.

SILCI recently surveyed 673 households to see why the smart home hasn’t taken off.

“We found that the tech nerds were quite cliquey… and they tended to talk to other people like them,” says SILCI’s lead investigator Charlie Wilson, a professor of energy and climate change at the Tyndall Centre for Climate Change Research, University of East Anglia.

The “tech nerds” weren’t talking to other demographics, he says, adding: “It’s very unfortunate that the smart home world has become characterised by what are really silly or stupid examples of technology like smart toasters.”

“Having fridges connected through IoT to the electricity grid is actually really important, because if the grid runs out of power, it can avoid a blackout by powering them down for an hour,” he explains.

Foone Turing says a pet peeve of early adopters is that many smart devices seem to stop working.

“It doesn’t matter how big a company behind an internet-connected system is, you’re always at their mercy to keep the servers running. If the company goes out of business, gets purchased, or just doesn’t want to run the servers anymore, you now have a brick.”

Smart light bulbs are also viewed as being expensive and non-essential.

“Customers were offered the vision of controlling your lights automatically, but actually there’s a perfectly good light switch on the wall,” says Forrester’s Paul Miller.

“Pairing these devices and getting them to all work together is not straightforward. Even for me, it takes time to pair up my Philips Hue light bulbs to Alexa,” he says.

Take a glance at Reddit and you will find thousands of posts by DIY enthusiasts asking for help because they’re struggling to get devices to work together.

It is for this reason that Mr Cortland believes his magical tech start-up has a chance of succeeding. At the moment people can buy a wand to control products also sold by the company, such as a dragon’s egg lamp. But the plan is to produce a smart plug that any appliance can be plugged into and controlled by the wand.

“People want a magic wand that feels real, doesn’t have buttons and screws… and that allows their creativity to continue to move forward,” he says.

“There are devices that control specific things in your home, and we want to make something more universal.”