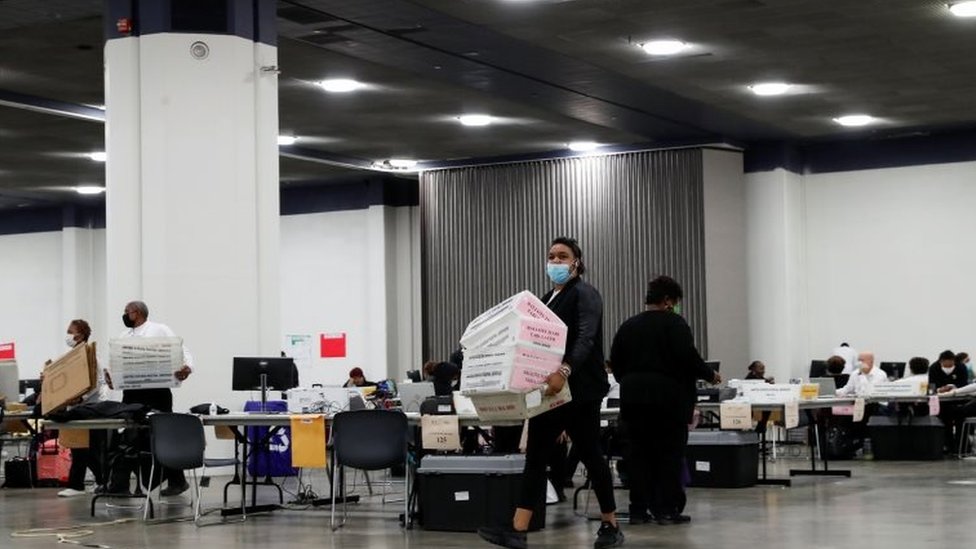 Publishedduration1 hour agomedia captionJoe Biden says Americans are “witnessing incredible irresponsibility” from Donald TrumpUS President-elect Joe Biden’s victory in Georgia has been confirmed by a recount, as legal efforts by Donald Trump’s allies to challenge his defeat were dismissed in three states.The Democrat beat his Republican rival in Georgia by 12,284 votes, according to the…

US President-elect Joe Biden’s victory in Georgia has been confirmed by a recount, as legal efforts by Donald Trump’s allies to challenge his defeat were dismissed in three states.

The Democrat beat his Republican rival in Georgia by 12,284 votes, according to the audit required by state law.

Mr Biden said he was confident Mr Trump knew he was not going to win and had shown “incredible irresponsibility”.

The Democrat is set to take office in January as the 46th US president.

Mr Biden’s victory margin in the public vote overall stands at more than 5.9 million. His victory in the US Electoral College system, which determines who becomes president, is projected to be 306 to 232.

What happened in Georgia?

On Thursday, Georgia’s Secretary of State, Brad Raffensperger, said the hand audit of ballots had not altered Mr Biden’s victory in the state.

“This is a credit to the hard work of our county and local elections officials who moved quickly to undertake and complete such a momentous task in a short period of time.”

The recount found the error rate was no greater than 0.73% in any county and Mr Biden’s margin of victory over Mr Trump remained at under 0.5%. The results will be certified on Friday.

Trump campaign senior legal adviser Jenna Ellis said the audit had gone “exactly as we expected” because, she said without evidence, the state had recounted illegal ballots.

But Gabriel Sterling, a Republican who serves as Georgia’s voting system implementation manager, told CNN on Thursday: “One of the big complaints is these machines somehow flipped votes or changed votes or did stuff. They didn’t, at least not in Georgia. We proved it.”

During the audit this week, nearly 6,000 untallied votes were found – paring back Mr Biden’s lead slightly – but they were the result of human error and not fraud, Mr Sterling has said.

Officials in Floyd County have fired their election manager over the matter, local media reported on Thursday.

What did Mr Biden say?

He was speaking after a virtual meeting with governors, including Democrats and Republicans, about the coronavirus crisis.

Asked about Mr Trump’s lack of concession, Mr Biden said the president was sending “incredibly damaging messages… to the rest of the world about how democracy functions” and that he would be remembered “as being one of the most irresponsible presidents in American history”.

Of the election result, the Democratic president-elect – who is due to take office in January – said: “The vast majority of people believe it’s legitimate.”

“Having failed to make even a plausible case of widespread fraud or conspiracy before any court of law, the President has now resorted to overt pressure on state and local officials to subvert the will of the people and overturn the election,” he wrote.

“It is difficult to imagine a worse, more undemocratic action by a sitting American President.”

What of the legal challenges?

In a matter of hours on Thursday, Mr Trump’s allies were dealt legal setbacks in Georgia, Arizona and Pennsylvania.

Republicans lost their final lawsuit in Georgia as a court rejected their effort to block the results’ certification, which is due to happen on Friday. The judge who dismissed the case was appointed by Mr Trump last year.

In Arizona, a judge rejected a lawsuit filed last week by the state Republican Party seeking a new audit of ballots in Maricopa County, home to Phoenix – the state capital and largest city.

In Pennsylvania, the Trump campaign lost their bid in state court to throw out more than 2,000 postal ballots.

He railed against the reporting of his team’s legal challenges, saying the media had shown an “irrational pathological hatred for the president”.

Mr Giuliani also said the campaign was withdrawing its last remaining lawsuit in Michigan. He said it had achieved its aim of stopping the certification of the result in one key county.

However, the vice-chairman of Wayne County’s canvassing board said an attempt by its two Republican members to rescind their earlier certification of the result was invalid, and the certification was binding.

One of the Republicans said Mr Trump had called her personally after the vote had been certified “to make sure I was safe”.

Mr Biden won the county by a huge margin, according to unofficial results, and prevailed in Michigan by about 146,000 votes.

What could Trump’s next move be?

One possibility that US media are speculating on is that he will try to get Republican-friendly state legislatures in key states to override the choice of voters and instead select members of the US Electoral College who would be favourable to the president.

Mr Trump has invited Michigan’s Republican lawmakers to the White House on Friday, hinting at a possible change in tactics.

Instead of winning by direct popular vote, a US president must accumulate a majority of “electors” that each state is designated according to its congressional representation.

Most states determine these based on who won the popular vote there.

But federal law says statehouse legislators have the power to pick electors if the state has “failed to make a choice”.

This would appear a long shot as no evidence of electoral fraud has been shown and to potentially disenfranchise millions of voters would spark uproar.

Reuters news agency quoted one source familiar with the Trump strategy as saying it was now a “more targeted approach towards getting the legislators engaged”.

But one of the Michigan lawmakers going to the White House, Mike Shirkey, said earlier this week that the legislature appointing electors was “not going to happen”.