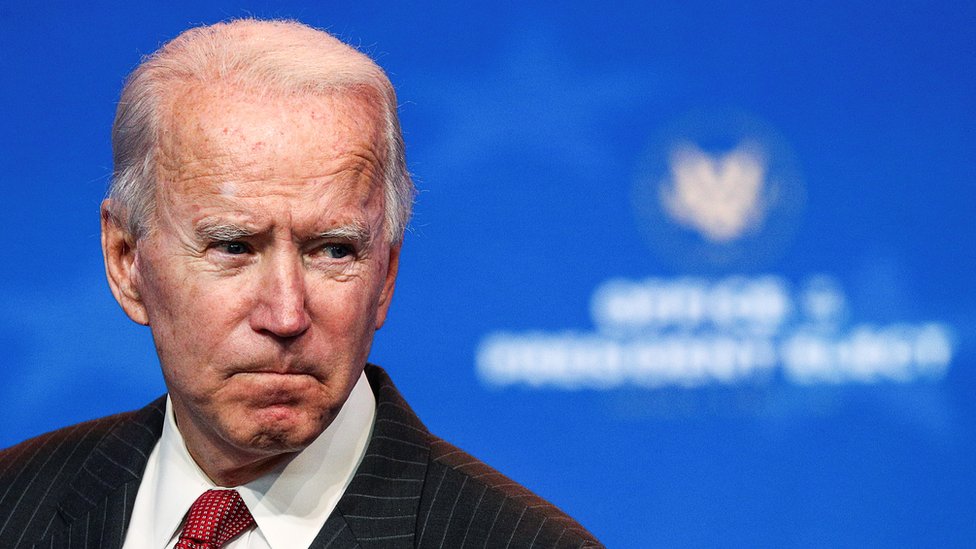 By Barbara Plett UsherBBC State Department correspondentPublishedduration4 hours agomedia captionMike Pompeo in the Golan Heights: “This is a part of Israel and a central part of Israel”In the dying days of Donald Trump’s presidency, one of his most loyal lieutenants was determined to make history.Mike Pompeo became the first US secretary of state to visit…

In the dying days of Donald Trump’s presidency, one of his most loyal lieutenants was determined to make history.

Mike Pompeo became the first US secretary of state to visit a Jewish settlement in the Israeli-occupied West Bank, physically putting his stamp on a Trump administration policy that has embraced the expansionist vision of the Israeli right.

Mr Pompeo already made his mark last year, when he overturned a state department legal opinion that said the settlements were” inconsistent” with international law.

He was also present in Jerusalem when President Trump announced the US would recognise Israeli sovereignty over the occupied Golan Heights, another stop on the secretary of state’s ground-breaking itinerary this week.

Israel seized the West Bank and the Golan Heights during its war with the Arabs in 1967. In the decades since, their fate has been subject to failed peace negotiations, the former with the Palestinians and the latter with the Syrians.

But it was also widely seen as a source of photo opportunities tailored to the Republicans’ evangelical base, should Mr Pompeo decide to run for president in 2024.

And it provided a backdrop to announce new guidelines for labelling settlement products as “Made in Israel” rather than “Made in the West Bank”.

The move was tantamount to the US recognising “de facto Israeli annexation” of much of the West Bank, according to leading Israeli journalist Barak Ravid. It also created another obstacle for President-elect Joe Biden should he decide to roll back Mr Trump’s settlement policy.

Mr Biden has indeed signalled that he would return to the long-standing US position of treating the West Bank and Golan Heights as occupied territory, but it’s not clear how directly he’d confront Mr Trump and Mr Pompeo’s legacy: his aides have indicated that an ambitious plan for peace negotiations with the Palestinians is not on the agenda.

He would probably be most pro-active about repairing diplomatic relations with the Palestinians, which broke down under President Trump, and restoring humanitarian funds for them that the president cut off.

But he is a traditional, pro-Israel Democrat who wouldn’t be breaking new ground. He doesn’t believe that US aid to Israel should come with conditions, as advocated by the left wing of the party. Nor does he plan to reverse Mr Trump’s controversial decision to recognise Jerusalem as Israel’s capital.

The bigger Middle East policy battle is over Iran.

Mr Biden has said he wants to rejoin the nuclear deal abandoned by President Trump, as long as Iran comes back into compliance.

This would upend Mr Trump’s “maximum pressure” policy of squeezing Tehran with crushing sanctions, aimed at forcing Iran to accept a wider agreement curtailing its missile programme and regional interventions, and supported by Israel, Saudi Arabia and the United Arab Emirates (UAE).

In the weeks left before the inauguration, the Trump administration has begun piling on new sanctions that would make it more difficult for President-elect Biden to revive the deal.

The target areas include human rights violations, ballistic missile development and support for militant groups, rather than nuclear activity.

“In principle, Biden as president could waive or suspend nearly all US sanctions,” says Suzanne Maloney, Iran expert at the Brookings Institution in Washington. “In practice, the goal here is to make it politically unpalatable.”

Middle East experts and Democratic officials are also wary of other possible measures such as cyber attacks and even a military strike, after the New York Times reported that Trump had to be talked out of launching one.

“In the end, I do think there will be re-engagement between Washington and Tehran,” says Maloney. “But the challenges facing Team Biden on Iran are pretty steep.”

The Trump administration is also considering designating Yemen’s Houthi rebel movement, which is backed by Iran, as a terrorist organisation.

There may be grounds for doing so under US law. But the move would hamper Mr Biden’s plan to take a new approach to Yemen. He wants to end US support for the war against the Houthis led by Saudi Arabia and the UAE.

Five major aid organisations and 55 Democratic lawmakers have written to Mr Pompeo, warning him the designation would disrupt the fragile UN-led peace process and interrupt the overstretched response to the world’s worst humanitarian crisis.

The move is “being framed in internal deliberations as an expansion of the Trump administration’s ‘maximum pressure’ campaign against Tehran”, according to the International Crisis Group. “Others say discussions of a designation were prompted by direct requests from Saudi Arabia and the United Arab Emirates.”

Mr Pompeo will be visiting both countries as he continues his Middle East trip, a swansong that is as much about a last-ditch effort to increase pressure on Iran as it is about shoring up the Israeli right.