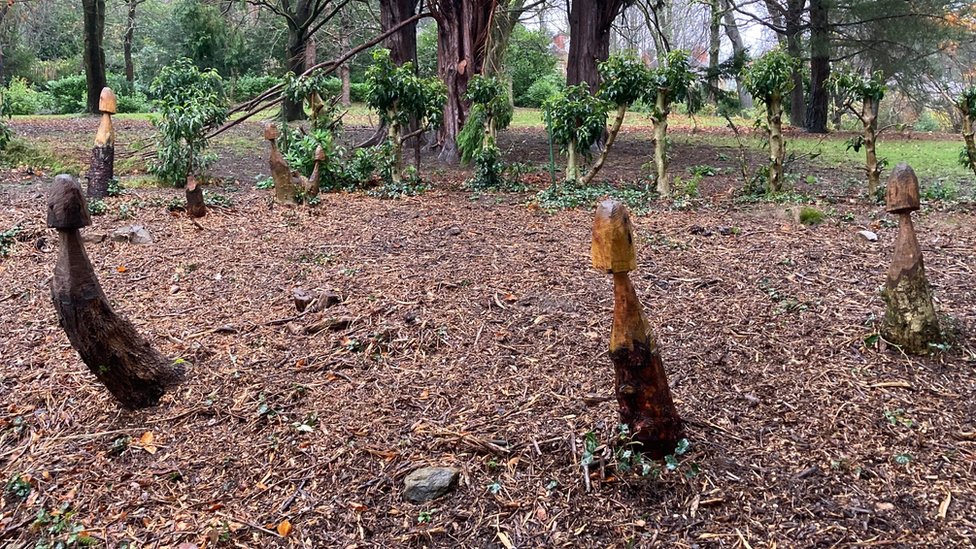 Publishedduration3 hours agoimage captionSome of the mushroom carvings remain at Cwmdonkin ParkSeveral carved wooden mushrooms have been removed from a park after a council received a complaint they looked “unnecessarily phallic”.The wooden features were carved out of tree stumps at Cwmdonkin Park in Uplands, Swansea, last winter by the council parks team.Swansea council said it…

Several carved wooden mushrooms have been removed from a park after a council received a complaint they looked “unnecessarily phallic”.

The wooden features were carved out of tree stumps at Cwmdonkin Park in Uplands, Swansea, last winter by the council parks team.

Swansea council said it has no plans to remove the remaining carvings.

Paul Durden, a co-writer of Twin Town, said many locals oppose the removal.

Uplands councillor Peter May said he was “baffled” when the council removed some of the mushrooms given the complaint he received was largely about “overzealous trimming” of laurel bushes and bay trees in the park.

Mr May said the e-mail noted as “an aside” that some people “objected to [the wooden mushrooms] as unnecessarily phallic”.

“I think they are a good feature of the park, so it was baffling that some were removed,” he added.

The park itself features various references to the Welsh poet Dylan Thomas, including a memorial stone with lines from Fern Hill.

Mr Durden, who lives near the park, said: “I go the park every morning with my dogs and the carvings were beautiful, they’re better than having tree stumps.

“Lots of people are complaining that they have been cut down. You don’t go knocking things down because of one complaint.”

In a statement Swansea council said: “Our parks team has been completing some winter pruning of shrubs to help bring more sunlight to certain parts of the park, along with the removal of some dead trees.

“We previously (last winter) carved some of the tree stumps into mushrooms, creating an ornamental feature and these are still in place.

“A recent complaint about some of the new carvings has led to them being removed.”