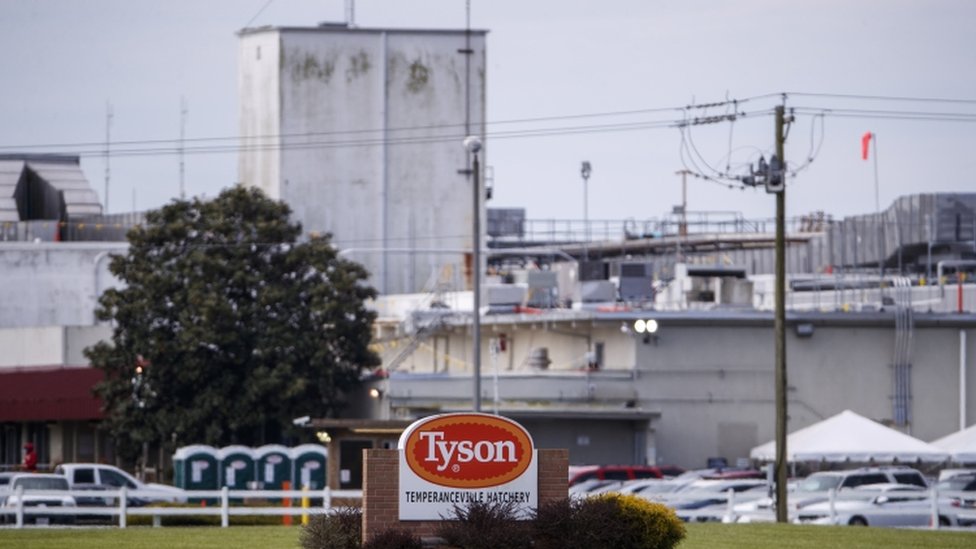 Publishedduration40 minutes agoimage copyrightEPAimage captionTyson’s Waterloo plant closed temporarily amid a Covid-19 outbreak in AprilSupervisors at an Iowa Tyson Foods placed bets on how many workers would become infected with coronavirus as an outbreak raged through the plant this spring, a wrongful death suit alleges. The lawsuit, filed this week by the son of an…

Supervisors at an Iowa Tyson Foods placed bets on how many workers would become infected with coronavirus as an outbreak raged through the plant this spring, a wrongful death suit alleges.

The lawsuit, filed this week by the son of an employee who died with Covid-19, claims the company demonstrated “wanton disregard for worker safety”.

Isidro Fernandez, who died in April, was one of more than 1,000 workers infected amid the plant’s outbreak.

Tyson has called for an investigation.

In a statement, the company said it was “extremely upset” about the accusations and that it had suspended the individuals allegedly involved without pay. “If these claims are confirmed, we’ll take all measures necessary to root out and remove this disturbing behaviour from our company,” the statement said.

Tyson Foods employs some 100,000 workers nationwide. At least five other employees at the Waterloo, Iowa facility died, according to the Associated Press.

According to court records, the company was advised by the county sheriff to shut the plant as infection spread this spring, but it did not. Tony Thompson, the Black Hawk county sheriff, said the facility’s working conditions “shook him to the core”, the filing said.

“Around this time, Defendant Tom Hart, the Plant Manager of the Waterloo facility, organised a cash buy-in, winner-take-all betting pool for supervisors and managers to wager how many employees would test positive for Covid-19,” the lawsuit said.

“On one occasion, Mr Casey intercepted a sick supervisor en-route to get back to work, adding, ‘We all have symptoms. You have a job to do,'” the suit said.

On 12 April, after a spate of infections, the plant was temporarily closed. Mr Fernandez died on 26 April from Covid-19 complications, the lawsuit said.

At the time, Tyson Foods chairman John Tyson took out full-page adverts in the Washington Post and New York Times to warn “the nation’s food supply is breaking”.

“As pork, beef and chicken plants are being forced to close, even for short periods of time, millions of pounds of meat will disappear from the supply chain,” he wrote.

And later that month, President Donald Trump ordered meat processing plants, including Tyson’s Waterloo facility, to stay open to protect the nation’s food supply amid the pandemic. He invoked a Korean War-era law from the 1950s to mandate that the plants continue to function, amid industry warnings of strain on the supply chain.

In its statement on Thursday, Tyson said its “top priority” was the health of its employees, and said it had invested “hundreds of millions of dollars” in its US facilities since the start of the outbreak, putting protective measures like temperature scanners and workstation dividers in place.