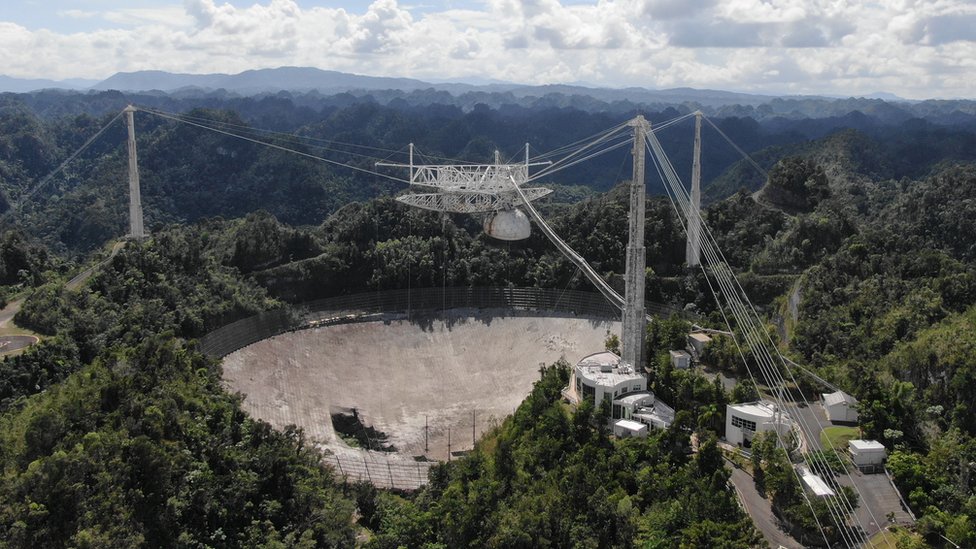 By Paul RinconScience editor, BBC News websitePublishedduration1 hour agoimage copyrightUniversity of Central FloridaThe iconic Arecibo radio telescope in Puerto Rico is to be dismantled amid safety fears, officials have announced.A review found that damage to the 305-metre telescope “dish” was at risk of catastrophic collapse, following damage to its support system.It concluded that the huge…

The iconic Arecibo radio telescope in Puerto Rico is to be dismantled amid safety fears, officials have announced.

A review found that damage to the 305-metre telescope “dish” was at risk of catastrophic collapse, following damage to its support system.

It concluded that the huge structure could not be repaired without posing a potentially deadly risk to construction workers.

The telescope has been a key scientific resource for astronomers for 57 years.

Sethuraman Panchanathan, director of the US National Science Foundation (NSF), which funds the telescope, said in a statement: “NSF prioritises the safety of workers, Arecibo Observatory’s staff and visitors, which makes this decision necessary, although unfortunate.”

Engineers had been examining the structure since August when one of its support cables snapped.

The University of Central Florida, which manages the facility, had come up with a solution to stabilise the structure. But on 6 November, another cable broke.

Based on the stresses acting on the second broken cable, engineers concluded that the remaining cables were probably weaker than previously thought.

The NSF reviewed multiple assessments by independent engineering companies and concluded that the telescope structure was “in danger of a catastrophic failure” and its cables may no longer be capable of carrying the loads they were designed to support.

Furthermore, several assessments stated that any attempts at repairs could put workers in life-threatening danger.

Ralph Gaume, director of NSF’s division of astronomical sciences, said: “Until these assessments came in, our question was not if the observatory should be repaired but how. But in the end, a preponderance of data showed that we simply could not do this safely. And that is a line we cannot cross.”

The foundation will now focus on decommissioning the giant structure, which is surrounded by forest in the western half of the island.

It was built in the early 1960s, with the intention of studying the ionised upper part of Earth’s atmosphere, the ionosphere. But it was soon being used as an all-purpose radio observatory.

Radio astronomy is a field within the larger discipline that observes objects in the Universe by studying them at radio frequencies. A number of cosmic phenomena such as pulsars – magnetised, rotating stars – show emission at radio wavelengths.

The observatory provided the first solid evidence for a type of object known as a neutron star. It was also used to identify the first example of a binary pulsar (two magnetised neutron stars orbiting around a common centre of mass), which earned its discoverers the Nobel Prize in Physics.

The telescope also helped to make the first definitive detection of exoplanets, planetary bodies orbiting other stars, in 1992.

It has also been used to listen for signals from intelligent life elsewhere in the cosmos and to track near-Earth asteroids.

Over the years, the main dish appeared as a location in movies, including Goldeneye, Pierce Brosnan’s first outing as James Bond in 1995, and the 1997 science fiction drama Contact, starring Jodie Foster and Matthew McConaughey.

The Democrat Congresswoman Eddie Bernice Johnson and Republican Congressman Frank Lucas, who are respectively chair and ranking member on the US House Science, Space and Technology Committee, said in a statement that they were “saddened by the loss of the facility”.

They added: “Everyone involved with this facility should be proud of what you have achieved. Arecibo will be remembered for an illustrious scientific legacy.”